Funny hearing stock men talk about farming… the soil temperature was still in the 50’s last week in Nebraska, farmers all over had awful Aprils, don’t need to overthink this too much.

Still way behind. I think last week corn was 20% and beans 9% behind average. Corn isn’t being planted as much this year, but where are all the beans? You think there is still time to get it in the ground? We are past the normal late plant in Nebraska.

There is time to get it in the ground and harvest if things go well. It has been awful for soil temp and moisture. Fields were flooded and cold. I wouldn’t panic yet, but the high gas prices mean that there’s potential to have insanely high drying costs for the harvest and drive food prices through the roof.

What’s the latest you think you can get it in the ground and still harvest?

Mid-to-late June for corn. Those are not outrageous average times for corn planting in the northern states either. Maximizing the harvest and avoiding the drying costs though could get problematic if the weather doesn’t cooperate.

Corn. Maybe take out some long positions on ADM stock. 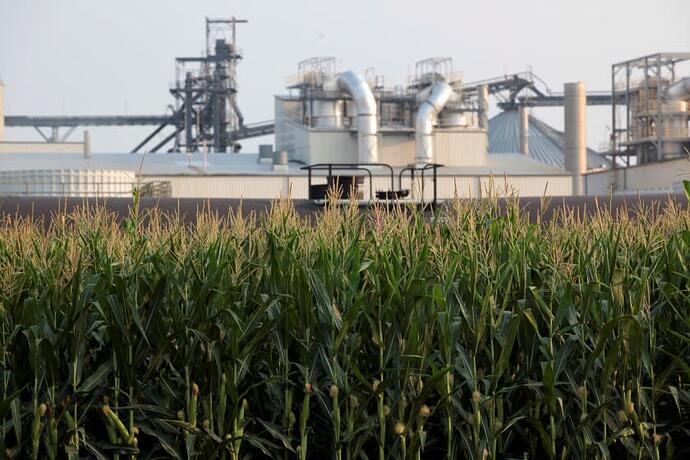 EPA raises amount of ethanol that must be blended with gas

I am not a farmer but more corn as biofuels means less for feeding livestock…
So is there any way to invest in insect farms yet?

So do we think things like CVE, SU, etc. still have room to run?

Energy is the only part of my trading that is doing very well right now. I haven’t exited those positions. Still think the broader market is going down. Given back sizes me chunks of profit though

DUDE you and agg guy? Farmer? We need to talk!

I have some side projects

Cool man, I just noticed this thread and didn’t realize you were an expert trader outside the war thread.

My situation is…I’m about 600k down from the highs. I took profits at the end of last year, although not enough, and was sitting on about 15% cash position. This past month I bought a lot of TQQQ in batches near the lows (might’ve pulled trigger too early). But I plan to hold them long. Crossing my fingers this isn’t a dead cat bounce and we don’t do another leg lower.

I remember in 2018 when the S&P500 was nearing the -20% mark and that ended up being the bottom. When I saw it closing in on the -20% mark again this year I decided to pull the trigger.

Welcome to the thread.

Feel free to post your specific trade ideas. Have had a few that have been inspired by trying to help people make money.

DM me homie. I plant stuff in a small operation with a Kubota L3400 mostly (got some other heavy machinery for work). Know a bunch of bigger guys who make me want to do more.

This sell of is probably just starting! Few understand this!

Update on my train of thought, now that the market is acting as I expected.

I am short and have added to my position. I will remain so for a while longer. In addition to all the reasons we have talked about, the housing market (rate shocked) and corporate earnings expectations also convince me this is still the right play.

HOWEVER, the bear market rally of the last few weeks has me thinking. The play the general public wants is the play that has worked for the last decade. BTFD. Everyone wants to get in front of the fed reversing course and the rocket ship reignites. Is that the trade to make?

Plenty of reasons to think not. Fiscal stimulus rally has ended. All the money that was injected into the economy has worked its way to the markets. Baring a fresh batch of injections, the money is allocated. Outside of our dementia patient in chief, I think most people recognize the role of that stimmy in inflation. So probabilities of more is low.

The fed is still hog tied with respect to rate hikes. They don’t have a lot of room left. Seems counterintuitive that FF only rising to 2% is not bullish. But the counter is would that be enough to tame inflation? Hell no IMO. So if they can’t raise rates, what do they do? More aggressive tapering. They have to remove money from supply. The banks will howl at this. While reality will probably be ok, the apocalyptic messaging from the banks will be epic.

As mentioned the housing market is locked up. MBS are no bid. Effectively that means almost zero mortgage writing. Corporate earnings and guidance are sinking. Inflationary environment with rising rates/decreasing money supply won’t help turn that around.

I said last week 3200 on SP is out of play. That was a technical/market mechanics number. I don’t know where the level is right now. The market has lots of positive gamma to the downside rn, which means making new lows will be hard due to hedged buying. Several hundred points to get through before that changes. My plan now is to manage this position through July and then reassess for the fall.

On the off chance anyone is holding Japanese government bonds, I’d recommend selling them immediately