when keepin it real goes wrong 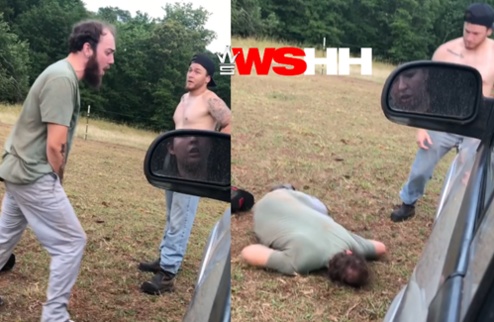 Buddy Gets Put To Sleep For Peeing In Front Of Woman's Daughter! [8 Sec]

Via WORLDSTAR Inbox Posted by Thrillz

LOL he was already a little wobbly after the car headbutt, homeboy just finished the job.

I keep forgetting how stupid some people are… wonder if any of his 4 brain cells survived that hit.

The Windows shut down music made me laugh

That was a solid left hook.

Right on the button. So crisp.

Excellent breakdown in title. Video was short and ended with AOL song.

Also, the guy lectured his KO’d opponent afterwards on how to conduct himself as a man.

I love how he JUST managed to get “You think you can fight?” out before getting the Dan Hardy treatment.

Edit: should have called it the “Tommy Morrison treatment”. ah well, there’s always next year.

Did they cut the video before head-stomps and emptying of the pockets?

Did they cut the video before head-stomps and emptying of the pockets?

They dragged him behind their car afterwards and his head flew right the fuck off.

Love it. No hesitation. When presented with an unstable person closing in on you, knock them the fuck out.

Not related, but I had a routine dental cleaning last month and was waiting in the lobby.

A guy in his early 20’s walked in with his girl. He asked to get an appointment to look at his teeth. Whatever health insurance he presented was expired. They sent him away. The girl was on the phone with somebody and mentioned that it was a cheap shot. This was the first time I experienced the aftermath of getting KO’d. The guy is probably thousands in debt now and carries the shame of getting KO’d out in the street.

Also, I had no cavities that checkup.

I wondered what the story was with that one.

It’s weird that he didn’t go through his pockets and whip him with a belt.