Old school battle of the styles: Wing Chun vs. Sambo

Falkner was the senior student of Duncan Leung for years. Leung was introduced to Ip Man by Bruce Lee, and trained privately with the grandmaster from '55-59. Zinoviev studied judo, boxing, and combat sambo in his native Saint Petersburg, Russia, and had further training with the Russian army and a municipal police force.

The event matchmaker, John Perretti, was a former student of Wing Chun, and had high hopes for Falkner.

“[Zinoviev] has never faced anyone who blocks, punches, and kicks like this guy does, all simultaneously,” said Perretti.

However, Zinoviev, was coming off a win over Mario Sperry. That one earned him the inaugural Extreme Fighting middleweight championship, and broke the myth that the techniques of jiu-jitsu from Brazil were unbeatable.

Falkner warmed up by doing Wing Chun techniques on unresisting students standing around him in a circle.

If you know what your opponent is going to do, and you two are even remotely close in terms of skill, you will win. That’s true at the highest levels of MMA, and it’s true for a sucker punch.

Falkner moved forward aggressively with a lead leg kick. Moments later he did the exact same attack again, and that was all the reads Zinoviev needed. It was already over.

The Russian took Falkner down hard, controlled him from top side control, and finished him shortly afterward with a rear naked choke 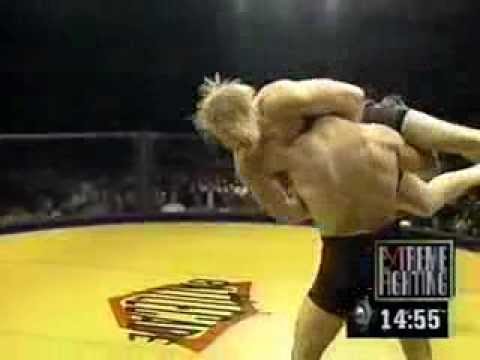 Comically, the lesson for some Wing Chun devotees is that Falkner wasn’t really doing Wing Chun. These individuals are deluded gas bags. What happened to Falkner is exactly what Wing Chun looks like when it’s attempted against someone good.

It cannot and shouldn’t be ignored that Falkner, by all accounts a tremendous exponent of Wing Chun, was utterly hopeless. Wing Chun is yet another art that can be argued for in compelling fashion (“centerline, simplicity, economy of motion, one inch punch, Sticking Hand,Bruce Lee, bil jee”). But it only works on people who don’t know what they are doing, or are much smaller/less gifted physically. So what’s the point? Why learn an art that only works on even worse approaches to self-protection?

Wing Chun is demonstrably worthless against a trained fighter. Wing Chun exponents have very occasionally enjoyed very low-level success when actually trying it against someone with some degree of training, but to do so, they typically end up discarding all the things that make Wing Chun a distinct art.

Whether on the street or arena, there are abundant examples of many martial arts working spectacularly, by executing the techniques and methods of their art. Boxing technique works, judo works, Kyokushin karate works, sanda works, jiu-jitsu works, MMA works, combat sambo works, and one can go on and on. Unfortunately, when it is genuinely pressure tested, Wing Chun, if it appears at all, disappears into sloppy, hapless boxing.

Unfortunately, one area where Wing Chun hugely excels is convincing students that it works, even though it doesn’t, and everyone can see that. It’s true that Wing Chun looks awesome in demonstrations or in movies. But that’s it.

Falkner on the other hand should be commended for being brave enough to enter the cage and defend his style. He took the fight on one day’s notice when there was a dropout on the card, and didn’t even know who he was going to fight. The man literally did it for fun and a few bucks. And he never said he was the greatest WC fighter on Earth; that was just the hyperbole typical of MMA event promotions then and now.

Steve Falkner was legitimately a highly trained expert in Wing Chun. Unlike many in the field, he has never courted attention, and has led a truly remarkable life in the martial arts, which included living in and teaching at a high level in China for many years. And China is just one of many countries he has taught in. He currently resides in Gardner, Kansas. You can reach Steve Falker here and here.

Perhaps the biggest lesson is that Battlecade Extreme Fighting and John Perretti are hugely underappreciated. Through a circuitous arrangement, Penthouse magazine founder Bob Guccione Sr came to bankroll the pioneering MMA show Battlecade: Extreme Fighting. Although the promotion only put on four events before ceasing operations, it remains unheralded but important in the early history of the sport. This is largely due to Perretti, a black belt student of “Judo” Gene LeBell and matchmaker for the event.

Battlecade 1 was forced away from a planned debut in New York due to pressure from both a State Senator and from then UFC owner Bob Meyrowitz. So the second event was held at The Kahnawake Mohawk Indian Reservation in Quebec, Canada. While the reservation had the right to conduct combat sports events, the provincial authorities threatened to arrest both staff and fighters, and blocked the television signal. And then UFC parent company SEG tried to rent the arena away from them.

But the show went on, barely - a satellite truck arrived just 30 minutes before start time.

Late that night a number of the fighters were arrested at their hotel. Perretti, who had already departed, returned and asked that he be arrested, too. Guccione got the charges dropped and gave everyone $1,000 each for their trouble. Due to the fighters who did not make it due to threats and arrests, the event was not long enough to meet the PPV minimum.

There would be two more events, that were each in their way important to the development of the sport. For example, EF3 saw the debut of 3x5 minute rounds. The subsequent shows had not yet reached profitability, and with Penthouse magazine experiencing financial issues of its own, the league closed shortly after EF4 on March 28, 1997.

The road of exploration is littered with the bodies of brave explorers. Extreme Fighting featured world-class athletes, wearing mandatory fingerless gloves, fighting for three, five-minute rounds. It would take the rest of the sport years to catch up.

Zinoviev went on to fight internationally, and, in his final fight, to challenge for the UFC middleweight title vs. Frank Shamrock. He then became a coach, most prominently for the IFL Bears. He has also done extensive personal security work, including for disgraced financier Jeffrey Epstein. Zinoviev, who had no knowledge of the crimes Epstein killed himself over, now lives in New Jersey, and has a son who is skilled in judo.

Perretti lives in New York, and can be reached via johnperretti.com. And the sport of MMA, it’s now very mainstream, something that could barely be imagined then.