Obviously the people that mattered bought that defense. Bleeding heart faggots that have never seen someone on pcp. Dude was like Luke Cage on a rampage.

The reverse happened on the O.J. Simpson trial. Since the murder happened in Brentwood, normally the trial would have been held in Santa Monica, but the DA wanted to be able to do a press briefing every day from his office downtown and get in front of the camera, so it was held downtown with jurors drawn from south central and nearby, almost guaranteeing the outcome. I had to go to the federal courthouse across the street from the county courthouse a lot of days, it really was like a damn circus outside the trial - huge towers erected to accomodate the media camera crews, non-stop TV reportage, crowds of the curious, street performers and evangelists working the crowds, everything but dancing bears.

That video you linked contained the edited video, dude.

What about dancing Itos?

Yeah, it was bizarre seeing that on Jay Leno every night during a murder trial. I had an apartment in Brentwood at the time, a couple of blocks from the murder scene. I would go out for a jog, cut through the neighborhood and then start my run down San Vicente Boulevard towards the ocean. Every hour, day and night, there were cars full of ghouls backed up to drive past the murder scene. They finally had to station a police officer there to ticket anyone who slowed down to see it.

I remember watching that dude Kato and be like WTF this mofo gets paid to just live in some rich black dude’s house, stay in the pool house and chill and look good all day? daaaaaamn son, where did I go wrong? I wanna be a professional chiller too lol some characters that saga contained lol

It definitely was weird to see but the point was to show what a circus the whole thing was and even the judge was enjoying his time in the limelight. Just look at all of the people who gained notoriety from being involved. Furman is a best selling author, the Kardashians have now money than God, even the guy from tmz (way before tmz existed) used to hang out with his handheld recorder and interview all the players on their way in to the courthouse

also media refused to show early footage when Rodney rag dolled the CHIPS. Nowadays I think they would have shot his ass.

There was a lot to them getting off. A lot it was due to an activist City Councilor banning fundamental, humane and commonsensical techniques like wrestling the suspect. Literally, she was outraged that any cop had avoided prison by stating the suspect was wrestling for their gun, so she banned wrestling suspects altogether. She required that they strike with batons until the suspects complied and laid face down with their arms behind their back.

What happens when you have someone on drugs or just amped up simpy refusing to comply? You’re not allowed to simply wrestle their arms behind their back, you have to keep striking and giving verbal commands until they do comply (which may never happen). Their defense was that government had REQUIRED strikes instead mored humane, commmonsensical techniques, and had incontrovertible proof that they wouldn’t have done it unless he actively resisting them (the 2 other guys in the car who were arrested without incident because they didn’t resist).

The sergeant at the scene realized that this insane policy was eventually going to kill this guy, so he finally ordered his men to disregard the policy and simply wrestle the guy’s hands behind his back and cuff him. His reward for breaking the rules to end this horrible incident? Years in prison even though he never struck King himself at all (except for an ineffective taser at the beginning).

If you think anyone learned their lesson from this, you’re wrong, because activists pushed heavily to restore this policy in wake of GF.

Thanks for the recap. I don’t remember the policy juggling, I was in HS at the time and paying attention to nightly news and papers only. No internet back then

Same thing is going on today. The prosecution witness on MPD’s use of force policies so demolished the prosecution’s case that the defense called him as a witness, not just did cross. Contrast and compare the coverage of the case by CNN, which has a vested interest in the riots occurring (hey, they’ve got to do something for ratings now that Trump is gone), with Legal Insurrection’s coverage. Day 8 was huge, and essentially destroyed most of the defense’s case. He may still be convicted as a sacrifici
al victim, but one never knows for sure what a jury will do., 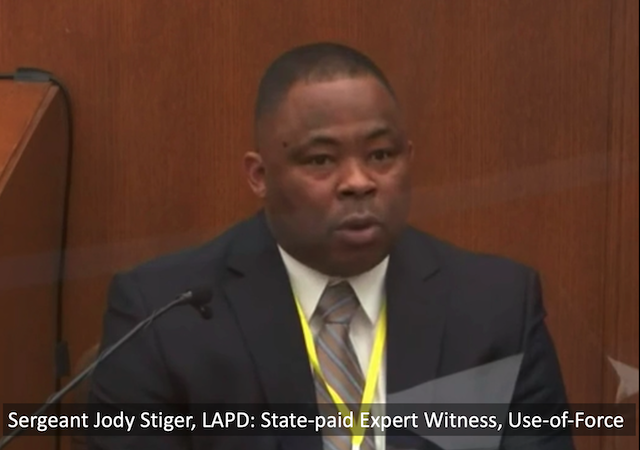 LIVE: Chauvin Trial Day 8 – Will State’s Non-MPD Use of Force Expert Save...

That is super interesting. I have never heard that before. Is it documented anywhere? Loved your war with Kimbo BTW!

I’m guessing they’ll “split the baby” to some degree somewhere.