I tweet a lot about wmma and do my own wmma facebook page. So I thought instead of spamming the WMMA stuff all over the forum. So that I can post more stuff I would just make my own thread for my WMMA related material that I will add from time to time. If this is a issue. My bad. Close it down.

Jessica Eye is making her UFC debut against Sarah Kaufman at UFC 166, October 19th on the Fox Sports 1 portion of the Card. Jessica Eye is officially moving up in weight class after competing in Bellator in the 125lb Division. Jessica most recently competed in a Catchweight bout against Carina Damn at 133lb.

Jessica Eye Interview on on Local Ohio Radio Station about her UFC Debut. These guys were total old fogies and kind of mean.

Two Bantamweight beatdowns from the past week. Both with good TKO finishes.

Raquel  sits by the fire and reads the words of encouragement left by her family and friends.

Rosi Sexton is an MMA Veteran. Some have said she is too small for the UFC. They are probably right. But she took Alexis Davis the distance at UFC 161.

Rosi Sexton's next match is against Jessica Andrade at the UFC Manchester card. And just like all the UFC women Rosi has been working hard to promote The UFC brand.

From September: Gina Carano working her takedowns at Black House MMA with some nice shin bruises

limited edition 2-pack of Ronda Rousey & Liz Carmouche (Official) celebrating the 1st ever UFC Women's Championship fight at UFC 157! Only 1000 individually numbered units will ever be made!

Ronda Rousey recently on the set on the Expendables 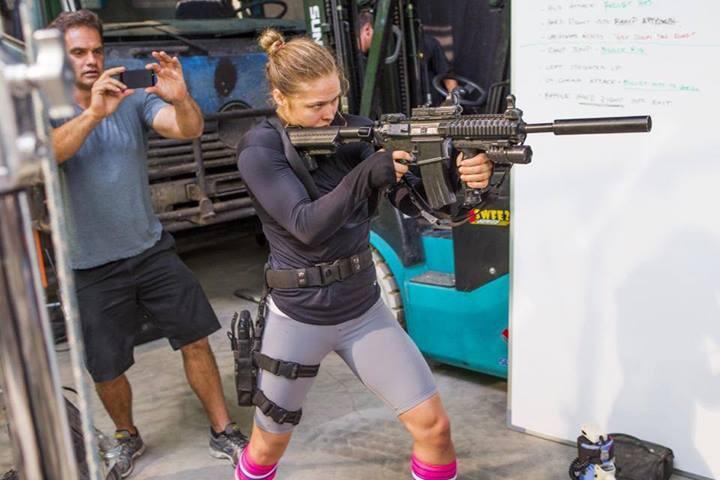 Ronda Rousey recently flew #TeamRousey's Michael Wooten & his coach UFC Vet JAson Tan over to help her Train in Bulgaria on the set of the Expendables 3.

Not high level news but a young lady I train had her first ammy fight tonight and 6'0" tall 135lb Katie "Beast" Mosley got submission of the night with a standing McKenzie guillotine, a result of some crisp striking that caused her opponent to take an ill advised shot.
Nice job Kate!!

Interview and Photos of Jessica Eye during the final stages of training camp for her UFC debut against Sarah Kaufman at UFC 166. The fight will air on the FOX SPORTS 1 portion of the broadcast.

Love the behind the scenes stuff. I don't understand why every camp doesn't have their own major MMA web show.

Who doesn't have a cell phone with a camera? Or a computer to edit with. It's not hard.

Two Brazilian WMMA Beatdowns from this past week.

In a few more fight we could see Larisso in Invicta or maybe UFC. She is 8-0. Make you wonder why the UFc signed a 1-0 russian.

Ju Thai is signed with Invicta but was controlled and mauled in the usa. Here she is taking it out on a pro debuter.

Kirik, How about starting a womens MMA section of the Underground?

You could let pegson123 be the Mod,run the show.

Kirik, How about starting a womens MMA section of the Underground?

You could let pegson123 be the Mod,run the show.

yeah, and start a transgender MMA section and let CRE be the mod/run it/ plus start fights with himself/tuck himself/post stupid rap videos to himself. basically we could contain him (much like fenris in his fetters) to one section no one else would go to

great thread! but long. I didn't read/watch all of it yet...

interesting with the S&C training of Eye.

Here is Ronda Rousey's most recent Vlog (No. 16) It contains a bunch of random clips compiled into a 10 minute package

The most recent epsiode of the #TeamKristin Ultimate Fighter review. These girls are pretty funny. You should definitely check this episode out and go back and watch the previous 5 at http://www.youtube.com/user/womensmmaroundup/search?query=%23TeamKristin

Sabah born Ann Osman will be representing Malaysia as the first female MMA fighter in the upcoming ONE FC championship in Singapore.

UFC Fight For The Troops Poster: Liz Carmouche and Alexis Davis will be co-main event