Perfect storm of events at my house

Yesterday, I was just waking up at about 6:15 a.m. in my hotel room.  I was going to have an easy morning and then head home in the afternoon.  My wife then texted me the following picture and called and said the garage door broke. 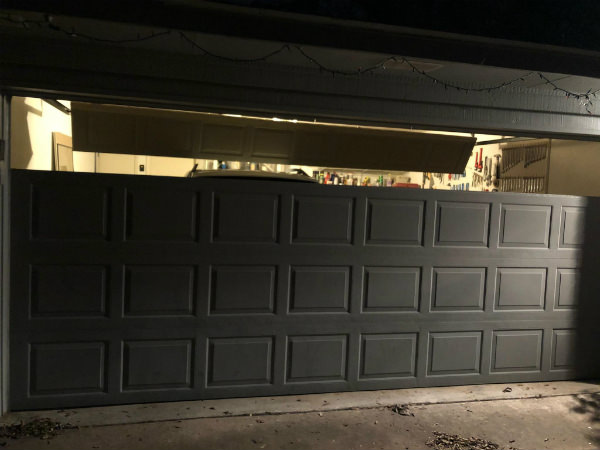 I drove straight home to get the vehicle out of the garage, assess the damage, and reset the panel on the garage door.

After a thorough interregation of my wife, and then my mom, I found out exactly what happened.

Approx. 6:05 a.m., my wife attempts to open the garage door.  It starts going up, then goes back down after making a loud noise.  The torsion spring broke and this is why the door would not open.  She attempted to open the door again, and it again went up a short distance and came back down.  She thought maybe my mom was outside trying to open the door, since she comes over to pick up our kids about that time.

After the second attempt at opening the door, my wife decided to take the kids inside and go out the front door.  At approximately the same time that this happened, my mom walked up to the house.  She attemped to open the garage door from the outside.  It went up a short distance and came back down.  She thought my wife was trying to open it from the inside and then tried again.  This is now the fourth attempt at opening the door without the assistance of the now broken torsion spring.  On the fourth attempt, the hinges on the door all were broken at this point and the top section of the door went up via the garage door opener.

What's not include in the pic is after 10 minutes, the auto closer attempted to close the garage door, which was just the top section, which then caused the door to go off the tract and land on the vehicle in the garage.

well, he is correct about OP