Phil Davis:"Pulling out of fight feels like a loss 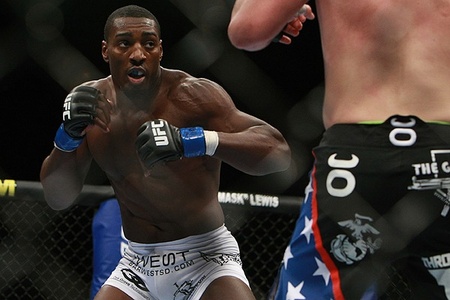 "I wanted to fight, but I think Dana White has had more experience with my personality-type. I think he made a good call. But being the person I am, I don't like to back out. I don't think it's a defeat necessary, but somehow it feels like a loss. There's no saying 'uncle'. Right now, I'm just doing some rehab, some therapy. I will start doing some training this week. I just want to get healthy. I'm not looking at a strict time line. That's how you end up with disappointment. I just want to be healthy."

-- Phil Davis may not be as distraught as he first was when Dana White originally forced him out of his scheduled UFC 133 match-up against Rashad Evans but he is most certainly still feeling the effects of that decision. "Mr. Wonderful" suffered an injury (that he doesn't care to get into the specifics of) which was apparently serious enough that White felt it necessary to rearrange a main event of a major pay-per-view just three weeks away from showtime. This didn't sit well with Davis, who simply wanted to push through and have his moment under the bright lights. However, upon second viewing he feels (via ESPN) as though his UFC bosses made the right call in sending him to the training room for some repairs. When he does return, he'll do so better than ever but against who? Seeing as his injury should only sideline him for maybe another week or so, who should he be matched up against for his next outing? If you've got ideas, feel free to share.

Phil is a great fighter and an injury is an injury. He should take time to heal up and train light - far from a loss.

Shit, usually if I don't pull out I end up worrying about taking a loss. Never been in a fight though.

...might ruin Davis at this stage of his career.

Call me crazy, but I think that an injured Phil Davis could have edged out Mr. Sugar Hashad.

Now that he's out of this fight....give him the time off that he originally asked for and stated that he would be taking. Dude needs to add to his toolbelt, he's not evolving enough because he's always got a specific fight on the horizon.

GriffinQ -  Now that he's out of this fight....give him the time off that he originally asked for and stated that he would be taking. Dude needs to add to his toolbelt, he's not evolving enough because he's always got a specific fight on the horizon.

I agree, and I think that's what he'll take this time to do. If you look at the LHW division, the top 5 are for the most part locked in to different fights with the exception of machida. Once the dust settles from Tito/Rashad and Rampage/Jones, I think it will make way for Phil who will probably only need 1 to 2 more wins to get a crack at the title. I hope they give Davis that time to expand on his game, because he is a threat to a lot of guys in that division, and with some improved stand up he can be a hard match for anyone

This post is full of teh ghey and teh bad aids.

1) Anything by Geno Mrosko is ghey.

2) One man talks about "pulling out" of another man

3) Anything by Geno Mrosko is ghey.