Pineapple on pizza debate is finally OVER 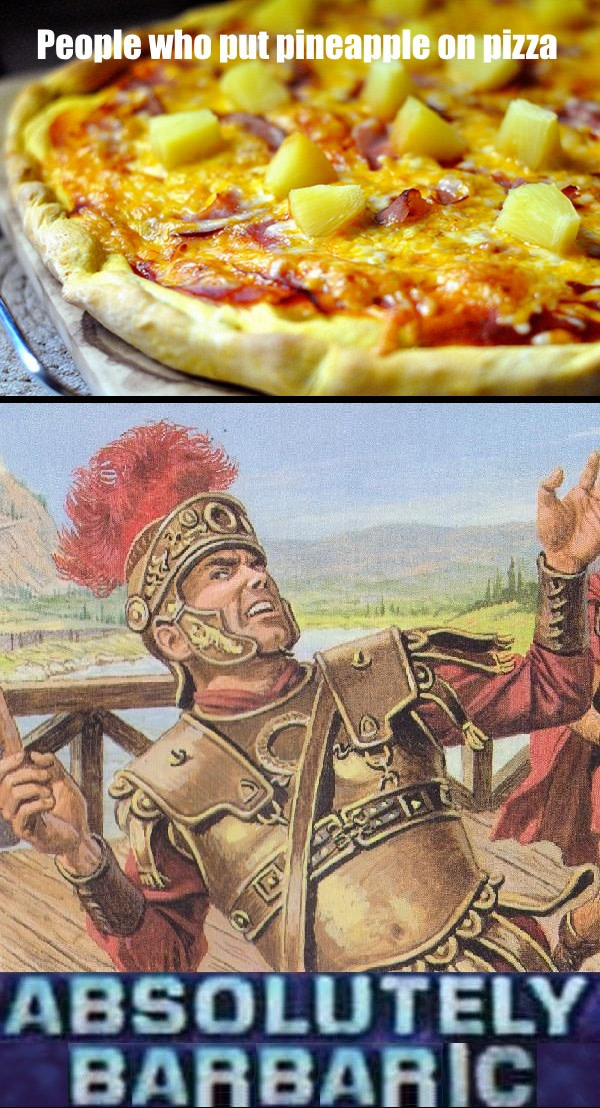 Had a half meat lover and half vegetarian w/pineapple last night ... I'll knife fight that loud mouth fucking Brit if he even looks at me funny.

Yeah fuck that stupid asshole right in his stupid face.  Never trust a man that has a One Direction haircut.  Fuck you Gordon Ramsey you god damn asshole!

add some hot peppers to the pineapple pizza and I'm in

When did this become a fucken thing? Not having a Hawaiian Pizza, but to bitch about it?


Is it a Canadian thing? We've always had that shit, Kids always ordered basically 3 types, cheese, pepp, and fucken Hawaiian ...


Personally, I did not like it, and if I was stuck, id pick off that shit, but still why is this a big thing right now all over social media and here?

I love pineapple on everything

I like pineapple cooked on a pizza but then remove it once it's done. I love the flavor it adds but don't like biting into fruit on a fucking pizza.

And either way, it sucks balls cold. One or two meats with veggies is the best. Too many types of meat ruins the pizza unless you're just really craving salt.

The only fruit that belongs on a pizza is tomato.

Hawaiian pizza is one of Canada's WORST inventions.

KeezyDoesIt - The only fruit that belongs on a pizza is tomato.

100% agree although i beg to differ about tomato being a fruit lol.  It's a vegetable

King Trav - Hawaiian pizza is one of Canada's WORST inventions.

Everything about Canada is the worst.  But yes Hawaiian pizza is putrid

If antifa really hated facism, they'd be out fighting all these motherfuckers who seem to want total control of people's food preferences.

I don't like pineapple on pizza, but I support every person's basic right to eat whatever they want in peace.