Pitbull doing his thing in Miami! 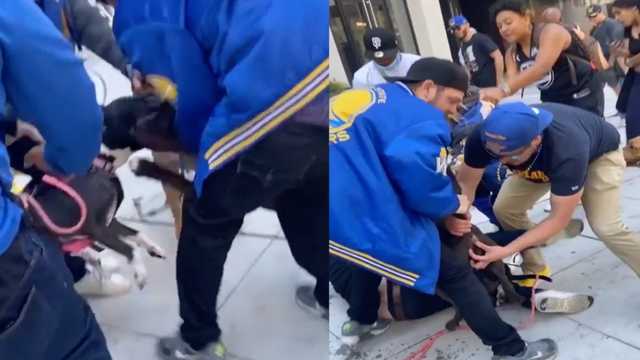 This Can’t Be Real: Two Pitbulls Viciously Attack Each Other At The Warriors...

Im a huge supporter of pit bulls and they get a bad rap, it really is the bad owners and breeders, they are the ones who need to be put down.

Unpopular opinion right there on this forum lol

I thought owning a pibble was banned? AT least they should be. Most owners are irresponsible when it comes to pibbles.

This Can’t Be Real: Two Pitbulls Viciously Attack Each Other At The Warriors...

In certain areas, they are where I live but its not enforced at all. They were banned in Ontario in 2005 and the liberals passed bill 132 because they needed to deflect from how shitty they were. At the time there was not one single fatality in Canada by a pit bull the only stat they had was 53 fatalities by dogs in the last 100 years and 30 something of those were “sled dogs”

The man behind the ban was Michael Bryant, our attorney General who funny enough got drunk and killed a guy on a bicycle, so he has more fatalities than all pits combined. He was also given a doggy line up on city TV to point out the pit bull and he failed, like really dude they gave phots of only purebred dogs like shepherds and labs chihuahua etc and you are trying to ban the breed you cant even identify? Even the morons on tgis forum are smarter than that lol

When the ban happened there was a 2 month grace period to follow the laws (muzzle, 6 foot leash etc) and day one it was passed I walked my 2 pits and had so many people yelling at me from the car, or riding by on a bike saying kill those dogs etc, had the police called on me and when stopped I had to inform him the laws that I have 2 months before i have to muzzle them, the coos had no clue who was to enforce the ban, ended up being by-law even though its a provincial ban and by-law is municipal. By the time october hit and you had to muzzle them nobody cared or noticed,

WTF would you bring your dog, let alone pitbull, to a mass event such as this? Warriors fans… as stupid as their team.

Arent they from san fran? Dont they allow peoole to shoplift and do drugs on the street?

Not the most logical bunch there