A brawl broke out at a High League promotional event in Poland last weekend when pro boxer and World Champion Ewa Brodnicka shoved a sex toy in the face of her opponent, MMA fighter Aniela Bogusz. 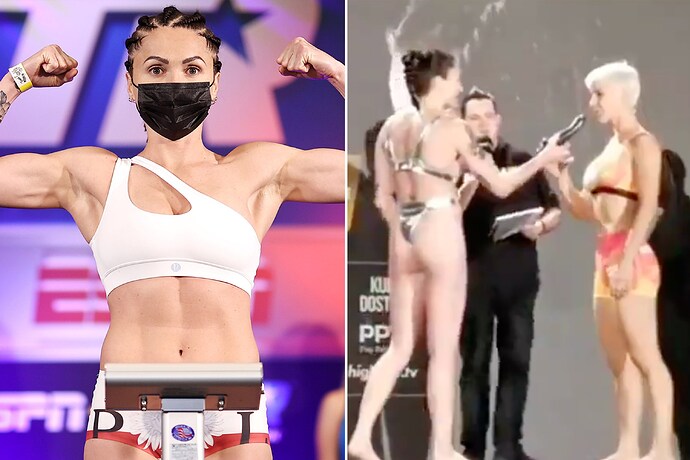 Pro boxer and World Champion Ewa Brodnicka shoved a sex toy in the face of her opponent, Aniela Bogusz.

The pair exchanged words before Brodnicka hit Bogusz in the face, prompting Bogusz to kick her — which led to security separating both fighters.

Brodnicka and Bogusz then took turns grabbing the mediator’s microphone to spew insults at each other before things became physical again.

Maybe it was an invite?

I guess the NY Post and I have different definitions of the word “brawl.”

The brawl was mostly peaceful, friendly even 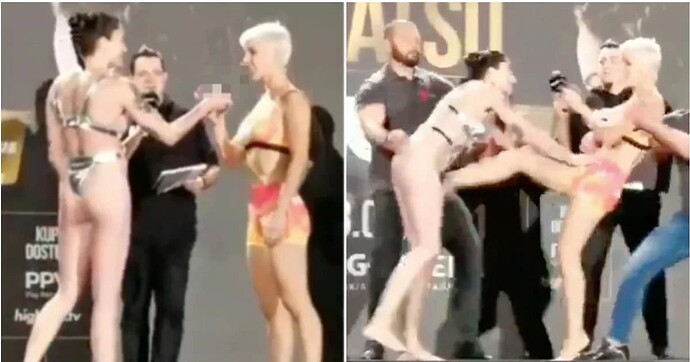 At UFC 30 (first Zuffa owned event) Baroni was comming out fot the first fight on the main card and I was cornering him with Kieth Trimble (great guy and coach). Phil stats yelling that he needs single dollars bills (insert go fund me joke). I didnt get why he needed them but he said he needed “a bunch of singles.” This is litterally a few min before his walkout to fight Curtis Stout. I ran out with a $10 or $20 dollar bill (i forget). There was a line 20 yards long for beer so I run to people and start asking if anyone had 5 singles. Someone said yes and I handed them the 10 or $20 bill I had in my hand. I ran back just as they were playing Phil’s music and he grabbed them from me and I wasn’t quite sure what he did with them at this point.

At the conclusion of the fight Phil had won unanimous decision all three rounds in the eyes of the judges and I forget who the referee was. As they were standing in the middle of the Octagon waiting for the decision to be announced, Phil approached Curtis and started pointing at him. He then reached down into his shorts and took out the seeaty singles and threw them at Curtis Stout for having made comments about Phil not being a fighter and referring to him as a male stripper. I don’t actually recall if any of the money hit him in the chest or face but I can sure you the singles were soaked in sweat after been in his shorts and fighting for three rounds.

I don’t know if that’s as impressive is fighting with a toothpick in your mouth, or glass eye in your head but its fun story that I like to share sometimes and I’m proud to have been a part of it

Opponent should have sucked the head and slid it down ger bottoms, Boom theres your followers baby. Blown opportunity. Only thing that would have been hotter is if she would have pinned her opponent down on her belly and stuck it in her ass in front of the crowd

For those curious, Ewa Brodnicka lost via 3rd round TKO.

Did that not make it on the broadcast ? Why is this not common Og/ug knowledge?

if the opponent was fallon fox, it may have been funny

Did that not make it on the broadcast ? Why is this not common Og/ug knowledge?

Ive told the story here before but UFC 30 was quite some time ago. Also UFC 30 until about UFC 75 what’s considered the Dark Ages and getting DVDs for that era was very difficult for a long time. I don’t know if they gave him the microphone or he took it in the middle of the ring but he did actually mention and thank me by name in his post-fight interview. It was a nice and an appreciated gesture. I remember getting all pumped up hearing it because I had a fight the following night at The Vanderbuilt on Long Island. A Neglia show. It gave me an “Eye of the Tiger” boost and I won the next day. Lol

Neither of them are MMA fighter. These are freak shows between social personalities.