Not just drawings, but full custom minis too. 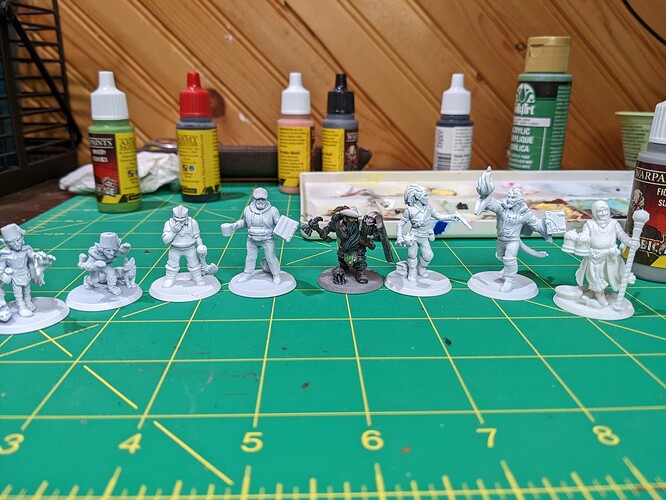 Spoiler alert: the butchers are as efficient as a government road crew.

Meanwhile in the cave of Micess’gay…

i’ll get lost in a cave right now, i don’t give a fuck

also, we need to talk about goat butter

Is this the goat butter used to ease the penetration into Micess’gay? Man, that place is full of shafts.

When we left the gang last they were in the dreaded caves of micess’gay (pronounced mike is gay) and they’d just finished battling through a couple of rooms full of Drow while
Grimple and Gilbert napped. After a search of the room a trapdoor revealed a long, dark, deep shaft leading father down…

The gang drained and injured from battle decide another rest was in order before contemplating their next steps. On the first watch Gilbert noticed some scuffling and what sounded like goblin whispers coming from the hall. Using a minor illusion the half elf was able to trick the scouting goblins into thinking they’d ran into another band of goblins and chased them off.

Second shift of watch went to Moe and Curly. The boys’ tireless and unwavering vigil kept the party safe for another couple of hours. Heroes if ever you saw heroes.

And then came Kelren’s watch……

Kelren and Barsat taking last watch made sense to everyone and would’ve been fine had it not been for Kelren noticing that with the liquor they had on their persons and the liquor in the bag of holding he only had enough liquor for a few days…week tops. Realizing this and remembering the storage room full off wine and whiskey casks Kelren left Barsat to guard the gang while he set of to replenish his dwindling liquor supplies.

After getting lost and doing the “Grimple lap” Kelren finally remembered where the room he was looking for. The problem Kelren would find in discovering the coveted room of liquor was that the goblin scouts from earlier had gone and got the rest of their raiding party and were on their way to fight these new goblins in their territory. Kelren rounded a corner to run into a large group of goblins and worg.

A quick skirmish ensued with Kelren breaking off to run back to the party casting everything he could to slow and damage the chasing goblins and worg.

Managing to make it back to the room where the gang was camped the goblins were promptly dispatched.

Once all the dust settled and enough dismembered goblin parts were thrown at Kelren the discussion of the next move for the party took place. Let me tell you…this was a looooong discussion. In that time Gilbert was able to piece together that these drow must be some sort of scout/raiding party and the duegar and goblin are likely their slaves. Making the shaft a likely entrance to the underdark.

Finding nothing but and empty cavern Curly told the party there was nothing to see down there and they could move on.

That made the decision easy. Kelren shaped the stone floor and sealed the edges of the trap door shut and the party moved on to leave the caves of micess’gay.

Continuing down the only hall they could they came across a couple of more traps but these were fresh and appeared to be goblin made. There was a quick battle with a few more goblins who’d gone off on their own to loot followed by another sort of long discussion about whether or not escape through a chimney shaft too small to even fit the gnomes was possible before Gilbert noticed something was off. Moe was gone!

An unsuccessful attempt to track the handsome gnome by Grimple lead kelren to cast locate object to find Moe’s trusted fez. The Druid lead the remaining party members back to the room they camped in finding that someone had used some of the goblin and drow weapons to pry open a hole in the trap door just big enough for a gnome….

Tune in next week for the continuing adventures of The Butchers of Mischief!

the butchers rolling up…