A Trump fanatic from Illinois who was on the Secret Service's radar for making a death threat against Joe Biden was arrested Wednesday afternoon after she drove into Manhattan armed with 18 knives, pulled up near the USNS Comfort hospital ship and manically declared 'I'm the coronavirus!' sources exclusively told DailyMail.com.

Jessica Prim, 37, of Peoria, driving a silver Toyota Tundra with Illinois license plates, initially pulled up to the USS Intrepid museum, a few blocks south of the USNS Comfort, a hospital ship that was sent to New York Harbor to aid in the coronavirus fight.
A security guard for the Intrepid flagged down NYPD cops, who were stationed nearby. As the officers approached, Prim was breathing heavily and trembling, while uttering a series of cryptic comments.

She broadcast much of the exchange on Facebook Live. 'I felt like I had to come here to this ship because I need help,' Prim cried in the video. 'I feel like I'm the coronavirus.'

They called for an ambulance and then discovered that she was wanted by the Secret Service for making threats against former Vice President Biden, as well as Hillary Clinton and lobbyist Tony Podesta.

A law enforcement alert had been issued earlier in the day with her name and license number.

Prim posted a message on Facebook hours earlier stating: 'Hillary Clinton and her assistant, Joe Biden and Tony podesta need to be taken out in the name of Babylon! I can't be set free without them gone. Wake me up!!!!!'

During her apparent road trip, Prim flooded her Facebook page with laudatory videos featuring Trump and messages of support for the president.

'Do not touch our president Donald Trump,' she declared in another.

'Give me strength God,' she wrote hours before showing up on the West Side, reacting to a May 2010 tweet she posted from the president that states: 'My campaign for president was conclusively spied on. Nothing like this has ever happened in American politics. A really bad situation. TREASON means long jail sentences, and this was TREASON!'
Prim also blasted some of Trump's favorite political targets and spread conspiracy theories about them.

In one Facebook Live session, she described a 'dark web' video she purportedly saw in which 'Hillary Clinton and her assistant tied up some girl to a tree, cut her face off, tore her intestines out, hung it around their neck and was dancing around.'

'You've got to understand that all hell's about to break loose on this planet and you're going to have to stand up for yourself and your kids,' she added. 'God will judge who the good ones are.'
'I really trust Trump,' she continued. 'He really helps me figure this out.'

That bitch must be a great lay

But this one's different. She posted her crazy shit on Facebook.

That bitch must be a great lay

why would she threaten to kill Biden?

Does she not have a couple of days to wait for nature to do it?

the guy is already half dead

She went to the Intrepid instead lol.

They should've just rolled over her with a fighter plane.

How the fuck can you not tell the difference between an iconic World War 2 aircraft carrier and a hospital ship???

Bitch tried to board a ship with guns and military vehicles all over it... With knives.

Insane people definitely flock to the Qanon stuff. One nut is actually using it as an insanity defense for a murder 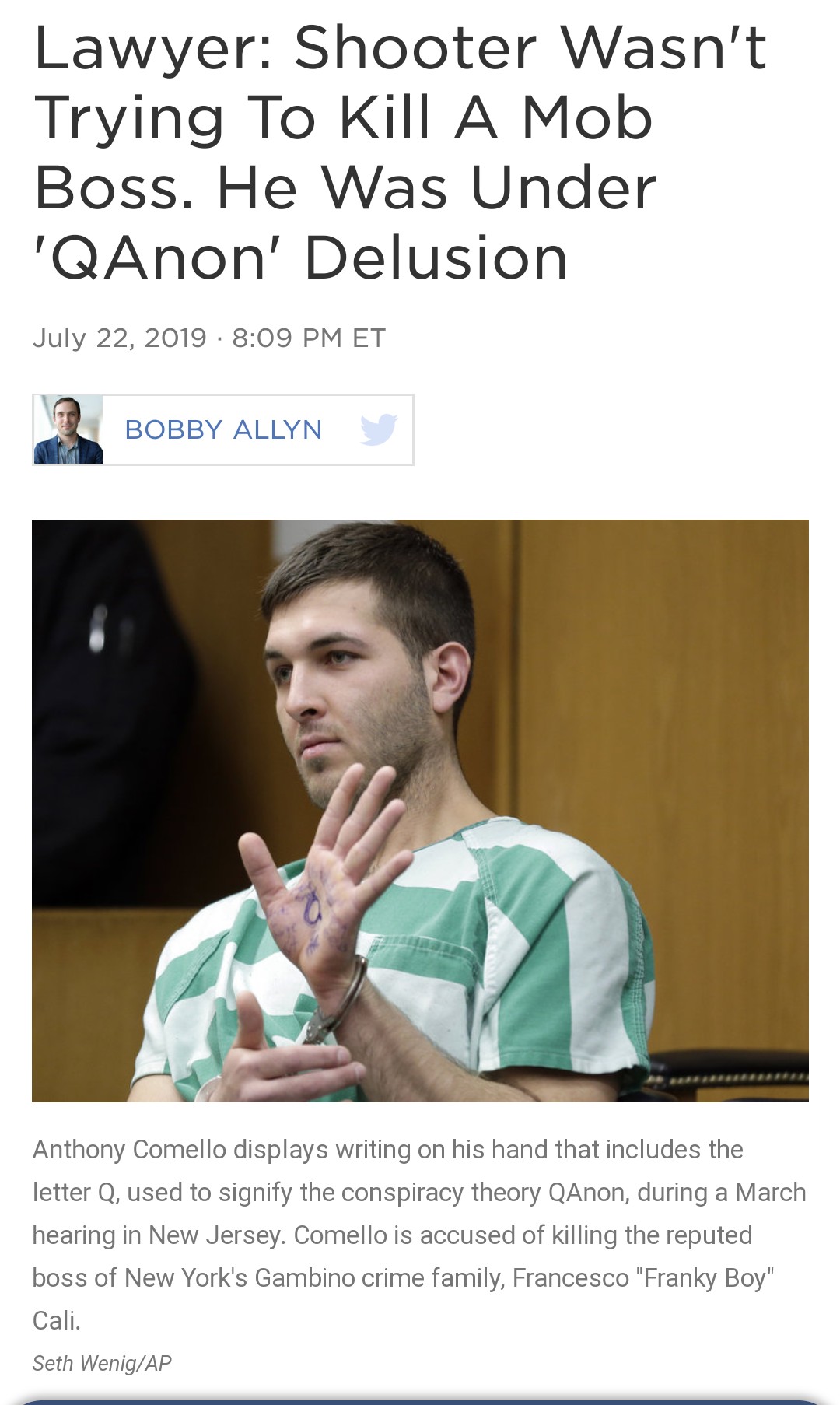 I see a very painful future ahead for him.

I see a very painful future ahead for him.

For all the Q types. Undiagnosed mental issues are a terrible burden

18 knives? Probably got them all from Smoky Mountain Knifeworks for about $100.

But this one's different. She posted her crazy shit on Facebook.

Was she a big deal there?

Bless her heart but still no pics?