A lawyer today accused Oxfam of suggesting reporting rape is ‘contemptible’ after a training document said ‘privileged white women’ were supporting the ‘root causes of sexual violence’ for wanting offenders jailed because it disproportionately affects minorities.

The charity, which has been hit by a slew of sex scandals including claims that employees used teenage prostitutes in Haiti, compiled the PowerPoint presentation through its LGBT network after the group complained to bosses that the debate about women’s rights was part of a ‘patriarchal and white supremacist narrative’.

Accompanied by a cartoon of a crying white woman, the PowerPoint claims that mainstream feminism supports ‘the root causes of sexual violence’ by painting white women as ‘victims’ and that this in turn justifies excessive punishment for ‘black and other marginalised people’.

‘The message seems to be that a woman who reports a rape or sexual assault to the police and presses charges is a contemptible ‘‘white feminist’’,’ she told The Telegraph.

She added: ‘I think any woman could make an arguable case that this has created or contributed to ‘‘an intimidating, hostile, degrading, humiliating or offensive environment’’, which is how the Equality Act defines harassment.’

Next to the cartoon of a sobbing white woman is a caption saying that this attitude ‘legitimises criminal punishment, harming black and other marginalised people’.

The PowerPoint recommends staff read Me Not You: The Trouble with Mainstream Feminism, a book by Alison Phipps, a professor of gender studies at Sussex University.

It then links to the academic’s Twitter account, including a thread which summarises the main themes of the book, including: ‘White feminist tears deploy white woundedness, and the sympathy it generates, to hide the harms we perpetuate through white supremacy.’

Summarising the theme of her book, Professor Phipps states: ‘Mainstream feminism is supporting, not undoing, the root causes of sexual violence.’

Oxfam has insisted the training was voluntary, and included links to ‘suggested reading to help in understanding the issues’ that did not reflect Oxfam’s views or policy.

Meanwhile, Frank Furedi, emeritus professor of sociology at Kent University, suggested that the book carried the message that the ‘colour of your skin symbolises original sin’.

The training, called Learning About Trans Rights and Inclusion, was drawn up in 2020.

It was compiled after the charity’s LGBT+ network wrote to management demanding that they publicly support trans people and claimed that debate about rights was part of a ‘patriarchal and white supremacist narrative’ used by the far right.

Alison Phipps told MailOnline today: 'I can’t comment on the Oxfam training materials as I haven’t seen them, but my book is grounded in a long tradition of feminist thought and politics that sees criminal punishment as part of the problem and not the solution.

‘I would never tell a survivor of sexual violence what to do, but I would like us to have better choices than criminal punishment, media exposure, or silence.’

Oxfam said: 'Oxfam works to tackle discrimination and inequality whether that is on the basis of race, sex, gender identity or sexuality. Our commitment to gender equality includes trans people.

'We believe everyone has the right to freedom of gender identity and expression and will do everything we can to ensure those rights are respected and upheld within our organisation and through our work.

‘Oxfam treats all allegations of sexual exploitation and abuse extremely seriously and actively encourage people to report wherever they have a concern. How to report is covered thoroughly in our staff training provision.’

In April it emerged that Oxfam was under investigation over new allegations of sexual exploitation just weeks after it was cleared to apply for government aid funds again following the Haiti scandal.

The charity suspended two aid workers last week and has commissioned an independent investigation into accusations against senior managers in the Democratic Republic of Congo (DRC), The Times reported.

But whistleblowers said they had raised concerns about the alleged misconduct as far back as 2015.

Oxfam has been operating in the DRC since 1961. The charity employs 273 staff whose work concentrates mainly water and sanitation projects among vulnerable communities.

The latest allegations were written in a ten-page letter sent to the charity’s leaders in Oxford in February.

The letter made various allegations about 11 individuals and was signed by 20 former and current Oxfam staff.

It said: ‘We hope that the DRC does not become another example of Oxfam’s failure to prevent power abuses following the Haiti media exposé in 2018 and Oxfam’s explicit commitment to do better.’

In February Oxfam was released from strict supervision by the charity watchdog following ‘significant’ reforms after the Haiti aid workers sex abuse scandal.

In 2018 it emerged that some Oxfam workers had engaged in ‘sex parties’ with prostitutes after the 2010 Haiti earthquake disaster.

Four employees were fired for ‘gross misconduct’ and three others, including the charity director in Haiti Roland Van Hauwermeiren, left the charity.

Maybe if black men didn’t attempt to rape white women disproportionately they wouldn’t have to want them jailed. Do these white liberals have no bounds to the lengths they will go to satisfy their white guilt?

You racist nazi scum, how can you even spread these lies- 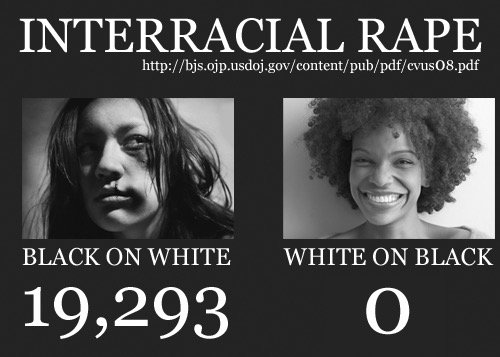 According to Oxfam, you are employing white woundedness to get sympathy.

The real problem was that white women reported the black men for rape.

This is what happens when the leftist thought process is allowed to carry on down its natural path.

Stopped reading at ‘legitimizes criminal punishment’. I cant even begin to relate to a mind that thinks punishing criminals is a bad idea.

This was Kobe Bryant’s defense

suggested that the book carried the message that the ‘colour of your skin symbolises original sin’.

At least some people are starting to understand what is going on.

White feminism and the racial capitalist protection racket: from #MeToo to Me, Not You

On May 25th 2020, Minnesota police officer Derek Chauvin murdered George Floyd, an act that precipitated a powerful wave of Black Lives Matter protests across the world. May 25th 2020 was also the day Amy Cooper (a white woman) called the police on birdwatcher Christian Cooper (a Black man, no relation) because he asked her to leash her dog in Central Park. Her use of the phrase ‘there’s an African-American man threatening my life’ was a threat to get Christian Cooper killed by a cop.

These incidents are linked by more than just a moment in time. White women are deeply, and often deliberately, complicit with white supremacist violence, and our complicity usually takes the form of victimhood that appeals to the punitive power of the state. And although her allegation against Christian Cooper was false, Amy Cooper has something in common with mainstream feminist movements that coalesce around genuine victimisation and trauma, such as the recent viral iteration of #MeToo. The focus of these movements tends to be naming and shaming perpetrators and calling for institutional discipline or criminal punishment to get these ‘bad men.’ 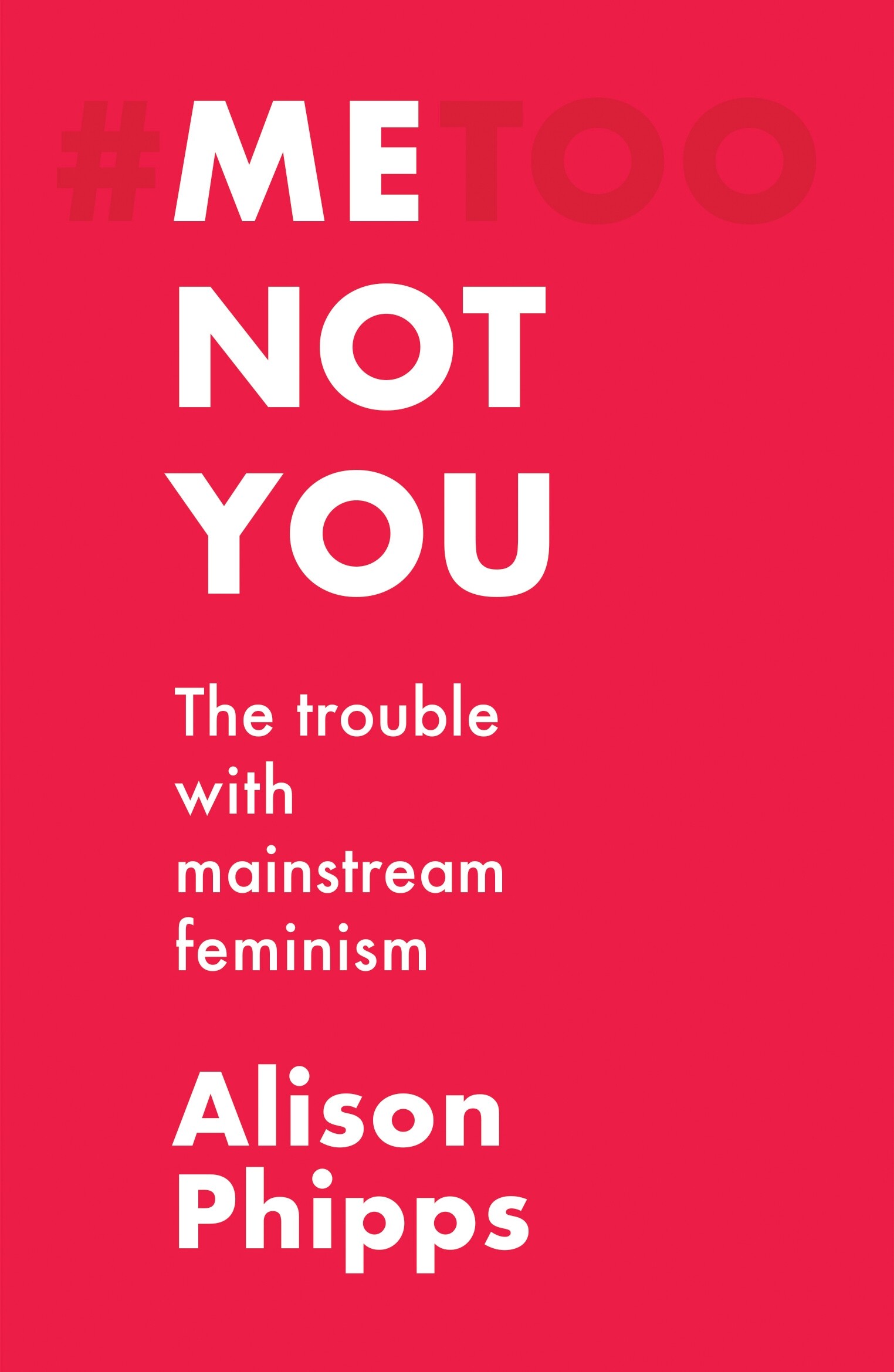 My book Me, Not You describes the political dynamics of mainstream white feminism in the core Anglosphere and parts of Europe. It makes a difficult and uncomfortable argument: that this movement, exemplified by #MeToo, not only centres bourgeois white women but also treats other groups as disposable. This is not just about inclusion and representation, but about the ideologies and attachments that undergird our politics; it is not primarily about individuals, but about the systems and structures that shape our world.

In March 2021, marketing executive Sarah Everard was allegedly murdered by a serving Metropolitan Police officer after disappearing from London’s Clapham Common. The previous June, members of the same police force were suspended for taking selfies with the bodies of murdered sisters Nicole Smallman and Bibaa Henry in a different London park. A vigil for these three women, and almost 200 others who have died in police custody or prison in England and Wales, was subsequently led by feminist group Sisters Uncut and violently broken up by police. Yet mainstream demands following Everard’s murder promised more power to the carceral system – calls for the criminalisation of street harassment and for misogyny to become a hate crime.

The demands themselves were unsurprising, but that such carceral feminism persists even after a white woman has allegedly been murdered by a cop shows how deeply mainstream feminism is mired in white supremacy. We are happy to say ‘Black Lives Matter’, but we do not put our own interests on the line and act with an understanding of exactly what police and prisons are for. Abolitionist thinking tells us that carceral systems preserve state and elite interests, protect private property and resources, dispose of economically surplus populations, and ultimately ensure that racial capitalism functions unabated. While we say, ‘Black Lives Matter’, we legitimate the very systems that demand, and deliver, Black demise.

White women’s experiences of sexual violence enter a world in which ‘protecting white womanhood’ is really about protecting racial capitalism and white supremacy. Because of this, we claim protection that has always been predicated on Black death and the deaths of other marginalised people. Furthermore, although bourgeois white women are not usually subject to state violence, the same white men who purport to protect us from the Others do reserve the right to abuse and kill us themselves.

This is true of Sarah Everard’s alleged murderer, and countless other law enforcement officers worldwide who have harmed girls and women. It is also true of the far-right politicians who profess concern for ‘women’s safety’ in their campaigns against immigrants and trans people, while harassing and assaulting the women they know. This is the patriarchal protection racket writ large – the threat of stranger rape that makes women seek safety with our male partners and family members, who are actually more likely to abuse us. At systemic levels, this protection racket mainly targets class-privileged white women. And it is fundamental to the preservation of racial capitalism.

Acts and threats of sexual violence impose bourgeois binary gender and facilitate the free and low-cost social reproduction capitalism depends on. Sexual violence keeps women in our place, and punishes anyone who does not conform to dominant gender and sexual norms. Acts and threats of sexual violence also support historical and ongoing colonial systems in which commercial and caring labour is extracted from Black and other racialised communities for little or no reward. Rape is a practice of terror used to subjugate colonised, displaced and dispossessed populations in war, occupation, settlement, enslavement and theft (including their neo-colonial forms).

At the same time, the pretext of ‘protecting (white) women’ constructs communities, cultures and nations as violent to justify colonisation, border regimes and military-industrial projects, and to dispose of unwanted populations. Black feminist historians have exposed the widespread brutalisation and killing of Black, enslaved and other racialised and colonised men in response to allegations made by or on behalf of white women. The spectre of sexual danger is still deployed to vilify, abuse and kill Black men and other men of colour, and to construct queer and trans people as threats and make it impossible for us to survive. It facilitates the demonisation and deportation of migrants, the invasion of countries, and the ‘putting away’ of racialised and classed groups deemed surplus to capitalist requirements.

In all these ways, sexual violence is a pivot for the intersecting systems of heteropatriarchy, racial capitalism and colonialism. The acts and threats that keep us afraid, that make us docile subjects of capitalism, also drive us into the arms of the carceral-colonial state and enable many other kinds of violence in the service of capitalist accumulation. By pulling the levers of carceral systems, white feminism is a willing participant in this racial capitalist protection racket. In the process, it trades freedom for the illusion of safety and treats more marginalised groups as disposable. This is how #MeToo often ends up becoming Me, Not You .