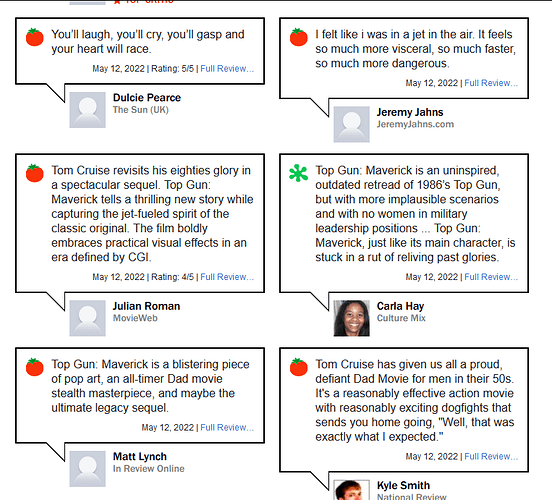 I’m going to see this twice now, just for xir. Out of 77 reviews, 3 are rotten with one being barely and only in relation to the glowing praise it is getting from the vast majority who have seen it so far and the other two complain about it’s “Substance”. “Your 80’s schlock remake fighter jet movie doesn’t have Trans POC Elfkin! BIGOTS! BOYCOTT!”

These people are rabid parasites. Looks like it will be a blast to see in the expensive theatre experience.

Sounds like its not as homoerotic as the first one

But that’s good news based on those reviews. Sounds like it’s similar enough to the original and doesn’t pander with woke bullshit either. That’s a recipe for success.

I fucking hate this era of film review. Some critics only review movies based purely on it checking off progressive ideological ideals. It’s so ridiculous. Imagine Ebert being upset because there wasn’t enough black representation in Seven Samurai or Schindler’s List. Or there weren’t enough women in Apocalypse Now. These type of people are insufferable.

Made this very point in one of the threads about “The Batman”. There are “critics” out there who get paid to watch movies and write reviews of them who are focused solely on this sort of shit and rate movies accordingly.

Do those reviewers have much of a following? I think after reading reviews for awhile most people narrow down the list of critics who’s opinions they respect and disregard the overly negative or have an allegiance to a franchise or studio. Mark Kermode is very good and won’t hesitate to trash a movie if he thinks it’s dogshit

Ackshually… you and @CasketCaseZombie are missing something important while the faggot critics do have a good point.

Why do we watch movies? What’s the difference between a good movie and a bad one?

Surely you agree that it’s not about one criterium but several.
Now our culture had been slowly stolen from us. This is why most normies absolutely fail to even try to breach this rather basic question.

Duh, a movie is entertainment. It should be good, like, people want to have fun going to the cinema!

Which is why the faggots won and you don’t see the forest for the trees.
Apart from its immediacy (effects like suspense), Art propagates values.
If our entertainment has become just a mindless but amusing checklist of shocks and twists, it’s no wonder that powerful groups can easily influence culture.
Should a movie propagate things we all agree to be good, like honour, courage, archetypical gender roles, strength and so on? If not, then there’s your vacuum, waiting to be filled. Because a complex work of art like a movie or a story can’t not propagate values.

The faggots use their power for example to insert their values: the neverending plight of refugees, equity, lgbt, racism, feminism, drugs, antinatalism and more.
They are sincere in their pervertedness and they have an astroturfed following + big bank money behind them. “Progressivism” is important to them, more important then a big twist or well choreographed action scene.

Not suffering from any delusions about WHY they do it, actually elaborated a bit on that in the other post I made about it, just hate that they do it, motives be damned.

The action/adventure aspect was formulaic but decent enough. The script though - holy fuck was this unfunny. Brad Pitt’s character was the only redeeming thing in the film was quickly killed off. Channing Tatum’s delivery is solid but he just didn’t have anything half to work with. Sandra Bullock’s character could’ve been played by anyone and the most unlikable person in the film wasn’t even an antagonist.

Comedic films have gotten so bad. Even decently reviewed movies like the Lost City are just completely unfunny. Even PG-13 movies can be hilarious. There were a bunch in the 90s.

What was the last great comedy though?

I’d say The Nice Guys. I can’t think of another good comedy from that decade. Tropic Thunder or Step Brothers preceeded that by about 8 years. How the hell have we had one really good comedy in almost 15 years? We never realized how good we had it from the late 70s to late 00s.

A few creepy moments, but overall very boring. The main actress isn’t attractive, and the character is likable.
Not worth watching, imo.

The kings man 5/10. Felt like it droned on and on… just finished it and wish i hadnt started it tbh.

Dr strange and the multiverse of madness 6.5/10. Was okay but meh. First latina/latino super hero in the mcu and the powers were being an illegal immigrant and thief. I wanted this to be a lot darker since raimi was at the helm, but it wasn’t. Couple cool things were added but stunted for the plot to continue on… a matrix reference and the smartest man in marvel making a dumb move for the mcu? Shocked i tell you.

Everything everywhere all at once 8/10
I went on the recommendation from this thread. I asked what it was about and they said hard to describe
It was a great movie, a touch long for me but really well done. 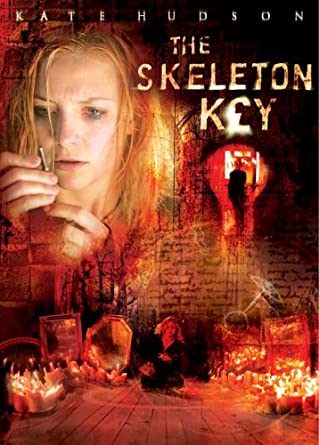 doc about wildlife during the pandemic.

attenborough is like the mr. rogers of the nature doc world; well loved and can do no wrong. the film crew has it down to an art.

It was good, wasn’t amazing and it wasn’t bad. Things could of been better but overall interesting movie wish it would of been longer and a deeper plot. Jared Leto did an amazing job pulling off this character compared to the DC sides Joker.

He has one called Prehistoric Planet coming to Apple TV. Produced by Favreau. Like Walking with Dinosaurs using modern CGI. Looks good!

Everything everywhere all at once was much better for the multiverse than dr strange was tbh. The husband made me laugh pretty hard.