Rather 1 punch ko or 5 round beating?

Thinking about GSP's last few opponents and the talk of him not finishing them.

I think that GSP has been providing us with some very good fights in that we get to watch a five round clinic (in different aspects of mma) with some of the toughest-to-finish opponents in the division, if not the UFC.

Kos, Penn, Alves, Fitch. All of them were beat to crap in their fights against GSP, probably the worst prolonged beatings that they've ever taken.

What do you think? Would you want to get hit in a broken orbital for 5 rounds, or get ko'd?

The 5 round beating leaves no doubt. Kos will never be able to say he caught me with a lucky punch or if i did this or that. He can only say he took a one sided beating and survived for 5 rounds. After all the shit talking he did, he can only say he wasn't finished. 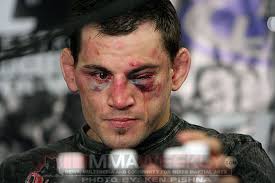 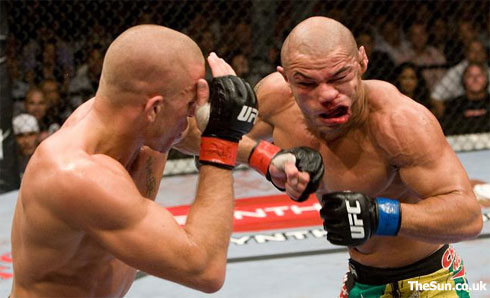 Pretty tough guys up there ^

great pics and yes, I agree, any one can get caught, but to be dominated for 25 minutes? c'mon, you can't say much after that...

Now a prolonged beating, capped off by a last second KO would probably be the worst.

Only positive side of the five round beating is that you get to say you have a good chin. I hope people never talk about me saying that I have a tough chin. You've got to be hit hard and often for people to say that.
epwar December 21, 2010, 2:46pm #8

Perfect situation would be a 1 punch KO that leaves the guy unconscious for 25 minutes.

epwar - Perfect situation would be a 1 punch KO that leaves the guy unconscious for 25 minutes.

I guess a combination of both is the worst, but I think the 5 round domination is the worst of the two.

I agree with the majority here. Five round beat down is something few come back from with a skip in there step, hell it can steal some fighters souls, remember the crow? He never flew again after Franklin put the algebra on him for 25 minutes

Anyone can get clipped by a punch or get caught in a submission.

Getting raped for 3-5 straight rounds leaves no doubt that you are completely outclassed.

I'd take the one punch KO every single time.

Edokaz248 - when u watch a GSP fight u know ur going to be watching it for 25 mins so i rather watch someone who can pull a ko possibly after round 3.

dont like to see a fighter not be able to finish a one eyed fighter with 4 rounds remaining. its depressing

The point is that GSP's opponents are notoriously difficult to finish, but he certainly beats the crap out of them.

on the flip side of that, would you rather watch a 30 sec main event fight or a 25 minute main event??

Remember the days of waiting for a huge boxing PPV only to have it end early (sometimes in controversy) in the first few minutes....

Personally I enjoyed watching the 5 round fight....