Paul "Bear" Vasquez grew up in East Los Angeles, worked as a firefighter, and in 1985, moved to Mari­posa, Cal­i­fornia, just outside of Yosemite State Park. In time, he bought an eight-acre plot, reportedly grew cannabis, married, had a son and a daughter, divorced, and became a truck driver.

He put on weight working as a truck driver and did combat sports training as a form of weight loss. As an incentive, in 2005 he took an MMA fight, taking “Hungry Bear” as his ring name.

The fight didn’t go his way, and an image from it was subject to good-natured romoshopping. If you were into MMA then, you saw the pic. 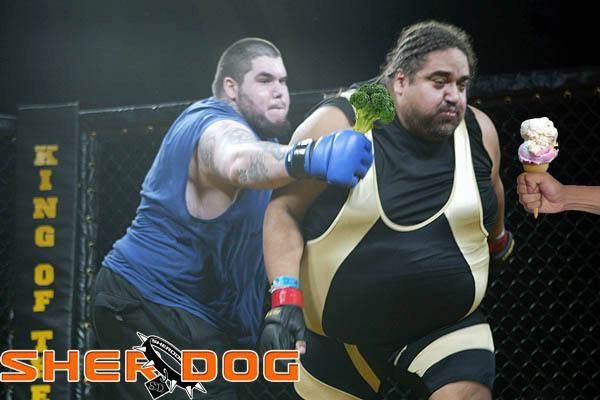 But that recognition was as nothing compared to what happened when in 2010 Vasquez posted a video of a double rainbow, with his voice, in awe, narrating what he saw and felt as he walked around his yard.

Vasquez appeared on Jimmy Kimmel Live!, Tosh.0, hung out with Snoop Dogg, and appeared in ads for Delta Air Lines, Voda­fone New Zealand, Microsoft, and Smart­wa­ter with Jen­nifer Anis­ton, and his double rainbow video opens the 2013 movie We're the Millers. The burly Paul Vasquez had become a folk hero.

On May 3, Vasquez, now going by Yosemite Bear, posted on his social network that he had suffered symptoms of a heart attack.
"Whatever happens I'm ready for it, I'm happy to experience it all, it might only be pollen and I'll have more time in my apartment, if it's the virus and it's my time to recycle I look forward to coming back to a new body and starting over, whatever happens I'm enjoying the ride," he wrote.
On May 5, he posted that he was getting tested for COVID-19.
"I’ll get my results in two days, however at this point I’m fairly certain that I don’t have it," he wrote. "I didn’t have a fever. Something else is going on with me. I’ll update later on."
On May 6, he re-posted a video of a singular rainbowtaken four years ago in his front yard, where the double rainbow video was also filmed. It was captioned "I miss my front yard."
Paul L. Vasquez died early Saturday, May 9, at the John C. Fremont Hospital emergency room in his hometown of Mariposa. The cause of death has not been released, but is reported to have been a heart attack.
Rest in Peace Paul L Vasquez. When I see a double rainbow, I’ll think of you, every time man.
KaiTangata May 11, 2020, 10:15am #2

Never knew they were the same guy. Sad. Covid is no joke.

People want lockdowns to end until something like this happens to a loved one of their own. Very sad and scary times.

Hope for the best prepare for the worst

Nooooo. Loved the double rainbow vid. I got so many damn laughs outta that vid back in the day

I heard on the radio this morning that it had nothing to do with Covid and that they found something else wrong with him.

I have jokes but it's too soon imo.

R.I.P. Double Rainbow guy...I hope you find out what it means.

People want lockdowns to end until something like this happens to a loved one of their own. Very sad and scary times.

Hope for the best prepare for the worst

I don't think he had Coronavirus.

It sounds like he tested negative, but was sick with something else. The article above says possibly a heart attack.

I think both or one of the we're UGers too . If I'm not mistaken

May he forever be at the end of rainbows

Sorry for your loss Kirik.

Ever since I showed her the Double Rainbow video a few years ago, my gf and I often send texts to each other with two little rainbow emojis or say "Have a Double Rainbow day." It was easy to laugh at that guy back when I first saw the video, but I realized it was just one of the nicest expressions of joy I'd ever heard.

RIP and thanks, Paul.