In December not only did we see the birth of ARES Fighting Championship, but we also witnessed the explosion of undefeated Senegalese wrestling champion Oumar 'Reug Reug' Kane (1-0) into the MMA word.

His devastating TKO win over the more experienced Sofiane Boukichou in the co-main event of ARES 1 became a viral sensation that saw Reug Reug dominate headlines around the world. Drawing from his Senegalese wrestling base, the 27-year-old landed a number of slams on Boukichou en route to a completely one-sided victory in the second round. 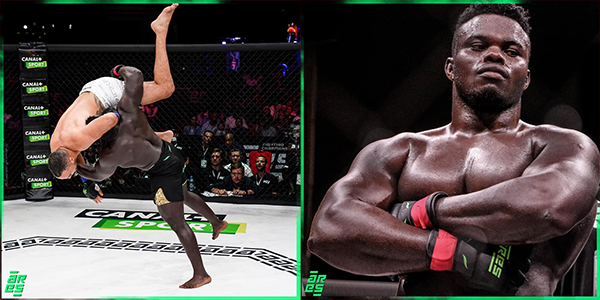 Now ARES 2 on April 3 at the Forest National-Vorst Nationaal arena in Brussels, Belgium, will see the return of Reug Reug as he faces undefeated Russian heavyweight Ivan Romanov (5-0). Making his pro MMA debut in 2017, Romanov is an experienced grappler and saw a breakout 2019 where he registered three wins on the Russian MMA scene including scoring a submission victory over 18-fight veteran Ilya Gunenko.

This contest joins the already announced clashes between France's Nordine Taleb (15-7) and Belgium's very own Maarten Wouters (11-7) in the main event and a co-main event between USA's John Moraga (19-7) and Mexico's Hector Sandoval (15-4). Also recently added to ARES 2 is a heavyweight contest between UFC veteran Luis Henrique (12-6) and RIZIN veteran Teodoras Aukstuolis (11-5).

Tickets are on sale Wednesday, February 12 at the Forest National website.