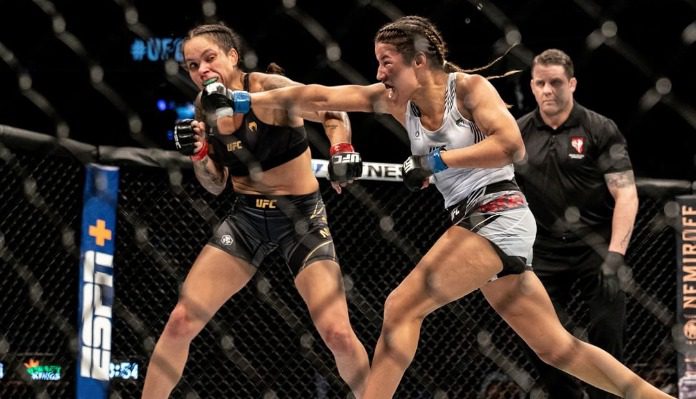 Last Saturday night at UFC 269, Julianna Pena shocked the world by submitting Amanda Nunes to become the new UFC women’s bantamweight champion. It was the kind of achievement many thought was near-enough impossible but through sheer will, determination and ability, Pena proved the masses wrong with a gutsy win over the woman many consider to be the GOAT.

Joe Rogan, who was commentating at cageside in Las Vegas, was particularly critical of what he saw from Amanda Nunes when breaking down the fight with Marlon “Chito” Vera.

“She was like trying to take her out quick and then when Julianna was still there, you could tell she was f***** tired. For you to be a world champ in two divisions and universally recognized as the greatest women fighter of all time – which Amanda Nunes is – it’s [inexcusable] to be that tired in the second round. Just standing in front of her. Just swinging in front of her no movement side-to-side. Standing right in front of her like you’re watching a regional fight.”

It appeared as if the gas tank of Nunes seemed to disappear pretty quickly in the second round but a lot of credit needs to go to Julianna Pena. Instead of going straight for the takedown, she decided to “bully the bully” and really go after “The Lioness” with precise jabs and a strong chin.

Now, we all have to sit back and wait to see whether an immediate rematch is on the cards.

I always appreciate that he gives the link to the original article, but then also posts the relative information below as well. Thank you, Phooey.

Are they all noobs?

Amanda got hit in the head, several times. Goat or not it obviously amd logically messed her up.

Are they all noobs?

Amanda got hit in the head, several times. Goat or not it obviously amd logically messed her up.

Joe Rogan NEVER gets tired when the bag kicks him back.

I think he knows what he’s talking about here.

I think he knows what he’s talking about here.

“Standing right in front of her like you’re watching a regional fight”.