Who you all got, this is a really good boxing match. Both ranked in the top 10. 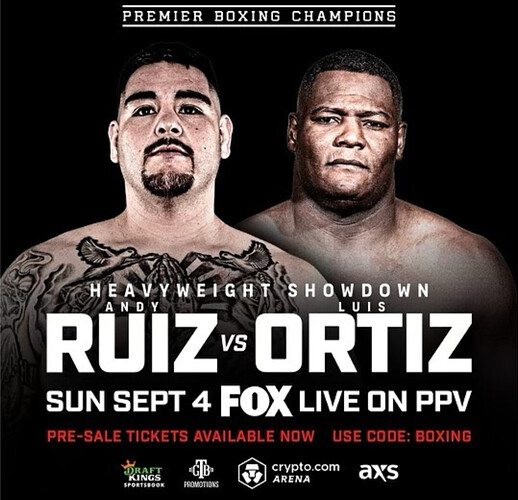 4 years ago this would have been must watch.
Just how old is ortiz at this point?

Yeah, I will watch it, but I cannot imagine actually paying for that on PPV. Neither guy is PPV worthy by themselves, and there’s no world title on the line. I just don’t see how they can think PPV is a good idea for this fight. This is gonna sell less than a ufc headlined by Mighty Mouse.

Who the hell is paying for this?

Ortiz has to be late 40s in reality.

I saw a video of him working out, and he looked to be in good shape, but you know how that goes.

This would make a good co main on another card. As a main event for ppv they can suck my dick.

Ortiz was beating Wilder in their first fight handily til Wilder got him in later.

Pretty good fight. I think the pre-Wilder version of Ortiz would win this, but I could see Ruizs youth (and in turn his ability to take punishment and keep up the pace) allowing him to take over as the fight goes on.