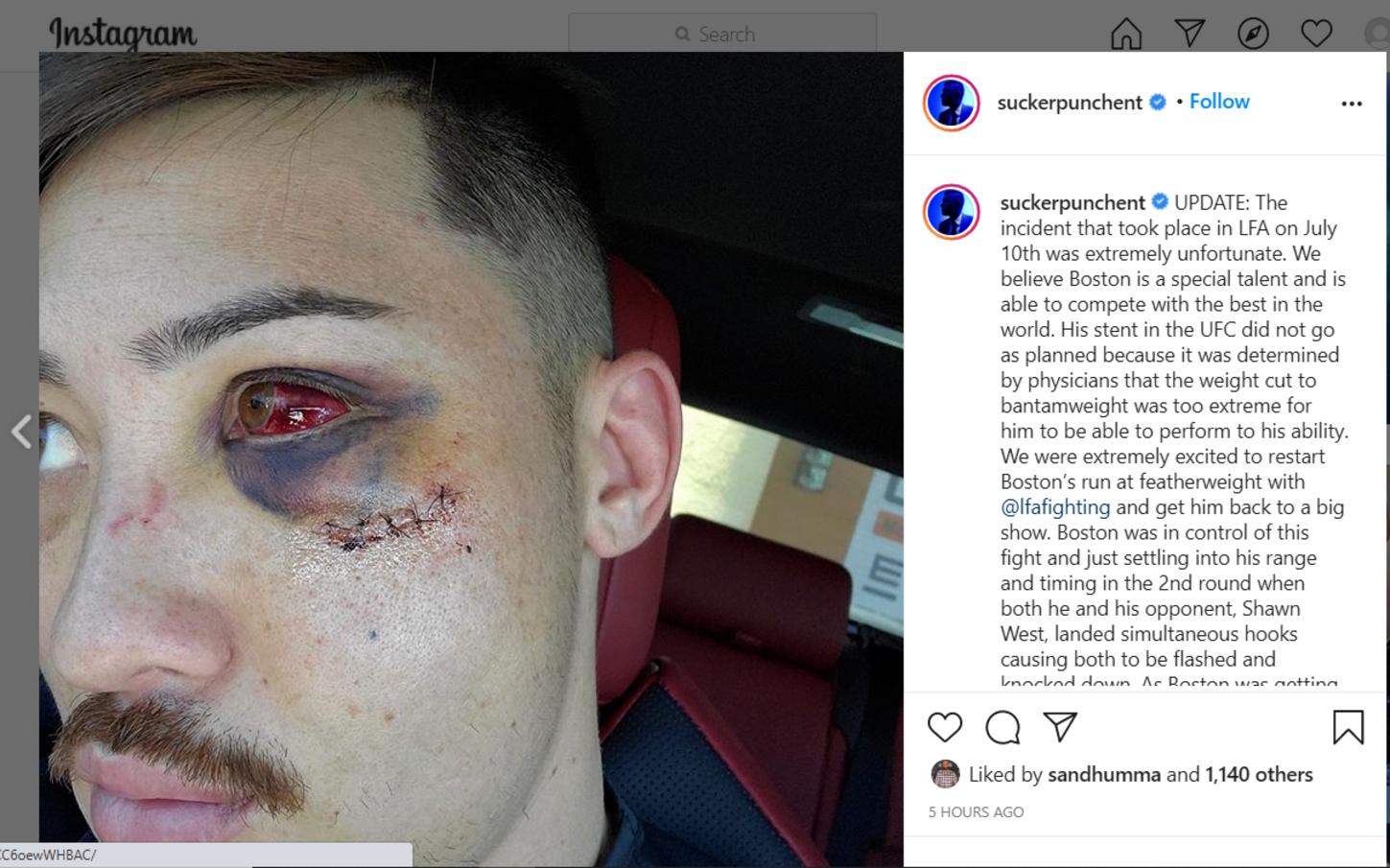 For those who missed the original incident:

Damn that was dirty af

Did he get DQ’ed or was it legal? The announcers obviously had no idea what was going on but they said that it was not a foul and it was a huge win for the guy.

Crazy how that is either a disgusting foul or a highlight finish depending on rule set.

Under unified rules, it's dirty as fuck. The guy was aiming the knee the entire time.

Manager Brian Butler-Au
"UPDATE: The incident that took place in LFA on July 10th was extremely unfortunate. We believe Boston is a special talent and is able to compete with the best in the world. His stent in the UFC did not go as planned because it was determined by physicians that the weight cut to bantamweight was too extreme for him to be able to perform to his ability. We were extremely excited to restart Boston’s run at featherweight with @lfafighting and get him back to a big show. Boston was in control of this fight and just settling into his range and timing in the 2nd round when both he and his opponent, Shawn West, landed simultaneous hooks causing both to be flashed and knocked down. As Boston was getting back to his feet he was hit with an illegal knee that ended the night. What we have to focus on here first and foremost is Boston‘s health. The knee landed with incredible force and caused Boston to suffer a broken orbital and cheek bone. Aside from the DQ we feel there should be disciplinary actions enforced by the commission to set a higher precedence on these types of fouls. There was no question about the legality of the knee and Boston was awarded the win at the end of the contest. It goes without saying that this is not the way Boston wanted the fight to be determined. As a team we are sitting down with Boston and his family to discuss what we want to do moving forward. Boston would like to thank LFA and their staff for getting him back on stage and giving him the opportunity to perform. For now Boston is going to undergo further examination and we will determine the next steps as we go."

That's how you'll end up seeing the first death in the UFC. Someone will kill someone doing that.

His opponent could have just as easily finished the fight with some well-placed punches.

Will he ever be able to see out of that eye again? That’s horrible

What a fucking scumbag move, he easily couldve ended the fight with a punch but instead pulls that shit?!?

That's how you'll end up seeing the first death in the UFC. Someone will kill someone doing that.

I agree...... At least in pride the head wasn't held in place by the fence and could go out the ropes.

Got to be a lawsuit coming

I’ll see myself out

Damn that was dirty af

I was expecting a nasty deliberate eye gouge or something. To me it was clearly a foul if under the unified MMA rule, but it wasn't "dirty af". He rushed in to hit him and did so only once. Foul, yes. But understandable in the heat of the moment. It happened so fast.

Nothin awesome about that, that's pathetic that u need to do somethin so dirty when the guy was pretty much out

Nothin awesome about that, that's pathetic that u need to do somethin so dirty when the guy was pretty much out

Damn. That sucks, I hope the guy recovers well.

...But to everyone saying dirty af, that isn't even a foul in One FC and it was barely illegal under the unified ruleset they were competing under. Yeah it was a foul but the guy was on rubber legs and trying to seal the deal on an opponent he knew he had just hurt. It was a foul, over the line, all that, but it wasn't like.. egregious.