Brazilian reporter asks Dana at the press conference about whether the reports in Sao Paulo newspapers that Anderson Silva will fight Sonnen in Sao Paulo is true or not. Dana asked her how she got this info and kind of confirmed it. I can't believe it, Sonnen might not make it off the airplane the Brazilians hate him.

he said no bit it would be cool

the way he said no, let's get somebody to post that clip.. He asked how they got that info, and that his promotions people would be pissed because it had gotten out before they had a chance to announce it. 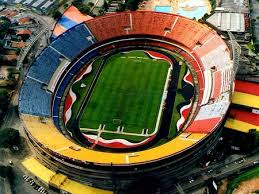 Why not? The champion deserves home field advantage over a challenger.

yeh luca i agree the way he said "how do you guys find out about these kind of things!?" then "yeh that would be awesome fight in sao paulo in january" I think its a go!

it was in June though. so maybe a tuf?