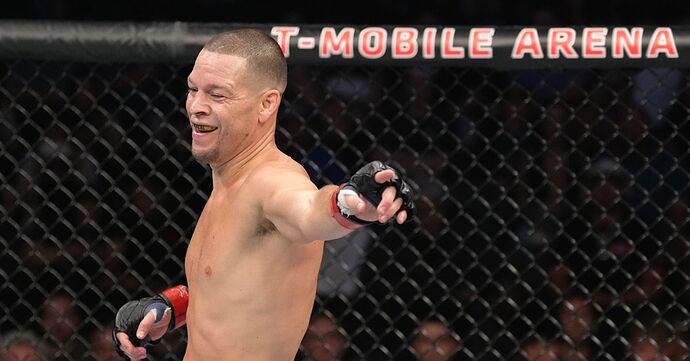 ONE Championship is, of course, interested in high-profile free agents despite being “very, very selective” about who gets a contract. When CEO Chatri Sityodtong looks at past acquisitions (Eddie Alvarez) and present possibilities (Nate Diaz), maximizing value is his biggest concern.

Alvarez parted ways with ONE Championship because, among other things, he wanted to finish his career in the U.S. If Diaz wanted to join the Asia-based promotion’s ranks, Sityodtong told The MMA Hour, there would have to be a deal that put him to full use.

“What makes Nate interesting, obviously, is that he wants to do multiple sports, and so that is definitely the platform of ONE,” Sityodtong said. “When you look at [recent ONE acquisition] Roberto [Soldic], he says he wants to win multiple world titles in all the major disciplines, and he wants to be the greatest combat sports athlete ever.

“You have guys like Alistair Overeem who’ve been like a K-1 superstar … so I think having all in one platform, that’s kind of Roberto’s thing.

“So when I look at Nate, there’s a possibility of that is well, like in boxing and grappling, he wants to do that. So yeah, we’d be interested, but it’s not our typical path.”

Alvarez previously told The MMA Hour that his departure from ONE was pushed ahead by the pandemic, which stalled the promotion’s plans to venture stateside. Sityodtong indicated it was simply a business arrangement that had run its course.

“I have nothing but love and respect for Eddie,” he said. “It’s just one of those things, like in every situation, you want to make it win-win, and if both sides are not winning, then what’s the point, right?

“So we had our issues, he had his issues, but nothing personal or nothing upsetting. I think he wants that one more big run in his career, and he’s at that stage, and obviously, he’s a legend, and it just wasn’t happening for us, as well, so I think both sides, we weren’t completely satisfied. But again, no hard feelings, it was amicable. We just got on the phone and talked, and that was it.”
Gambles on international talent haven’t always gone south for ONE. Sityodtong had nothing but good things to say about the promotion’s historic trade with the UFC that netted pound-for-pound great Demetrious Johnson. He also touted Soldic’s choice to sign with the Asia-based promotion despite multiple offers from other parties.

“[For the UFC] to get a retired, injured Ben Askren, who I think was two years out of the game, and he retired, for D.J., who is still in his prime today as he proved a few weeks ago on Amazon on Prime 1,” Sityodtong said. “He’s the GOAT, so to have the GOAT in his prime, it’s amazing.”

Sityodtong hasn’t ruled out a move to the U.S., which could make ONE more attractive to certain free agents. He said the promotion is currently establishing a beachhead for a stateside move in the second quarter of 2023; he spoke at the 2022 CAA World Congress of Sports to tout the promotion’s global expansion interests. A broadcast deal with Amazon Prime has again put events more in reach for domestic MMA fans.

If a star like Diaz wanted to sign, or if the UFC or another big promotion wants to orchestrate another trade, it could only aid ONE’s mission. So far, Sityodtong is playing his cards close to the vest.

“We had Roberto Soldic, who I think is literally the next big thing in combat sports,” he said. “But we’ve been hyper selective, and we will talk [to the UFC about trades], and it just hasn’t come up.”

DJ’s historical standing is going to be extremely interesting. He was a phenomenal fighter who had crazy moments that have never happened before or since, such as a suplex-turned-midair-submission, or ending a fight at 4:59 of the 5th round.

Yet he was such a net negative in terms of marketing and buyrates that the UFC engaged in the only trade in history just to be rid of him. The UFC contemplated eliminating the division because of him. Dana was pretty openly hostile to the guy. Not because he was a terrible person or a bad fighter……just because he’s a tiny little dorky goof who does nothing but fight and watch anime and play video games, and refused to even attempt to drum up any public interest in his bouts.