Wow. My roommate just asked me, in all his stoned splendor, if Stephen Seagal was "still deadly".

We're watching Out For Justice, and I told him that Seagal was fat and washed up and could barely move, much like a modern day Marlon Brando without the acting skills.

He informed me that he heard from several people that Seagal was the highest black belt in the country, and quite possibly the "deadliest" man to ever be captured on film.

I started laughing, and then felt the need to share this with you. 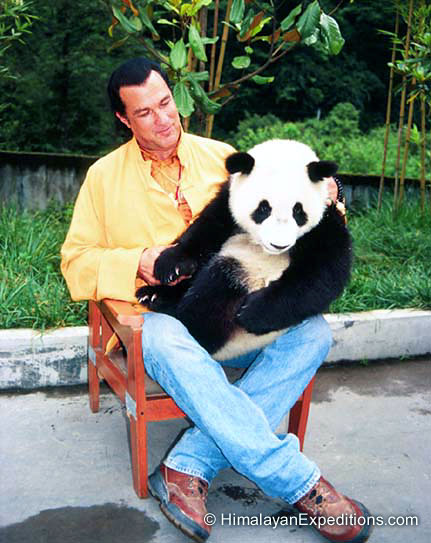 What did acclaimed rapper and community leader DMX have to say about working with Mr. Seagal in the critically acclaimed Exit Wounds?

"Steven Seagal is a fuck. He's a fucking shithead. With spray-on hair. He talked like he was an old slave master. ‘Hey, wassup? We's gonna have us a barbecue.' I was just like, ‘Man, who the fuck do you think you're talking to? My name ain't Sambo, nigga. Get the fuck out of here with that bullshit.'
Or he'd pull some fake attempting to be friendly shit. He'd see my wife and be like, ‘Hey, little mama.' We laughed about it. Just like, ‘This guy's a fucker.' He's a asshole." Where's that quote from? Great stuff.

That quote is from the award-winning hip hop magazine "XXL".

he is only deadly if you're on his casting couch.

Gene Lebelle can tell you how deadly Segal is.I guess choking Segal into loss of bowel function can be deadly to your acting career

well dmx is a peice of shit anyhow... not that segal is the mAN

I actually trained in aikido before switching over to bjj. I trained under Larry Reynosa who is a 5th dan under Seagal. When Seagal came back from Japan in 86 after having spent 11 years training there, his aikido was solid and he was in shape. Last time I saw him was in Colorado at a seminar and he was bulging at the waist line and could barely move on the mat. It was pretty embarrassing! Anyway, the guy is so full of himself it's pathetic. Besides he was married to Kelly Lebrock and cheated on her with her best friend.

Seagal is a huge man, 6'4" 250 pounds of killing machine, ex CIA operative. He worked drug busts in east LA but was fired for eating too many carne asada burritos during a stake out.

Plus he'll take the mob out in like a second flat too.

Are you a racist, MaxPower? Why are you claiming that international superstar and charity worker DMX is a piece of shit?

Dude...Seagal can beat the mob and a still have his hair perfectly slicked back...Let's see Machado do that!

Plus we all know he choked Machado out too.

Yes, Bill Colosimo. Back in 1993, there were 5 people missing in the Sudan. Larry Harris was one, but escaped on a boat to Belize. The fifth equates revolution, which of course you know is the catalyst for change :) Thanks for your help!