Story of guy who's been at 242 - arena description

How I visited the Habib fight in Abu Dhabi: what was not shown on TV

I wrote a short post for Men's Health Russia - about how I visited Abu Dhabi for the fight of Khabib Nurmagomedov and Dustin Porrier. A detailed report and impressions from the main bout of the UFC 242 lightweight tournament are in the MN print number, but for now a little about the situation around the match.

Even in the toilet of the Domodedovo airport, I saw a crowd of young people in Caucasian hats. Gradually, the number of people in white hats grew. On a plane flying to Abu Dhabi, I counted nine more men, their hats sticking out from behind the backs of chairs.

By the way, I met my neighbors: there were guys from Dagestan, Chechnya, Ingushetia. One of them regretted: "I went out of Dagestan for the first time, I didn't look through Moscow properly."

On the plane I fell asleep and then woke up a couple of times from someone's exclamation: "Habib!". Later, I was already accustomed to this combination of letters, as, say, to the singing of birds. Arriving in Abu Dhabi, I also occasionally heard on the street: "Habib, Habib, Habib."

The range of shopping centers in Abu Dhabi has expanded in connection with the upcoming event. There, for example, they sold cell phone cases - of course, with the image of a Dagestan fighter. Dustin, it is obvious, was not popular. The cost of a cover, if translated into our money, was 2500 rubles.

And here are the hats. Take pictures in them for free, but if you want to get them - prepare 10,000 rubles. Judging by the stand, hats quickly sold out. Later, in the parking lot near the arena where the battle was supposed to begin, I met Dagestanis who also sold hats - they spread them on the hood of the car. With these men, the cap was much cheaper, about three thousand rubles.

The organization of space was rather strange. Actually, it was originally planned that the battle will take place in the brand new The Arena in Abu Dhabi, but it does not seem to have been completed. As a result, the very place where the battle took place consisted of several hangars. In one hangar, a recreation area was arranged (you could buy souvenir belts there, as well as beer, soft drinks, and something to eat), and in the other, the event itself was actually taking place.

It was necessary to go to the place of fights along an unfinished road, through potholes and concrete fences. Everything was lit by lanterns of various shapes and sizes, they were obviously brought in haste, right before the event. From time to time, not only girls in Muslim clothes came across the road, but also ladies dressed in evening dresses and high heels - the poor fellows stumbled and almost fell. There were air conditioners on the street sections, but there was no sense in them with +38 C.

The hall was full, Russian speech was heard everywhere. As my colleagues later told me, Chechen fans of Khabib managed to fight with the guards, who supposedly prevented them from watching the fights.

It is interesting that the VIP zone for the most distinguished guests was arranged quite, it seems to me, uncomfortable: at the top of the stands there was a long glazed balcony, behind which the battles were watched by high-ranking guests (with separate air conditioning and delicious snacks). In my opinion, to see something from there was quite difficult.

Everyone knows what happened next: Khabib strangled the American ahead of schedule in the fight for the UFC lightweight champion title (up to 70.3 kg). Nurmagomedov, after the victory and the press conference, first drove to McDonald's - he bought burgers for himself.

I'd love to hear more about those delicious snacks!

road to the arena 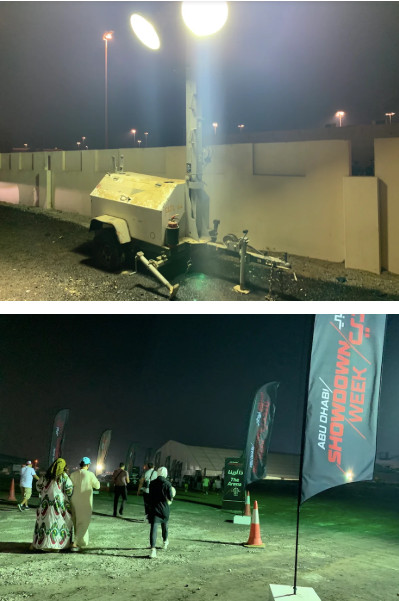 It's so shit there lll

Yas Island was like a lame version of spring break. But yea, you could go to the hotel bars and buy whatever you wanted. Cheapest option was just picking something up in the duty free at the Airport.

sounds about as bad as i thought it would be