Wing Chun is often grouped together with Aikido and projecting Chi Balls, as a martial art with very close to zero practical value. It shouldn’t be.

It is unfortunately a lesser art, with no representative who has been able to beat the world based on the techniques that define it. There are many arts that have carried exponents to the top. Sanda has Weili Zhang, Muay Thai has Anderson Silva, folkstyle wrestling has Jon Jones, Sambo has Fedor Emelianko, Kyokushinkai karate has Georges St-Pierre, freestyle wrestling has Khabib Nurmagomedov, and one can go on and on through a wide variety of arts. For Wing Chun, there is no great champion. But that is not to say that it doesn’t work, and that is not to say there is nothing to learn from it.

Some argue that the best techniques in Wing Chun, like eye pokes and groin kicks, cannot be used in mixed rules competitions, which makes the head-to-head comparisons unfair. That argument is silly.

If you want to know how to gouge an eye, ask a professional boxer - they are the discipline with by far the greatest experience striking the eyes. By contrast, there are zero verified cases of a Wing Chun expert succeeding in this regard. Why would you learn how to strike an eye from a discipline that never actually tried it successfully?

Further, adovcates of the eye poke superiority argument should consider the difficulty of hitting a tiny eye, with tiny fingertips, in a circumstance so adrenalized and mobile that it’s hard to land a jab. Then compare that with the ease of gouging an eye when you have someone mounted and their head pinned. Further, if Wing Chun cannot figure out how to punch and kick in a way that can carry someone to the top, there is no reason to believe that their methods of eye poking and groin kicking are any better.

However, to repeat, the art can be made to work against trained, active resistance. And doubtless, there are aspects of Wing Chun that every martial artist would benefit from knowing.

One of the most highly respected martial arts is Kyokushin karate, and its offshoots like Ashihara, Seido, Kudo, Enshin; they’re all are highly respected and dangerous. In this extremely interesting style vs. style video, a Wing Chun kwoon storms a Kyokushin dojo. As you can see, the techniques and methods that define Wing Chun can be made to work.

Wing Chun techniques are generally “closed”, with the limbs drawn in to protect the central area, and also to maintain balance. This Wing Chun fighter does a very good job executing the techniques of his chosen art.

When the fight starts, the karate black belt moves forward immediately, but doesn’t attack with anything. The Wing Chun expert goes right to work with a flurry of attacks, one of them a straight right hand to the face. The karate fighter does a lot of defending, as the Wing Chun fighter continues to throw attacks from multiple directions.

Eventually, the fight ends up in grappling range and goes to the ground. It doesn’t last long down there, though. They both quickly get back up and start swinging again. This time, it’s the karate fighter on the attack. The Wing Chun fighter creates some distance and then starts throwing back.

A little more moving around, some missed attacks, and then the karate black belt throws a wild strike, misses, and falls to the floor. The Wing Chun fighter jumps right on top of him, and clearly has some training in takedowns and ground control.

Check out the video below to find out how it ends. 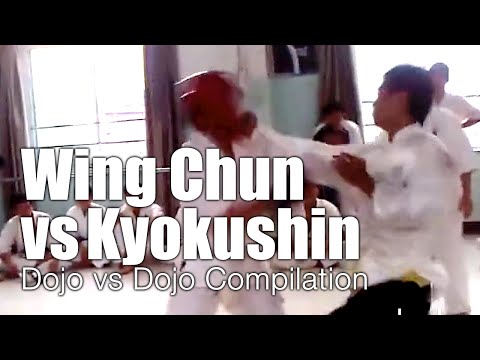 Far too often, martial artists try to establish the superiority of their approach with endless arguments, and with flashy demonstrations on unresisting dummies. By contrast, these two groups put their respective arts to the test, and deserve great respect.

In all, there are five fights, with one filmed from two different angles.

Modern mixed martial arts was born from two visions. Rorion Gracie wanted to prove that Brazilian jiu-jitsu is the best martial art in the world (and that others are worse). In contrast, Art Davie wanted to figure out who the apex predator is.

As it turns out, the latter path includes asking not whether a martial arts is effective or not, whether it is right or wrong, but instead asking how it is right. And there are things that are right about Wing Chun, as you can see.