WWE legend Tammy Sytch allegedly caused a car crash last month in which a 75-year-old man died … and police suspect she was under the influence of booze at the time of the wreck.

The Ormond Beach Police Dept. spelled out the allegations against Sytch in a new traffic crash report, obtained by TMZ Sports, saying the accident happened at around 8:28 PM on March 25 on U.S. Highway 1 in Volusia County.

According to the docs, Sytch was driving a 2012 Mercedes when she crashed into the rear of a 2013 Kia Sorento that had been stopped at a stoplight.

Police in the docs say the front of the Kia then crashed into the rear of a 2011 GMC Yukon that had also been stopped at the stoplight.

Cops say two witnesses said Sytch had been “driving at a high rate of speed” before hitting the Kia.

In the docs, cops say the driver and the passengers in the Yukon complained of neck, back, side and head injuries – but were not transported to the hospital.

Police say in the docs that they believed Sytch was under the influence of alcohol at the time of the crash. They added that a blood sample was taken – though the results of that test are still pending.

In a statement to TMZ Sports, a spokesperson for the Ormond Beach Police Dept. said they are actively investigating the crash – and say toxicology results could ultimately lead to criminal charges against Sytch.

Lock her up and throw the key away this time.

So it happened to weeks ago, and just released names right?

I read further that she has been arrested for DWI 6 times. At this point just put her under the prison.

I am surprised she is still alive.

I bet the puss smells rotten

I read her version of events. Dolph treated her like a human fleshlight.

Not gonna hate on Dolph over that, You know you guys wouldn’t be able to pass up a nostalgia bang

Lol i heard her on some podcast saying basically the same shit. Didnt she claim he was super late and hubgover for one of his mania appearances or some shit becausr they were fuckin and drinking all night?

I read her version of events. Dolph treated her like a human fleshlight.

Talk about taking his imitation of HBK to a whole new level.

She is a garbage human being and always has been. I hope she kills herself.

She needs to go to prison. She has proven several times that she is not capable of safely living in the public. A man fucking died because she has not been locked up for good when she should have.

IIRC correctly Schumer dumped him because she couldn’t keep up with him in the bedroom.

It’s definitely going to be some jail time I don’t see how she could get away with this.

Just saw she was arrested last night and is being charged with felony DUI manslaughter and many other traffic related charges.

So this another dui since the one like a month ago?

Nah… she was apparently on house arrest until the cops and the DA completed their investigation. 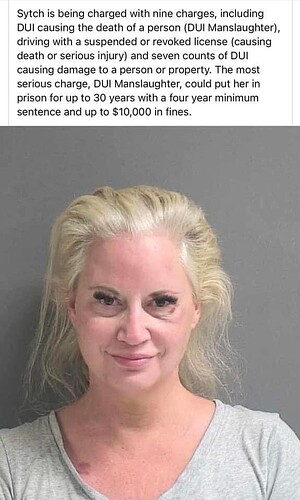 I’m not sure if that pic is from yesterday or after the crash.