Johnny and ravyn, how dumb is Johnny to piss off his “ride or die” by chasing tail, what a dumb shit

Nany looks weirder every year, her face is collapsing. She quits when the challenges get really hard.

Jordan clearly owes someone money to come on the show paired with aneesa. How can anyone take her seriously? She’s bigger every season

This show is my guilty pleasure, I can’t not watch it, lol

Next episode I’m guessing it’s Darrell coming back, he was on the preshow with everyone else they brought back so far

Faysal is a faggot

anyone else think it’s CT they are bringing back next episode??

Would be great, but I believe they’d released the entire cast before the season and he wasn’t included. Johnny and Jordan were.

Johnny and ravyn, how dumb is Johnny to piss off his “ride or die” by chasing tail, what a dumb shit

I’d agree with you if the girl he was able to get wasn’t so effing hot.

True, but he submarined his chance at winning by chasing that tail, all he has to do was put it on the back burner for a few months and get to work

I never would have guessed that’s how you pronounce Faysal.

I knew a Faisal which was “fay-sal”

I think this is akin to Darrel being “dare-ell”.

Dude i laughed every time he would say in his gay/jersey accent “why isnt it working? Why cant i pick her up!?”

You know its bad when the dude on the other team starts giving you pointers.

This week:
Veronica is soooo fat. The paired her with the black guy who is afraid of heights?!? The fair thing would be pairing that floatation device with one of the black guys that can’t swim!

Tommy and Anal-ease are dummies. But she has a cool 1/2 of a name.

Jordan and Tori, SMH. He can do a lot better than that fessy-fucker.

He looked pitiful and should have done better, but Tommy was saddled with another of the notoriously weight-based challenges. That said, the no-tear crying was an embarrassment. He seems very “special needs.” I bet he’s a huge hugger with his coworkers at the pen factory.

Nelly T with the daily win! Is this a sign of things to come, will he be the challenge champion???

Veronica went overboard with the botox or fillers or fire…whatever the hell she did to her face.

Jay and Michelle really shit the bed.
They had a chance to throw in vets but wimped out thinking bananas and nany will owe them a favor later.
Bananas has fucked over his best friends in the game over the years but Michelle thinks she has an iou, crazy.
Jay is an idiot and so is Michelle

Strange as fuck.
Michele is so stupid. Fucked them over as much as to STEAL a half Milly from Sarah. I’m not sure how that dude ever recovered from being the biggest POS in the show. When hurricane Ashlee fucked over hunter it was a long time coming.

Veronicas just extremely fat.
Nelson’s crush has HUGE arms, she gonna be a bigger one shortly.
I can’t decide if sometimes laurel looks OK and other times she’s disgusting (like when she was chopping her pelvis when she cheated on the climb against ninja.) Or she’s just fully disgusting. My eyes are fucked up.

I mostly agree. They fucked up by half-stepping, imo. You throw in 3 sets of vets, then panic and want them on your side? If you’re going to do it, just do it and align with the rookies. They did the worst of both worlds. Didn’t get rid of a vet team and didn’t get any allies (maybe Johnny). I tend to think Johnny does mostly keep his word in these situations, so there’s a good chance he does pay it back, but I don’t understand why he offered it. They didn’t ask for it in advance, so he’s order no obligation to pay it back just because they tried to salvage something from their shit decision. They didn’t throw him in out of fear. That fear remains.

Also, you have to be deaf and blind or have never watched the show if you think Laurel is one to forgive.

Also, also, did Laurels homo get lip injections? JFC, I don’t know how Jay sat there having a serious conversation with a guy trout-pouting.

Michele is so stupid

Also, Michelle and Jay are together, right?
Wasn’t Michelle in bed with another dude last week??

elson’s crush has HUGE arms, she gonna be a bigger one shortly.

I do not find her very attractive. Too much work and makeup and she’s a “skinny fat” for sure. She’s shaped like a Lego. I can see how the illusion fools people, though. Something about blonde hair and a bunch of makeup has a smoke and mirrors effect.

Pic of Nurys to cleanse the palate. 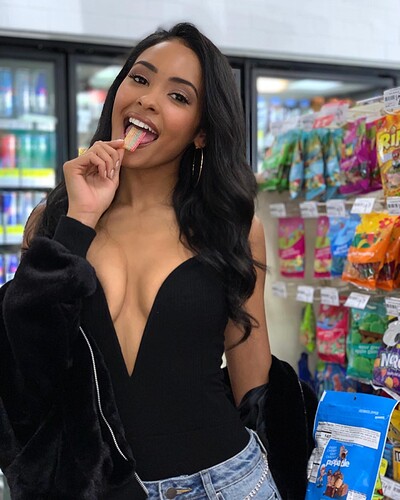 I can’t decide if sometimes laurel looks OK and other times she’s disgusting (like when she was chopping her pelvis when she cheated on the climb against ninja.) Or she’s just fully disgusting. My eyes are fucked up.

I’m a big laurel fan, but understand she can be unbearable. Also, I do find her attractive, but I like athletic chicks and her dominance over the other girls…me likely. She needs makeup and a smile to look her best, though. She rolled into that elimination meeting with Jay and Michelle looking like a stay at home mom after 9 on a school night.

She’s also very smart IRL. She is a veterinarian, which most people realize is one of the most difficult professions to attain. She got her doctorate in May.