The fight of our lives is nearly upon us

It's not often that we get dream fights in MMA. They either never happen (Fedor v Lesnar) or they happen after they matter (Wanderlei v Liddell). Unfortunately for fans, we never quite get what we want the most. 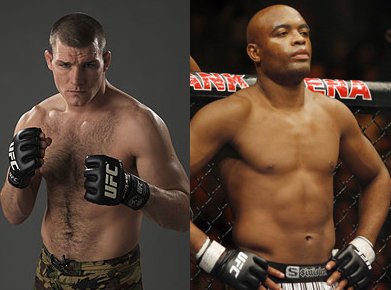 One of the dream super-fights that gets talked about is Anderson v Michael Bisping, and we can thank our lucky stars that this fight is likely to happen very soon, while both are in the peak of their careers and while interest is at its highest. There is simply not another fight out there that would pit two elite level fighters of this caliber against each other, fighting in their natural division, utilising the offensive elements of MMA that have made this sport as popular as it is today. This won't be a yawnsome wrestlefest because there wont be an American involved. This will be a display of the dynamic skills that few others can emulate, and a bringing together of the most creative cultures in martial arts as Brazil and the UK show the world what it means to bring the art to this wonderful sport. Two fighters who represent everything that is exhilarating about MMA. Two fighters that have paid their dues and deserve to be rewarded in the biggest fight of all time. Words can't describe how electric the atmosphere will be that night, especially if this monumental event takes place in the UK. Alternatively, Rio in August will do as the Brazilians are perhaps the only nation on Earth that can bring passion to a sporting event in any way close to the British.

This will also be a changing of the guard. The ushering in of a new era as Michael Bisping wears UFC gold for the first time, and for a long time. Only Rivera and Belfort stand in the way of making this dream a reality. And in reality, neither can do a thing to stop this from happening. Anderson wants it. Bisping wants it. The fans want it. Let's do this. I told you all that Bisping would be champ in 2011. I made an ongoing thread about it. There are others who feel the same way. UKTT are the few who can see things with clarity and rationality. If you want to join on the bandwagon now then feel free, because when the Count is wearing gold by this time next year, you'll want to be one of us who can say, 'I told you so'.

i like bisping but cmon hes not going to win.

EB.....do you truly think Bisping has a good chance at beating Anderson?

I mean it's MMA and ANYTHING can happen.....but in your opinion would you say it's likely that Bisping will be victorious?

Personally, I don't think he has a chance. And that's not a reflection on Bisping....it's a reflection of how highly I think of Anderson.

Come on mate, you can't be serious can you?

Anderson talks about fighting him once, and this is no way a super-fight.

A super-fight is gsp vs. anderson.

Bispings sole category that he could be said to have even the slightest advantage in is cardiovascular conditioning.

If he can somehow drag the entire fight out til the 5th round, while again somehow making Anderson work without getting GORKED by strikes, he could in theory get a decision win.

You can tell it's a troll post by the second sentence when they say Fedor vs Lesnar is a 'dream fight'.

I bet this fight happens soon to, knowing the UFC. I can already see the ads for it

ONE MORE MAN STANDS IN HIS WAY

bisping doesnt even deserve to be in the octagon with today's silva. maybe he would have been a good fight following leben but today? no way. he has nothing to offer silva

This "sacrifice" of a fight will prove nothing and will probably flop on PPV. But at least we will get to see some good antics.

this shit cracks me up.

silvas on another level than mike. bisping can beat a lot of fighters but silva is the absolute man at 185 and its gonna take a monster to beat him. i dont think mikes the guy to do it

Lol. I'm not sure if you're joking or retarded, but either way it's funny.

Im more interested in Bisping vs SIlva than Okami vs Silva

okami has a beter chance of winning. he can actually wrestle sort of

this would definitely be bispings fight of his life. For anderson it would be an enormous step down in competition.

Much worse than cote

but it's irrelevent anyway. bisping can't even beat a contender to get to a championship fight in the first place. though he does make for a great KO highlight. he's just on the wrong end.

We saw what Anderson did to Henderson.


We saw what Henderson did to Bisbing.


Dude, we do NOT need a death in the UFC right now.


Do you understand that???