"The greatest night in kickboxing!" Well..was it!?

I would say some of the Karatemania’s of the late 80’s early 90’s were better cards, especially 1, 2 & 8. many top American Kickboxers fought on them like Jean Yves Theriault, Brad Hefton, Dennis Alexio and Rick Rufous.

Tell me what you thought, this guy does great work.

Please watch his retrospective on Karatemania and enjoy. 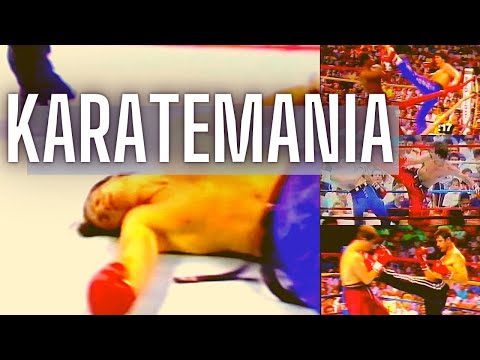 Also bro…my boy Jean Yves is a fellow Canuck do not get it twisted homie.

The Twin Dragons - Mick and Martin McNamara. They were old school kung fu guys that actually produced some pretty good kickboxers out of their gym. Probably the best of the bunch was Paul Biafore, who fought on the Mass Destruction card, but his fight wasn’t shown on the original PPV IIRC. I think some highlights were put on the DVD. Years ago, I’m talking more than 40 years ago, these two came out in a magazine article with a no holds barred fight to the death challenge to anyone man enough to accept a fight against either one of them. Never did hear if anyone took them up on it, I doubt it. Just kind of shows how cocky these guys were. To their credit, I think one or maybe both did actually step into the ring, but were never much as far as kickboxing goes.

Agreed that the Karatemanias were much better events. Better talent and better promoted and organized.

KM3 with Alexio vs Rhome, Hefton vs Battarelli, Roufus vs Knorr and Kathy Long also fighting, along with KM7 with Alexio, Roufus, and Vizzio were both pretty good events. I saw both live.

IIRC, Wilson was the only fighter on the Mass Destruction card that actually got paid. Everyone else got screwed out of their purse by the promoters Scott Haddad & Phil Malonson.

Excellent contribution to this thread very glad I started this one from the stories garnered here.

But you are positing retrospective shit bro! Did you watch that and give it a thumbs up? His channel rules.

Very cool that you attended those fights and thanks for the bit about the Mcnamara bros.

Crafty Don Wilson reportedly knew from being around that he best get his purse up front because something was rotten here and sure enough.

How long did Vizzio go for? What a machine he was early forties in the PKA, fought for them for 17 years or so.

I didn’t watch the fights on the YT channel posted above. I bought the original PPV and taped it when it happened and I also purchased the DVD when it became available later on.

I’m wrong about Vizzio being on KM7. I’m confusing it with KM8 where he fought Juan Torres. It was actually Torres vs Jorge Angat on the KM7 card at Lake Tahoe. Theriault was supposed to be on the KM7 card as well, but he broke his hand before the fight and was there as an announcer. Remember Roufus going after him at the announcer’s table ?

Certainly then they fought in Montreal afterwards correct?

They did. What was incredible was the fact that Roufus, in about a 2 month time span, KO’d Mike McDonald at KM7. Then 2 weeks later he went to France and KO’d Rob Kaman and then fought Theriault about 6 weeks or so after Kaman.

Yea both men leading up to this in that above the waist era had a great run.

Lets also include the two wins over Manson Gibson and a win over Ernesto Hoost leading up to the Jean Yves Theriault showdown in Montreal.