The last duel in Europe, and it was filmed

Dueling is combat sports with weapons, and thus, like combat sports, its origins extend far back into our DNA. Formal duels with swords, or later pistols, developed out of the medieval judicial duel, and far older practices like the Viking Age holmgang - they were means of resolving differences.

In Europe, the United States, and Canada, the practice revolved around the restoration of honor. One’s standing among peers was more important in that time. What might now bring a laugh and roll of the eyes on Facebook, might back then escalate into a matter of life and death.

Mercifully, the practice died out.

The last fatal duel in Canada was in 1833. Robert Lyon challenged John Wilson over something said about a local school teacher. Wilson killed Lyon, and then married the school teacher.

The last fatal duel in England was in 1852, between two French political refugees, Frederic Cournet and Emmanuel Barthélemy. Barthélemy killed his adversary, and was hanged for the offense.

The last fatal duel in the United States was in 1859. The pro slavery ex-California Chief Justice David Terry killed abolitionist United States Senator David Broderick. Terry was arrested, but the case was dismissed. The site where the pair stood 10 yards apart is now a California Registered Historical Landmark. The pistols used sold at auction in 1998 for $34,500.

However, the practice lingered in pockets. In fact, the last duel in France took place in 1967, and it was filmed.

Gaston Defferre, then mayor of Marseille, and the Socialist party candidate for president, was speaking in parliament, when René Ribière began fidgeting in his seat.

In return, Ribière challenged Defferre to a duel, using an épée.

The épée evolved from light civilian weapons commonly used for dueling, like the small sword. Dueling swords were developed under pressure from the authorities, to emphasize first blood, rather than to the death.

Defferre, who was older by twelve years, offered dull swords; Ribière demanded sharp swords, to first blood. This is what it looked like. 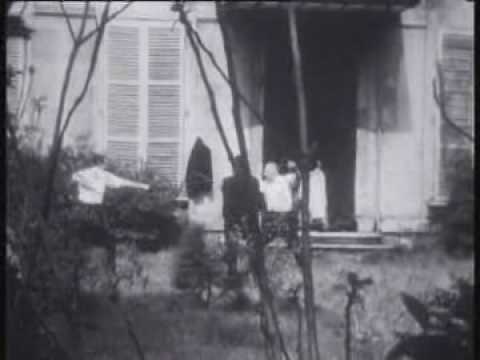 Ribière refused to stop when he was bloodied for the first time, but when it happened again, his second terminated the combat.

The pair are united forever in history, as the last men in France to duel.