The mantis shrimp's punch is so fast, it boils the water around it when delivered and can break aquarium glass.
When you think about the creatures with the most speed and strength in the world, the mantis shrimp probably doesn’t come to mind, but maybe it should. These creatures look more like miniature lobsters than shrimp. At 2-5 inches, they pack quite a punch.

Marine biologist Roy Caldwell learned this in 1975 when he was working at USC Berkley. When showing someone the shrimp, he tapped on the aquarium glass to provoke it. The shrimp was provoked, alright, breaking the glass and flooding the office.

These shrimp come in two varieties that scientists call “smashers” and “spearers”. Smashers crush hard prey such as snails while spearers pierce soft animals using spines on the end of their specialized limbs.

Smashers strike extremely fast. So fast, in fact, that a normal camera can’t pick it up with any detail. A high-speed camera revealed that they swing their “clubs” anywhere from 31 to 52 mph. At the time this was the fastest strike of any animal, in water or on land, but a few land insects have overtaken that. When you consider that it’s a lot easier to move through air than water, it’s hard not to marvel at the speed.

They move so fast that the surrounding water actually boils. This produces destructive bubbles that quickly collapse. While it may not seem like bubbles can do much, this process can destroy ship propellers, pumps and turbines. Here is another bad MFer of the ocean:

The Blanket Octopus rips off the Portuguese Man O'War's tentacles and uses them for defensive purposes
The blanket octopus is a type of octopus that occupies shallow waters in subtropical and tropical oceans. They are called this because of the long, transparent webs that connect the dorsal and dorsolateral arms of the adult females.

Unlike most species of animals, the females are much larger than the males. They can reach 2 meters in length while the males are only a few centimeters long. The male dies shortly after mating and the female carries nearly 100,000 eggs at the base of her dorsal arm.

The blanket octopus is immune to the poison of the Portuguese Man O’War. This allows the males and immature females to rip off the man o’war’s tentacles and use them for defensive purposes. The females also unfurl their net-like membranes to increase their apparent size.

in for the fury and anger

Why --out of the 600+ styles of chinese martial arts-- there is not a single kung fu style based on the mantis Shrimp, is one of life's great mysteries.

--WHOA... I think I just found my purpose in life!

Where can I get mantis shrimp for my weekend bbq??

One of my favorite infographics ever, love it every time it shows up!

This vid is hilarious. Vu 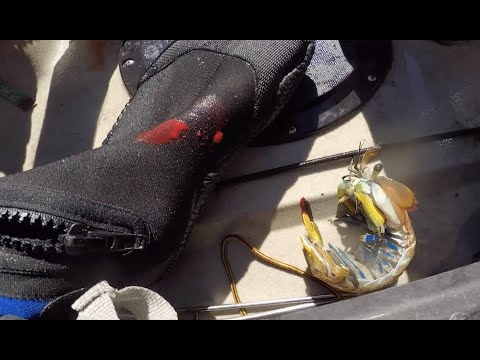