Rhys Darby
(formerly on the Flight of the Conchords HBO series) on his time in the New Zealand Army. He was actually a signaller in an infantry unit from 1991-1994. 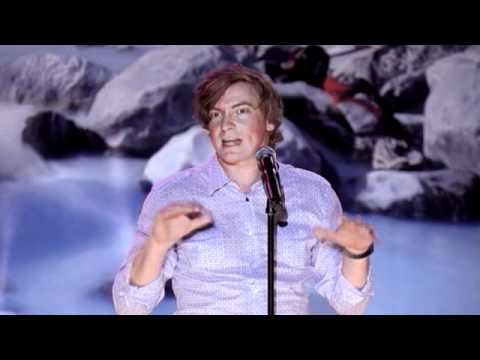 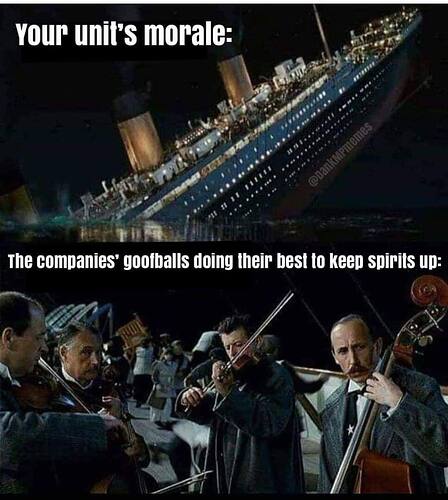 My barracks roommate Mac was definitely one of the companies’ goofballs - would literally do anything for a laugh and had a sort of off-kilter Norm MacDonald-like take on humor. One morning we had finished PT and were showering in our latrine on the 3rd floor. Mac was shaving. B company was downstairs having their morning formation, and they did some long rah-rah shouted company slogan when their First Sergeant called them to attention. Mac swiftly smeared his entire face and hair with white Barbasol shaving cream, flung open the latrine window, leaned out and yelled in an old man voice 'HEY! YOU DAMN KIDS KEEP IT DOWN OUT THERE!" Time seemed to stand still for a moment while everyone in B Company stared at this white, foamy-faced spectre, then the First Sergeant turned and ran towards our barracks entrance. Mac said “Oh, shit!” jumped under a shower head to wash the incriminating shaving cream off, while we all scattered in varying stages of being showered or shaved. Mac and I both ran down to our rooms and locked ourselves in. I heard an enraged First Sergeant running down the hall, barging into rooms and pounding on locked doors (while Mac and I cowered behind ours, desperately trying to suppress giggling), demanding to know who yelled at his formation. None of us ever gave Mac up, and our First Sergeant yelled at us during the next formation, although you could tell he thought it was kind of funny too, and probably knew it was Mac because, well, he was the Company Goofball. 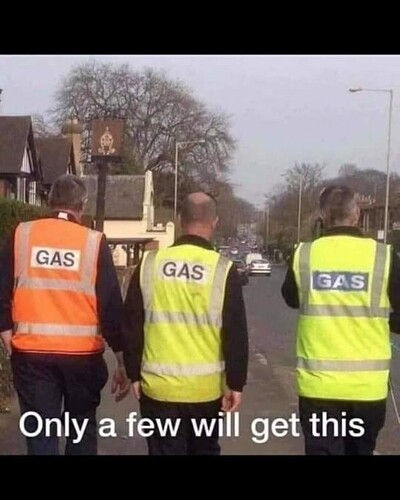 People like Mac help you laugh when otherwise you would be crying. 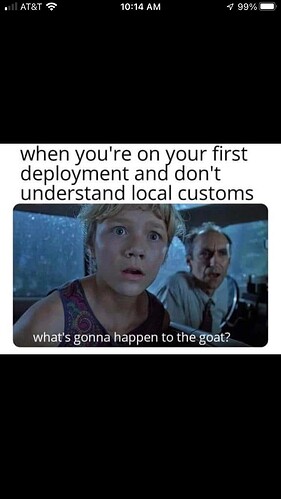 Back when men were men 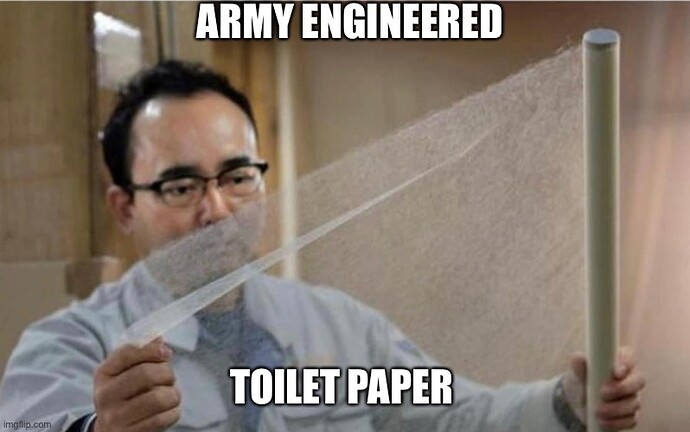 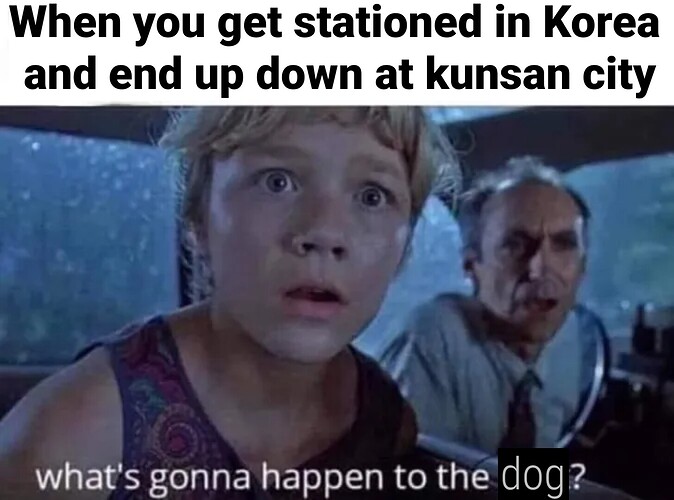 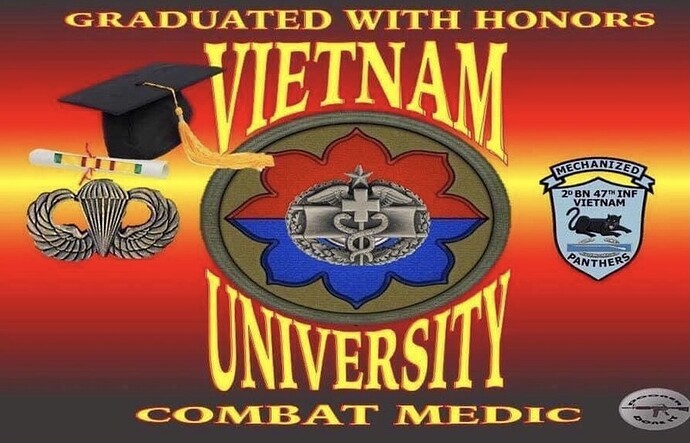 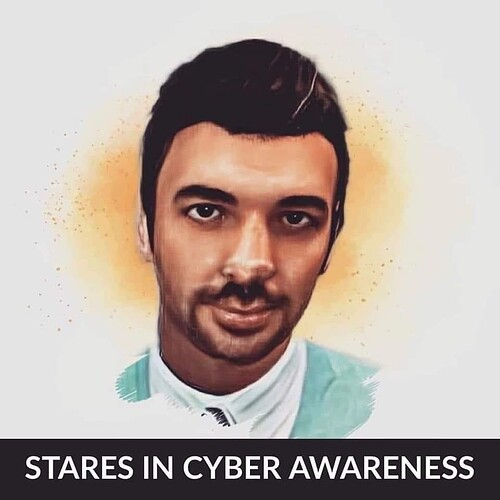 I hate this guy. 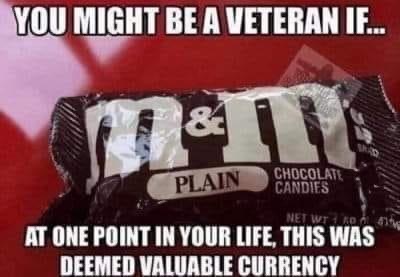 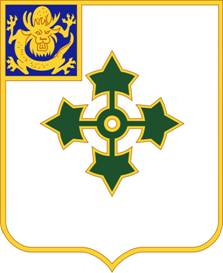 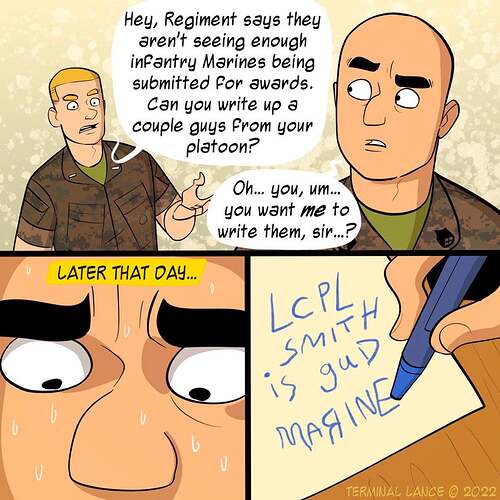 You might be a really old veteran if you used to trade the packs in the front row from C-Rats for other goods, like a prisoner. 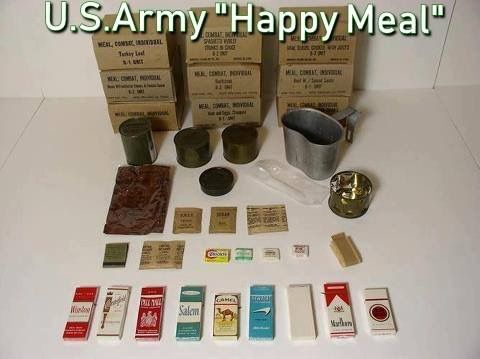 Maybe modern rations should have two cans of Rip-It, a pack of cigarettes, a small bottle of Jagermeister, a candy bar, a packet of beef jerky, No-Doz, and a medicated wet ass-wipe.

You forgot a can ofCopenhagen.