The Northman is so bad its a comedy

This is like hollywood made the troll 2 version of braveheart. The acting is cracking me up, everything about this movie is just so bad lol

Yeah it was pretty shit

The previews made it look like the movie would be a 10/10. But it’s really more of a 6.5. I’m not sure what it was but the pacing or directing was off.

I think, given the current climate, I would believe it should be shit. I’m not even fucking watching now.

One of those Hollywood trap movies to pull you back in. Blah. Real world way more interesting than that shit.

Hollywood lost me… knew everything about every movie pre 2015. You could tell things were starting to get fucky. Now w Netflix, nothing the same. Or rather, all of it is the exact fucking same if it is on Netflix. Mass produced shit. Not worth my time.

Look at a24 films or gravitas pictures. They both hit me as good studios, but also probably complete Hollywood. Just not Netflix produced. Lot of liberal shit, and I’m an ULTRA MAGA!!! (Love that title) but they can both make good movies.

Look at a24 films or gravitas pictures. They both hit me as good studios, but also probably complete Hollywood. Just not Netflix produced. Lot of liberal shit, and I’m an ULTRA MAGA!!! (Love that title) but they can both make good movies.

I think they got confused thinking they were making 300 with the lighting and music but got lost somewhere. 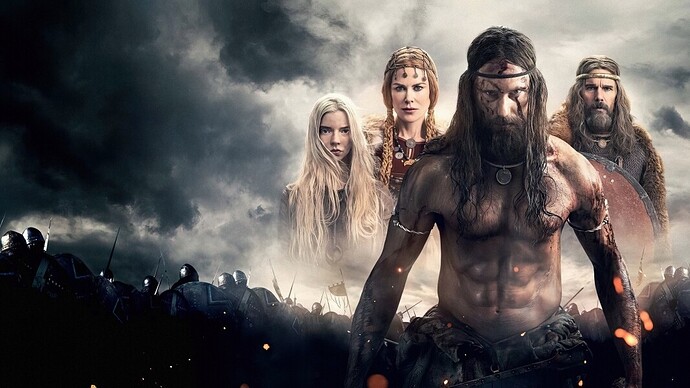 I made it about 10 minutes in and pulled the ripcord. It reminds me of a parody.

It wasn’t what I expected but it wasn’t terrible.

The irony of how the bitching is, it is easily the most historically accurate depiction of Norse culture, dress, and lifestyle ever produced by Hollyweird…

It could have used some Ragnar facial tics

The trailer looked fantastic. But so did the trailer for The Phantom Menace.

I was surprised it wasn’t an A24 film. Then when I watched it I understood why. Wasn’t woke at all. Yes it had its artsy moments. But it was a very well made and beautiful film. The few action sequences were amazing. A24, as much as a breath of fresh air they are with their originality, have become predictable with their over the top anti-Catholic, straight, white man propaganda.

I thought it was great

I just couldnt believe how fuckin corny it was. The acting is so bad. Its actually entertaining though, just not in the way it was intended. It really is like a big budget troll 2

Amleth was a direct inspiration to Shakespears Hamlet. Thats why it might have felt a bit to heavily over acted.

I enjoyed even though it wasn’t completely accurate to the story. Some of the fighting scenes where great while others where bad.