Just finished the incredible wartime story of Robert de La Rochefoucauld… captured and escaped three times, at one time enduring 4 months of Nazi torture. The French aristocrat was recruited, and trained by British Special Operations (SOE). Even his own family didn’t know about his exploits until after winning Frances Legion of Honor 50 years after the war.

There’s a cspan video, where I first learned of this story from the author.

DreamWorks bought the story… but who knows if they’ll actually make the movie. 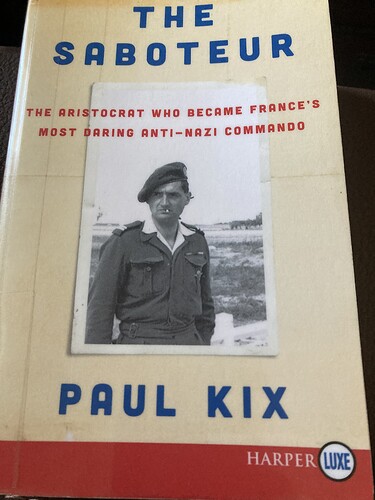 Resistance guys and gals were no joke. I used to have a very nice neighbor who was in the Dutch Resistance. He showed me a photo once of a much younger version of himself next to a derailed Nazi train, holding an StG-44. He didn’t look like anyone you want to screw with. I appreciate that despite the farcical nature of “Hogan’ Heroes”, the show never made light of their Resistance contacts or their activities.

DeGaulle/France perpetrated the myth that the country was full of resistors… but in truth only about 2% actively resisted, while 20% collaborated.

Suddenly after the Nazi left the streets were full of men in uniform. They had a name for them… Napthalenes, after the smell of mothballs that clung to their uniforms.

Your friend was badass.