Here’s what I ended up with
Shadowman
Castlevania 64
Ken Griffey Jr Slugfest
WCW vs NWO Revenge . Which is the 3rd best wrestling game on the system, but No Mercy is stupid expensive. WM 2000 was reasonable, but I still went for the cheaper option, and got 2 games instead. They’re all pretty much the same, minus a few game options anyway.

Oh, and a couple weeks ago I ordered a cool Bluetooth n64 controller just to use on my laptop, really, but it also came with a wireless adapter, you can plug into the actual 64. Ballin’.

So, probably no one cares, but when I bought the 64 at the pawn shop, they gave me the choice of 2 different ones. One was nice and clean looking and the other one was pretty nasty looking, so I chose the clean one. But while I was talking to them I noticed the dirty one had an expansion pack, and the clean one just had the jumper pack. I know this now, but when I was there I wasn’t 100% sure there was a difference. The lady actually made a weak ass attempt to swap them, but she couldn’t get it out. Then she said, “Oh, the other one is the same under the red cap”. So, I’m like, cool. Anyway those expansion packs are expensive af. A brand new 3rd party one or an official used one go for $80-90. Even used 3rd party ones go for like $50…If I had know that while I was there, I would’ve been much more adamant about swapping the packs.

No worries about which wrestling game you chose. They all play the same. WCW/NWO Revenge is fucking awesome. You won’t be disappointed.

Agreed, I’ve actually owned it before, along with WM 2000. I would even still play WCW/NWO even after I had WM, just for the roster alone.

I’m gonna head down the the pawn shop in a bit, and see if I can trade a few 360 games for 64 ones. I’m not going to ask if I can still swap the packs, but I’ll just mention what happened in conversation…maybe they’ll throw me a bone.

I think I am actually going to get one of those everdrives. There’s an alternate version for $70 that comes with all the games preloaded.

I haven’t even played it yet, still waiting for the games I ordered. They’ve all shipped, so maybe today…

Anyone know where I can find a replacement joystick for this? They just screw in and out. I’ve been looking, but haven’t seen one just like it. 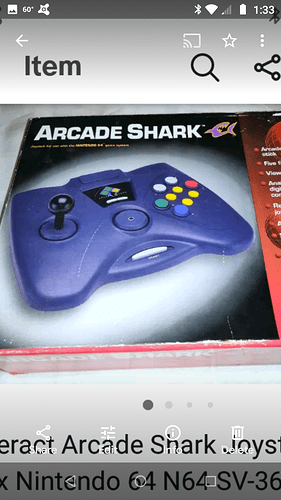