Think you can take on this 56 year old? 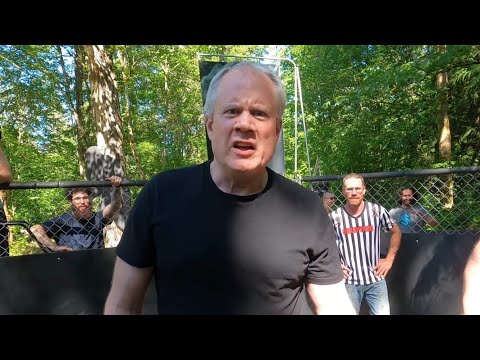 Hes super slow and beat a fat midget. Id torture him with body shots cause I hate old people.

Yeah, no. I feel like if I punched someone these days I’d hurt myself more than them.

Should be a thread about Rhinohog.

Giy is slow but he packs a punch. I don’t know if I’d beat him in boxing because he is a big honkey. In Muay Thai I think I chop him down and MMA I got him

Hes super slow and beat a fat midget. Id torture him with body shots cause I hate old people.

That old man would fold you and bend you.

It would be worse than Putin vs griner

The stairs vs Biden

I’ve seen guys that throw slow arm punches that look like shit but they put people down. This honkey has that power. It’s like being hit by a bus going 35 mph

He hits hard though.

Id say the smaller guy could have used some distance to avoid those hands. I bet the older guy had some deceptive strength.

He’s got deceptive power and looks like he spent some time in a gym or two in his younger days. With his aging speed, plan A would be to move and faint him into something I could counter with step one being DONT BE THERE TO GET HIT

Plan b would be for abortions

That dude is older me. He’s tall, thick, has zero head movement and hits hard. He does have bigger balls than me because I’m done fighting and wouldn’t jump in the ring for any amount of money now.

This is kind of short-sighted of you. He might have an attractive granddaughter.

I am sore AF from going to a waterpark and riding all the slides. Woof.

I’d duck and weave and get on the inside and chain punch that old man like i was Dan the Wolfman.