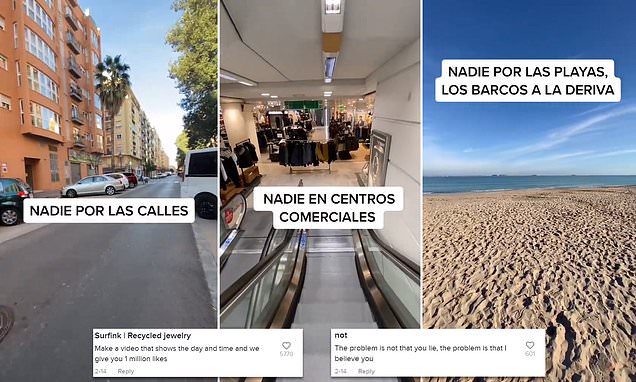 Man claims to have woken up in the year 2027

A man known as Javier, has gone viral on TikTok after claiming he woke up in Valencia, Spain in the year 2027. However some viewers pointed out the clips were most likely simply filmed in lockdown.

This shit is pretty crazy. This guy claims to be in 2021 but all electronics say it’s 2027. There are literally no people, birds or anything in his videos. He lives in Spain and when people tell him to go places, he goes there. This shit is a trip. I’m sure it’s somehow fake but however he did this is amazing. The craziest one is where he goes to the airport and no one is there. Or the police station. He has the fucking key to get in and takes a police car.

Here is his ig

https://youtu.be/XvsCisbzT9s This guy breaks down a lot of the videos

Crazy that no new car models will be introduced in the next 6 years.

Its legit. Everyone knows its impossible to change the date and time on electronics. I think we all know it’s not true , the real confusion and question is how does he pull it off

Who wins the superbowl the next five years? We can get rich here

Exactly … how the hell is he doing this. Some theories are:

At least the last people on earth cared enough to bury thousands of bodies a day so the streets wouldn’t be filled with decaying corpses. If I am the last surviving 10% I will clear up my area and let the rest rot

Someone made a thread about this a couple weeks back. Like I said in there, it’s not about if it’s real or not, nobody believes he’s actually in 2027, the fun part is figuring out how he does it.

I don’t believe it’s software, because the processing power would be massive. I also question the requests he gets. The people making the requests might be in on it, either his alt accounts, or friends of his, and they’re requesting things he either already has footage of, or that he can get

Someone in the comment section made a good suggestion. Go to a museum and just start breaking shit. Or grab a pistol and fire off a few shots into a store front window. Of course he won’t do that.

It’s a heck of a troll job. I’m pretty sure the keychains that he left for people to find were the Nike Back to the Future shoes?