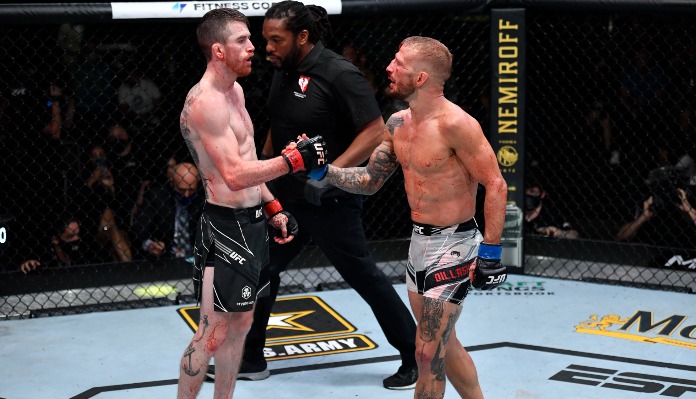 Former UFC bantamweight champion TJ Dillashaw admitted that he lied to the referee during the recent Cory Sandhagen bout. 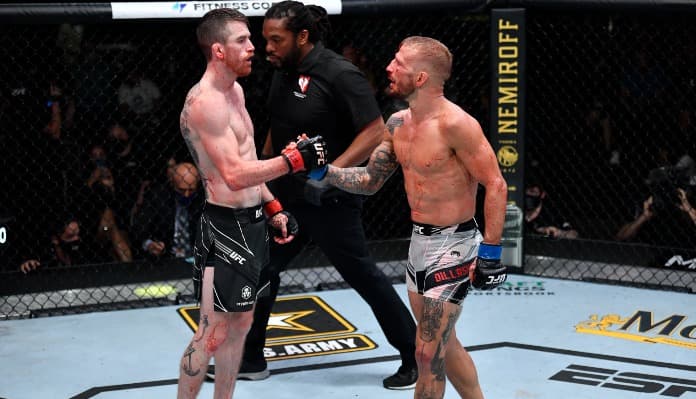 Former UFC bantamweight champion TJ Dillashaw admitted that he lied to the referee during the recent Cory Sandhagen bout.

Dillashaw and Sandhagen fought for 25 minutes to a narrow split decision back in July that the judges ultimately gave to the former champ. Speaking to Submission Radio following the fight, Dillashaw admitted there was a chance that the fight could have been stopped because he had an injury to his eye that meant he had vision problems. According to Sandhagen, however, he lied to the referee and told him that he could still see fine.
“I guess camp kinda prepared me to be able to deal with injuries in the fight, I guess. Because I had to kinda bury my injuries down deep during fight camp, and I had to definitely do it during the fight. And then let alone getting open in the second round, my eye, having to lie to the ref and tell him I can see, I just didn’t want the fight to get stopped,” Dillashaw said (via MMANews).

“The doctor came in, I was like, ‘Yeah, man, I got it. Don’t worry. I can see.’ And at the time, I couldn’t, so walking out I was sure to take his wipey and I tried to wipe my eye even more and they told me I wasn’t able to do that, so just kinda had to tough it out, really, to be honest.”

Obviously he could see well enough since he made it through the fight without getting finished.

Damn near every fighter has to lie to the Dr at some point.

Bisping won a title on a weeks notice with 1 eye and never pissed hot.

I aint impressed by TJ

TJ is a beast. He beat the top guy in the division with one leg and one eye… A real alpha male.

I still don’t know how he got that decision. Sandhagen was piecing him up the whole fight it seemed.

To be fair, I agree with TJ on this issue.

Once you say you tell the ref you can’t see, or your leg is broken, the fight is getting stopped.

First 3 rounds were easy to score, 2-1 to TJ, round 4 and 5 were close and if you give either one to TJ he won the fight. It was def not a robbery by any means, just a close fight.

I’ve seen a lot of guys quit, they had a chance to continue but gave hints to the doctor they couldn’t see