"Tony Fauci deserves to be under criminal investigation" - Tucker The controversy over thousands of Dr. Anthony Fauci’s emails is growing by the hour, despite some media outlets minimizing the story. New questions continue to be raised over numerous seeming inconsistencies that the emails reveal between what Fauci has said publicly and what he said privately in his correspondence.

3,200 pages of emails were obtained through a Freedom of Information Act lawsuit filed by BuzzFeed News, covering from January to June 2020.

And more than 800 pages of emails were obtained by The Washington Post, covering correspondence to and from Fauci in March and April, 2020.

Some of the emails are surprising, to say the least.

An email from Kristian Andersen of the Scripps Research Institute in California told Dr. Fauci that “unusual features” of the virus led him to believe it was “potentially engineered.”

“The unusual features of the virus make up a really small part of the genome (<0.1%) so one has to look really closely at all the sequences to see that some of the features (potentially) look engineered.”

Anderson goes on to say “after discussions earlier today, Eddie, Bob, Mike, and myself all find the genome inconsistent with expectations from evolutionary theory”. Note: Anderson later published an article essentially saying the opposite.

The very next day after Anderson’s email, Fauci sent a seemingly worried email to his deputy Hugh Auchincloss:

“Hugh, It is essential that we speak this AM. Keep your cell phone on. I have a conference call at 7:45am with Azar. It likely will be over by 8:45am. Read this paper as well as the e-mail that I will forward you now. You have tasks today that must be done. Thanks, Tony.”

The paper attached to the e-mail discusses how researchers from the United States and China were manipulating viruses make them more transmittable to humans.

Auchincloss responded: "The paper you sent me says the experiments were performed before the gain of function pause but have since been reviewed and approved by NIH.” He goes on to say that an associate “will try to determine if we have any distant ties to this work abroad.”

An email from Dr. Erik Nilsen, a PhD physicist and CEO of a neuroscience research company, warned that his analysis showed that the Chinese Communist Party was sharing fraudulent data.

“I’m confident that China stopped counting [the dead] since —January 7 2020,” he wrote. Dr. Nilsen, who explained that he travels to China multiple times per year, also provided corroborating sources from within China: “My suspicions were eventually confirmed by at least two of my sources in China [REDACTED].” The names were redacted by the Freedom of Information release.

Nilsen went on to warn that Chinese data should not be used for analysis.

“If people analyzed the world’s data including China, the results are heavily biased towards nonsense, because China’s number of cases accounted for the majority of cases worldwide (until a day or so ago).”

Fauci’s response: “Too long for me to read”.

Peter Daszak, whose non-profit was responsible for funneling $3.4 million in grants from the NIH to the Wuhan lab, sent an email to Dr. Fauci thanking him for publicly denying the lab-leak theory.

“I just wanted to say a personal thank you on behalf of our staff and collaborators, for publicly standing up and stating that the scientific evidence supports a natural origin for [the virus], not a lab release from the Wuhan Institute of Virology,” Daszak wrote. “From my perspective, your comments are brave, and coming from your trusted voice, will help dispel the myths being spun around the virus’s origins.”

Fauci responded with “Many thanks for your kind note.”

These are just a few of the emails that are drawing significant attention. There are many others that are raising eyebrows, including one from Feb. 5, 2020 in which he says that he does not recommend wearing masks. And one from Andrea Lerner of the NIH on April 2, 2020, saying “Given our discussion this AM, just thought I would summarize my take on masks across varying scenarios”…

…The whole rest of the email is blocked out by censors.

While the the above emails and others are leading to widening scrutiny from politicians and some media outlets, others don’t seem very interested at all.

Both Buzzfeed and The Washington Post ran stories that centered on Fauci saying he was exhausted from so much work, and expressing surprise over his newfound celebrity.

And CNN gushed that "Thousands of emails from and to Dr. Fauci reveal the weight that came with his role as a rare source of frank honesty within the Trump administration”.

He should be in prison. 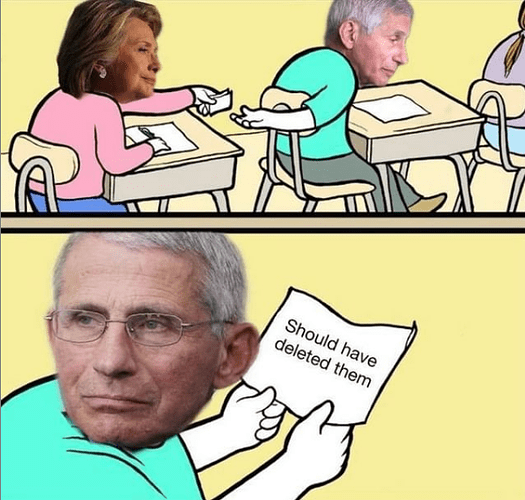 Just pulled his own book from being released.

Great video. Not surprised. Dude did the same thing with the aids virus in the 80’s

This has All been fascinating. Older doc I know, worked closely with, and respected, lost his fucking mind over this.

In the same way fauchi comes off, he’s just so excited to a part of history and wants to make his mark and is just generally excited about being in the center of shit.
Last thing he wants is for this to end and financially it hasn’t hurt him at all.

The left loves him, so nothing will happen.

Big Tech and MSM are already making this a non story.

He “stood up” to Trump and earned his “I don’t have to be logical or ethical” pass with the mob.

I’ve been calling Bill Gates and this scumbag out since day one of this bullshit. I love being right.

So buzzfeed takes him down?
Remember that great thread lol. 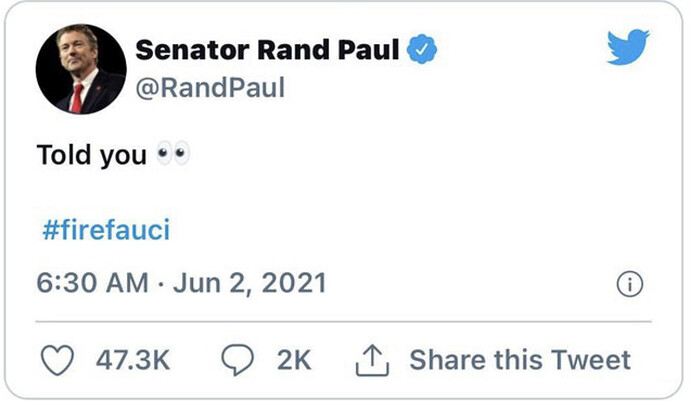