It was also nice to see the inverted scene again and they made it even better with the death spiral.

When is was in theatre the pilots had to stay tight lipped over what they were up to.we would get occasional intelligence briefs when command felt like it. My XO tho was a pilot and he’d tell me exactly what went down when he got back from a mission. He couldn’t give a fuck he was smoking convoys, he trialed out some new type of rocket, had tungsten rods in it iirc, when he got the Taliban with it it left them stuck to trees and everything.

Fyi, my brain has settled on 7 years as the terms of service until you can talk about this stuff. If I’m wrong I want a judge to know.

We got told off by the warrant officer for not making the pilots feel at home on beer calls (thats English military code for big drunken party ,) thier rank doesn’t exist in the bar.

I wouldn’t mess with the warrant, the pilots and eng ops can all fuck off

Fuuuuuuuck I upset tower as well

No rank In the bar

But you don’t fuck with boss

I think something else may be there was no great soundtrack …

Holy shit. This movie reviewer gave it 1/2 a star, see his moronic review, this guy sounds like a douche in real life. 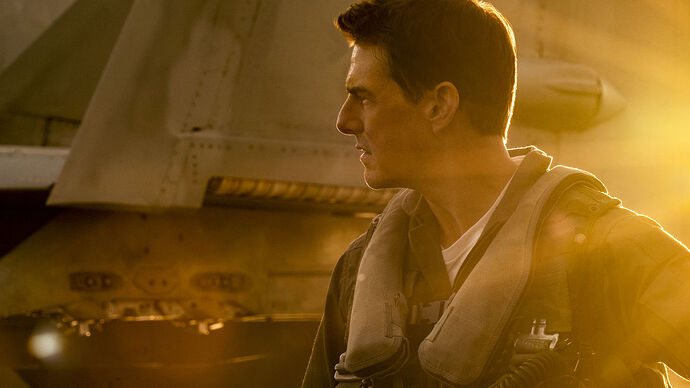 "Hi everybody and welcome to Top Gun: Maverick," Tom Cruise tells audiences in a brief pre-movie introduction. "...Our incredible cast and crew worked very hard to bring you the most immersive and authentic film experience we could. There's...

I hope in top gun 3, they replace Tom cruise with Elliott page.

Well good God damn. That was maybe the most perfect big screen movie I’ve ever seen. Just the right amount of nostalgia, awesome execution, great call backs and respect for the source material without being all history. Fantastic

He sounds like he didn’t watch it.
That’s wild if he got paid for that.
He rants about Iran, realistic portrayal, blah blahs, yet the film went out of its way to make the antagonists generic.

Maybe he should watch The Iron Eagle franchise instead

It really was a mind blowing review, how the fuck did he get that from a fictional movie? It’s not based on a true story ffs, some people just can’t enjoy stuff for what it’s meant to be, he sounds like a far left wing nut job

I saw it yesterday, it was probably the most I’ve ever enjoyed watching a movie in a theatre ever, I haven’t gotten that big of a movie boner since Lord of the Rings and Star Wars prequels.

And I was at a shitty seat in a small theatre.

Now that I’m back home I really want to go watch it at one of the brand new recliner chair massive screen theatres they just built downtown.

I never watched OG Top Gun, I’m not generally excited for Tom Cruise movies. My god I might try to watch the Mission Impossible movies now, never saw a single one of those either.

I’d give the movie a 98/100, it won’t have the rewatchability that OG Star Wars and Lord of the Rings will always have for me, but you’re missing out if you don’t go to the movies and watch this.

It’s one of the best movies I’ve seen in years. I’m suspicious of the military industrial complex and Scientology, but if they bring us cool movies like that, they can’t be all bad!

“Highway to the DANGERZONE!”

They explain in the movie. They said the target was “GPS scrambled” or some shit to insinuate that a guided bomb was out of the question. We all know its a bullshit excuse to use fighter jets where a stealth incursion would do, and we allow it, because Top Gun is an American treasure and we are good Amercians

The other issue is they wanted the actors actually in planes under G’s and to use as little CGI as they could.

And the newer planes the F22, 24, and 35, I think I got the numbers right, are all single pilot planes, and although Tom Cruise could probably actually fly one, the military doesn’t allow it.

So they basically had to create a wild scenario for why F18’s were needed.

It’s one of the best movies I’ve seen in years. I’m suspicious of the military industrial complex and Scientology, but if they bring us cool movies like that, they can’t be all bad!

“Highway to the DANGERZONE!”

I’ve been so anti MIC and Anti-American Interventionism that I’ve basically become an isolationist in regards to foreign policy beliefs.

BUT… That movie got me so fucking hyped today I looked up how many years I have left before I’m too old to join the military.

One other piece, I saw the budget was only (only lol) $170M. I figured for Cruise + all of that areal footage it’d be much more. That’s less than some of the animated movies coming out lately.

I looked today and gross receipts is about $ 820 m USD so far, about 50% US v Foreign. And that is without China !

I looked today and gross receipts is about $ 820 m USD so far, about 50% US v Foreign. And that is without China !

I’m really glad the movie is doing well. It would be a real shame for a great movie like this to fail and people thinking “blockbusters are over” or that there can be no great movies anymore. Like it’s so much more than regular popcorn schlock but it also doesn’t pretend to be an art film. It’s just a good old fashioned, well crafted, kick you in the face big time movie