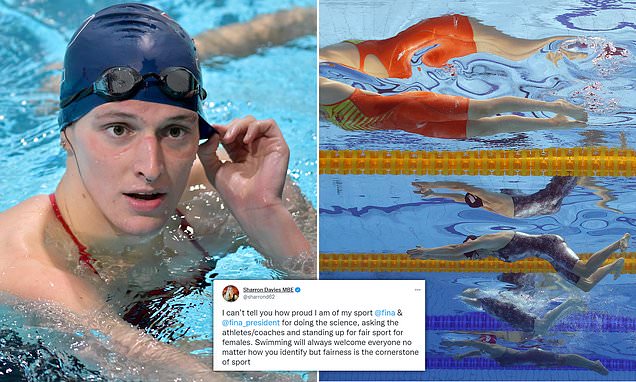 Swimming rules against transgender women who went through male puberty

Elite swimming is the first sport to ban transgender athletes from women's races even if they went through male puberty, the international sports federation for swimming announced Sunday.

Lia Thomas is BANNED from competing against women: World swimming’s governing body rules transgender athletes who went through male puberty cannot take part in female races and it will set up a separate ‘open category’

Lia Thomas, the transgender swimmer who broke women’s records this year, will be banned from competing against women in professional matches.

FINA, the international federation sports federation for swimming, announced on Sunday that it is changing its policies so that transgender women can only compete in women’s races if they have completed their transition by the age of 12.

It is now setting up an ‘open category’ for transgender athletes to compete against one another.

Such a policy would prevent Thomas from competing in the Olympics, which she has expressed her desire for after smashed women’s records and causing an uproar across the United States, with many arguing that she has an unfair physical advantage over her fellow competitors. 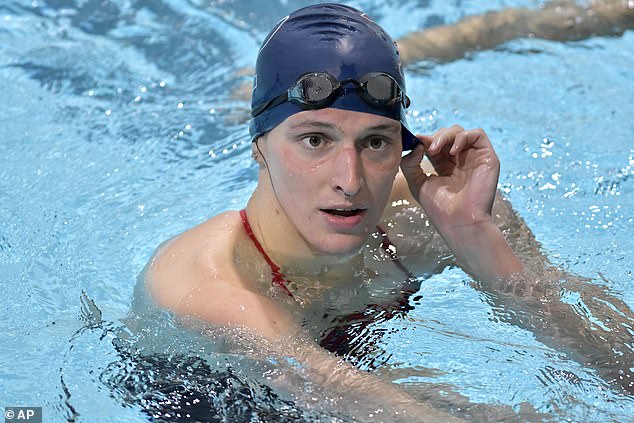 The decision to ban transgender athletes was made during FINA’s extraordinary general congress on the sidelines of the world championships in Budapest after members heard a report from a transgender task force comprising leading medical, legal and sports figures.

‘I do not want any athlete to be told they cannot compete at the highest level,’ Al-Musallam told a congress of his organization today.

'I will set up a working group to set up an open category at our meets.

‘We will be the first federation to do that.’

The new policy will require transgender competitors to have completed their transition by the age of 12 in order to be able to compete in women’s competitions.

It was passed with a 71 percent majority after it was put to the members of 152 national federations with voting rights who had gathered for the congress at the Puskas Arena.

Around 15 percent voted no to the policy on eligibility in the men’s and women’s competition categories, while 13 percent abstained.

Glad to see there is some normalcy left in the world.

i wonder if this is public, i would like to read it

Exactly. This just made the situation worse because of that reason.

This gives the “kids should be able to transition” crowd some ammo.

“We have to transition them while they are young or they’ll miss out on opportunities to play sports!”

He wants to compete in the olympics?? The gaul on this mother fucking monkey ass faggit.

Happy to see him compete in the circus……i mean open division though.

if they have completed their transition by the age of 12

Those motherfuckers! This is an outrage. Hopefully Lia teams up with Elliot and they go shooting rampage!

That’s how free America should be!

Glad to see there is some normalcy left in the world.

Not used to seeing “normalcy” and “left” so close together.

if they have completed their transition by the age of 12

Actually it’ll be super easy, barely an inconvenience. They can show their medical records, just like showing proof of vaccination.

medical records of what?

“Male to female transgender athletes and athletes with a 46, XY DSD (disorders of sexual development) whose legal gender or gender identity is female may only compete in FINA competition and set FINA world records in the female category if they can establish they have not experienced any part of male puberty,” said FINA Executive Director Brent Nowicki. “Athletes who want to establish their eligibility under this standard will be required to show that they have suppressed male puberty beginning as from Tanner Stage 2 or at the age of 12, whichever is later. And that they have since continuously maintained their circulating testosterone below the levels of 2.5 nanomoles per liter.”

Fucking bullshit! Let them compete. It was hilarious.

Give her medals from last year’s championship to the second place WOMAN, and move everyone up one place!

that was the NCAA championship, this is international/olympic swimming