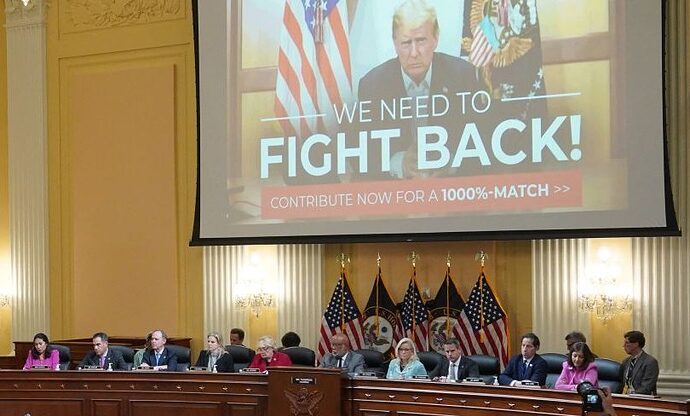 Trump’s political operation and Republican Party committees have paid over...

Former President Donald Trump’s political operation and Republican Party committees have paid over $12.6 million to individuals and firms that organized the Jan. 6, 2021, rally that preceded the deadly attack on the U.S. Capitol since the start of the 2020 election, a new OpenSecrets analysis found.

The full extent of the payments from the Trump campaign political operations to rally organizers during the 2020 election and around the rally in early 2021 remains a mystery because the campaign’s top vendor was [American Made Media Consultants LLC] a firm created by Trump campaign aides to act as a clearinghouse for its spending. Trump’s campaign and joint fundraising committee routed more than $771 million through the firm, hiding details of those payments — including information about the identities of some people paid by the campaign and how much money changed hands.

Information on Trump’s role in the events on Jan. 6 is obfuscated but the former president’s connections to organizers of the rally before the deadly attack on the Capitol are well-documented in campaign finance filings.

While firms and consultants involved in the rally are now controversial even in some conservative circles, a contingent of political committees tied to Trump and the Republican Party continue to steer millions to Jan. 6 rally organizers during the 2022 election cycle.

Trump’s political operation alone has reported paying more than $13.4 million to people and firms who helped organize the Jan. 6 rally with about $10.6 million of those payments occurring since the start of the 2020 cycle — including in the weeks leading up to Jan. 6, 2021.

In 2022, political committees tied to Trump routed more payments than ever to one firm involved in the Jan. 6 rally — Event Strategies Inc., the firm named in a permit for the rally that also employed two individuals involved in the demonstration.

Event Strategies Inc. was helmed by Tim Unes and Justin Caporale, Trump campaign aides who were listed on permit records as the Jan. 6 rally’s stage and production managers.

Unes was reportedly brought to Trump’s campaign by Paul Manafort, who served as the campaign chair. Manafort previously worked with Unes and Event Strategies Inc. for Ukrainian politician Viktor Yanukovych.

Trump’s political operation and Republican Party committees paid individuals and firms involved in organizing the Jan. 6 rally just over $3.5 million during the 2020 cycle and $2.5 million in 2021.

But groups aligned with Trump have routed more payments to Event Strategies Inc. with each passing year since the start of the 2020 election cycle, paying nearly $4.5 million to Event Strategies Inc. in the first four months of 2022 alone. In total, the firm has raked in more than $6.9 million since Election Day 2020 from Trump’s political operation and Republican Party committees.

Event Strategies Inc. continues to draw the biggest payments in 2022 for political work from Trump’s political operation with more than $3.2 million from Save America, Trump’s leadership PAC, and another $705,000 from Make America Great Again, Again! Inc.

Trump’s campaign, the RNC and Republican Party committees charged with presidential arrangements for the 2016 Republican National Convention —where Trump was nominated as the GOP’s candidate for president —collectively reported paying Event Strategies Inc. over $1.2 million during the 2016 election election cycle. 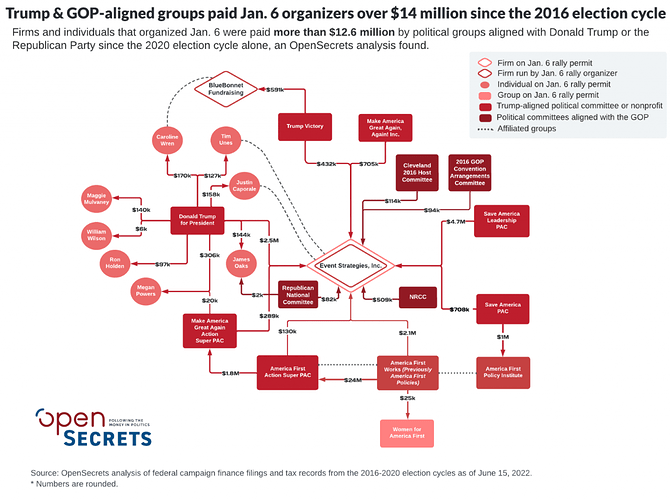 Altogether, groups aligned with Trump and the Republican Party have paid Jan. 6 rally organizers over $14.2 million since the start of the 2016 cycle with about $12.4 million of that going to Event Strategies Inc.

In addition to the Trump political operation’s payments to Event Strategies Inc., Trump’s campaign paid Caporale nearly $158,000 for work as its advance director in the yearlong period leading up to November 2020. Unes, Caporale’s business partner, was paid another $117,000.

While a small contingent of political committees continue to pay Event Strategies Inc., the firm and its partners have become controversial even among some conservatives. In December 2021, the Elizabeth Dole Foundation terminated Event Strategies Inc. partner Tim Unes’ from his role in helping plan former Sen. Bob Dole’s funeral after learning of his ties to the Jan. 6 rally.

BlueBonnet Fundraising is a firm founded by Caroline Wren, a top fundraiser for Trump’s campaign who was listed as a “VIP Advisor” on the permit granted by the National Park Service for the Jan. 6 rally. Wren reportedly boasted of raising $3 million for the protest before the Capitol riot. She then “parked” funds with two dark money groups that helped organize the protest and a closely-tied super PAC.

“”The evidence developed by the Select Committee highlights how the Trump campaign aggressively pushed false election claims to fundraise, telling supporters it would be used to fight voter fraud that did not exist,” Wick said in the presentation.

The campaign “continued to barrage small-dollar donors with emails” after Election Day, Wick stated, noting the campaign sent “millions of fundraising emails to Trump supporters” encouraging supporters to “step up” and “fight back.”

“Emails continued through Jan. 6, even as President Trump spoke on The Ellipse,” Wick noted, explaining that “30 minutes after the last fundraising email was sent, the Capitol was breached.”

Leadership PAC Save America made millions of dollars in payments to Trump aligned organizations, including the aforementioned payments to Event Strategies Inc. and a $1 million contribution to the America First Policy Institute, a 501(c)(3) nonprofit affiliated with America First Policies launched by former Trump administration officials.

“Evidence collected by the select committee highlights how they pushed false election claims to fundraise, telling voters it would be used to fight voter fraud that did not exist,” Wick announced.

Small dollar donors use scarce disposable income to support candidates and causes of their choosing, to make their voices heard,” Lofgren elaborated.

But the campaign “continued to barrage small-dollar donors with emails” after Election Day, Wick explained, sending “millions of fundraising emails to Trump supporters” encouraging supporters to “step up” and “fight back.”

“Emails continued through Jan. 6, even as President Trump spoke on the ellipse,” Wick noted, explaining that “30 minutes after the last fundraising email was sent, the Capitol was raided.

During the 2022 election cycle, other political groups have paid Wren’s fundraising firm more than $318,000.

Save the U.S. Senate PAC, a super PAC launched by Donald Trump Jr.’s advisers ahead of Georgia’s Jan. 5 Senate runoffs — which took place one day before the Capitol attack — reported paying BlueBonnet Fundraising $86,800 on Jan. 23, 2021. The super PAC spent $1.2 million on ads featuring Trump Jr. that are aimed at mobilizing Trump backers across Georgia.

Trump has yet to endorse any of the 2022 federal candidates paying BlueBonnet Fundraising though they have each have stated support for Trump’s ideas or vied for Trump’s endorsement ahead of 2022 elections.

BlueBonnet Fundraising has also been paid by the Missouri Senate campaign of Rep. Billy Long (R-Mo.) — who has received praise but no endorsement from Trump — and the short-lived Senate campaign of Linda Blanchard, Trump’s nominee for U.S. ambassador to Slovenia who switched to the state’s gubernatorial election after Trump endorsed her opponent in the Senate Republican primary. Blanchard poured millions of dollars into self-funding her campaign but lost to Gov. Kay Ivey in Alabama’s Republican gubernatorial primary.

The Influence of Groups Fueled by Secret Donors Behind the Jan. 6 Rally in 2022

Dark money groups involved in organizing the Jan. 6 rally before the deadly Capital attack have also remained active in politics.

Some of the groups sponsored CPAC in February while others have dipped their toes into 2022 midterm elections.

Women for America First, the 501(c)(4) nonprofit dark money group that submitted the rally’s permit records to the National Park Service, has continued spending on digital ads and organizing events into 2022.

Women for America First does not disclose its donors but America First Policies, the Trump aligned dark money group that has paid millions to Event Strategies Inc., disclosed giving the group $25,000 in its tax return covering 2019.

Women for America First has continued to pay for Facebook ads into 2022, though all of their ads since 2020 are emblazoned with a warning that Facebook “took down this ad after it started running because the disclaimer doesn’t follow our Advertising Policies.”

That didn’t stop those ads from reaching tens of thousands of Facebook users, according to Facebook ad data.

The dark money group’s most recent Facebook ads have promoted events it has hosted.

I have been a Democrat all my life and am no friend of Trump, Biden is doing OK as President, If Trump wins the next election I believe he will try to turn the U.S.into an autocracy.

Trump is an American Hitler…

Liz Cheney is winning the ‘Trump is unfit’ war: conservative 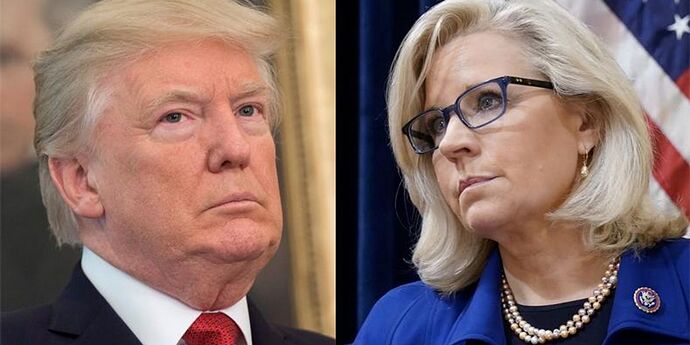 Liz Cheney is winning the 'Trump is unfit' war: conservative

In a surprising column for the normally Donald Trump-supporting National Review Online, longtime contributor Andrew McCarthy praised the work being done by the House select committee investigating the Jan 6th insurrection and singled out Rep. Liz...

In a surprising column for the normally Donald Trump-supporting National Review Online, longtime contributor Andrew McCarthy praised the work being done by the House select committee investigating the Jan 6th insurrection and singled out Rep. Liz Cheney (R-WY) for her demolition of the former president.

After three hearings, with at least two more to come, McCarthy suggested that the committee has made a strong case against the former president and stated, that while he doesn’t think the Wyoming Republican will hang onto her seat in the House, she has done the country a great service.

Beginning, “I’m about ready to pronounce Liz Cheney the victor in the January 6 committee hearings,” McCarthy added, “Congresswoman Cheney has been very effective in relating the committee’s blistering case against the former president.”

Adding that, like Democrats, “Cheney wants to keep Trump at center stage,” McCarthy suggested that she seems to be banking on the belief that: “If she could command the attention of the country for a few days in June, and present what happened as it has never been aired before, in a series of tight, well-scripted sessions, she could hammer home Donald Trump’s unfitness for office.” 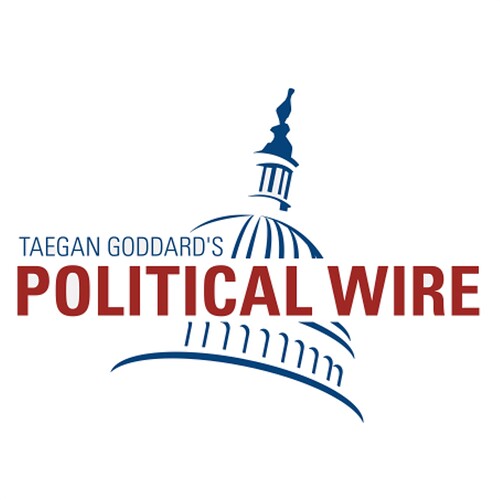 Aaron Blake: “At this point, the Jan. 6 committee’s hearings might as well be one big criminal referral to the Justice Department. And to make the case that Donald Trump and his allies broke the law, the committee has had to establish that they were... 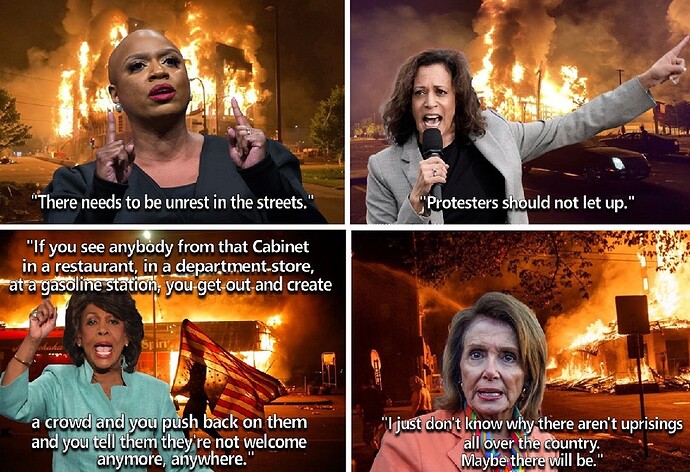 Biden is doing OK as President,

I think the DNC might be ready to put their full backing behind Bernie. Imagine having a president who actually wants to make lives better for regular Americans?

“I have been a Democrat all my life and am no friend of Trump, Biden is doing OK as President, If Trump wins the next election I believe he will try to turn the U.S.into an autocracy.”

WHAT I SAID IS *EXACTLY" RIGHT FUCKFACE…DON’T LAUGH, SHOW ME WHERE I AM WRONG THEN DIPSHIT!!!

Did BLM try to overthrow the government?

Did BLM try to overthrow the government?

No one tried to overthrow the government lol.

This is the new “Trump is about to go down” poster…?

You’re right, they were willing to keep the treasonous half

Imagine thinking Bernie is that guy…