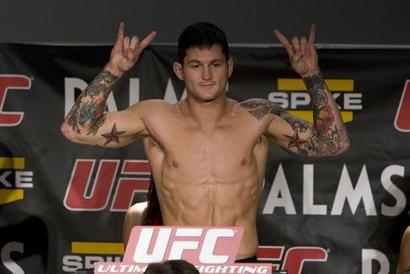 At this point in time, there are few bouts in the world that Frankie Lester would rather take than a grudge match against Marc Stevens.

The reason for this proposed dream-match is neither fame nor fortune, as Lester, a member of The Ultimate Fighter 9 is looking to take Stevens out for the sake of revenge.

“The story line between myself and Marc Stevens is that he is dating my ex-wife. We are separated and going through the divorce process and have a three year old daughter together—the love of my life, Jordan,” Lester noted via e-mail, “Joanna took off while I was injured and going through hard times before I made it on The Ultimate Fighter, then after just a few months I left for “TUF,” and when I returned she said she wanted to give it another shot, so whatever, we did. Then I was released from the UFC and had been injured and fallen on tough times and she took off again.”

nm thinking of some other TUF assclown

Is Marc under contract anywhere? I'm pretty sure the UFC passed on him so maybe the second biggest show in the world can make it happen, MFC.

Hey Frankie, don't fight Marc. Sympathize with him, because now that he's off TUF and likely not getting picked up by the UFC, there's a good chance she'll drop him too.

Why does he want to fight Stevens? He's just another dude in line. It's not like Stevens caused his groupie ex-wife to leave him.

No, but Stevens was apparently talking shit on Twitter about the situatiion

Doji Style - Is Marc under contract anywhere? I'm pretty sure the UFC passed on him so maybe the second biggest show in the world can make it happen, MFC.

for sure, cant wait to see him in mfc. they play that on TV right?

Crazy Zimmerman -  No, but Stevens was apparently talking shit on Twitter about the situatiion

Nanook beat me to it. Dammit!

TTT for "The Tank"

Crazy Zimmerman -  No, but Stevens was apparently talking shit on Twitter about the situatiion

Not sure if a grudge match would end the grudge.  When families are involved, shit get ugly.  Bad situation.

Looks to me like Lester is a simp and blaming Stevens for him being one.Instead of trying to fight a dude that his wife ran to,he should be working on getting some self esteem so he can move on.So what if Steven's talked shit? Obviously his ex is classless and Stevens will find out in the end.He is gonna feel really small if he loses and his ex runs in the ring to be next to Stevens during his victory speech.

They are both D level fighters from what I saw on the show.

Lester's the cocky guy who got his teeth knocked out.

And Stevens is the cocky guy who got guillotined twice then burned his bridges with his former wrestling coach Koscheck, by getting drunk and mocking him.

point is past is past.
new guy has no business spewing about old guy.
especially when there is a kid involved...

Frank Lester actually did really, really well on The Ultimate Fighter, imo.  He took out Mike Bisping's poster boy, Dave Faulkner (who won 90% of his MMA fight by leglock).  That was a great performance and a decent display of technique.

I won't argue Frank is very green still, I think he is way ahead in his career than he should be, but shit, T.U.F.?  Who woudn't take a shot at that show?!  He had a chance of a lifetime and made the most out of it.  Not sure when you saw Lester acting cocky?  He's a good dude all around, trains & coaches everyday at Team Quest Temecula, and since the show he has really tighten up his mma game.  He earned Dan Henderson's respect and that's all that matters to me...lol.