The program you are about to watch may have culturally inappropriate material ,Comes up before an episode of Gunsmoke. 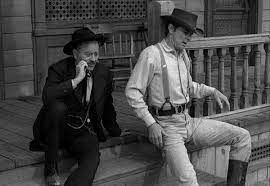 I read a book recently, a recent publication but it was set in the late 40s niore detective novel set in post war San Francisco.

It had a full page trigger warning that, due to being set in the late 40s, the characters displayed language & attitudes appropriate for that period and not consistent with modern attitudes. Readers were advised to continue at their own risk.

I knew from the very first page that I would love the book, and it didn’t disappoint.

Name of the book?

Razmataz. It was a sequel to a book with the same settings & characters titled Noire.

The main character has a Chinese buddy who works in a noodle shop owned by the buddy’s uncle, a fella named Uncle Cat Fucker. The buddy is quick to tell people that’s not his uncle’s actual name, it’s only what his name means in Chinese. His uncle got the name because one time, when he was a kid back in China, the family caught him fucking a cat.

The noodle shop seems to be open twenty four hours a day, and always seems to have the same six elderly chinamen in it. These chinamen are so old and there skin is so wrinkly that they seem to be composed entirely of scrotum skin. This leads to the main character’s name for the chinamen, the scrotum brothers.