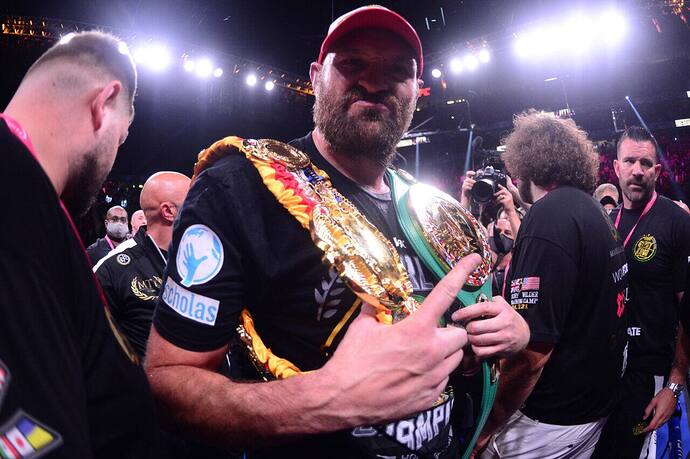 Tyson Fury vs Dillian Whyte ordered by WBC as next mandatory title fight »...

A bout pitting Tyson Fury vs Dillian Whyte has been ordered as a mandatory title fight by the WBC.

That will get about 144 ppv buys

Could be a decent fight,

Dillian has paid his dues and should of had his shot at Wilder years ago.

If Fury is fit and on form, then it’s hard to see him losing this.

Fury looked fat in a picture with hafthor I saw today. Hopefully he gets back in the gym/in shape soon.

oh for fucks sake, boxing is choking itself to death with this shit. John’s already said Tyson can’t be fucked with it. it is a mismatch. Dillian should take that sweet step aside money and try to avenge Frank Mir.

Dillian Whyte wins this fight.
Tyson’s heart isn’t in the game and he knows his luck is running out.
I wouldn’t be surprised if he pulls out or retires.

A mismatch? Whyte would be favourite against everyone Fury has fought and even money against Wilder. Who wouldn’t be a mismatch against Fury when he’s clearly the best HW boxer by quite some way. Usyk is the only question mark left at this point. Whyte & Joshua are both solid legacy wins for Fury, nothing more, it’s doubtful either of them can beat him

Going to be in Manchester or Cardiff. Will draw big numbers in the UK.

it’s lazy shit like this that gets you noticed as a troll account. be more patient you fucking yellow belt.

Dillian Whyte wins this fight.
Tyson’s heart isn’t in the game and he knows his luck is running out.
I wouldn’t be surprised if he pulls out or retires.

Whyte was destroyed by Joshua and Wilder. The only person that beats Fury is Fury. He could come into the fight uninspired and complacent and that would be trouble .

You’re right. Idk why,but I was thinking of Stiverne.

And Joshua didn’t exactly destroy him, Whyte put up a good fight and was the first to show Joshua wasn’t the killer people were hyping him up to be. That fight showed the glaring flaws AJ never fixed

Whyte is terrible. Fuck the wbc he should vacate.