Do you remember when you first watched 1 & 2? Did anyone watch them live on ppv?

What were your thoughts going into it? Did you know about Gracie bjj?if so, did you expect Royce to just dominate? If not, who did you expect to do the most well out of the different fighters?

After you watched the first few UFC’s, what did you think of the sport? Did you like the rules? Did you think there weren’t good enough strikers in the event? Did you want different grapplers?

I watched 1 and 2 live on PPV.
I knew nothing about BJJ, I was a big boxing fan growing up, but was SUPER excited to see these style vs style fights!! Actually saw the commercial for it on a boxing PPV prior.

Thought Royce was awesome, although it was obvious even them that these weren’t the best guys from their respective disciplines.

Even still, the style vs style was the peak of the sport in my opinion.
The fights just aren’t exciting to me anymore. I barely follow it at all.

I remember seeing the ppv commercial for UFC 1. Before that I had only ever seen point sparring matches, ISKA kickboxing, and this one tournament that was kind of like K-1 in style. I remembered that one had come down to a Japanese kyokushin karate fighter and an American guy who defeated the Japanese guy with some killer knees. Anyway, the UFC looked like the coolest thing ever. Back then I still believed Kung-fu movies were real life, so I expected it to be like Street Fighter 2, but real. Unfortunately, my mom refused to order it for me.

Flash forward a little bit and I see UFC 2 sitting on the shelf at Blockbuster. I picked it up immediately. I had no idea what BJJ was and I remember thinking that the Japanese karate master would probably run through everyone like Ryu. I remember seeing the beginning promo on how Royce Gracie had won the previous tournament and I thought to myself, “no way, the karate guy will figure it out and find a way to defeat him”. I was very shocked and disappointed when Royce simply took him down and tapped him not long after. I actually hated Royce Gracie and Gracie Jiu Jutsu for a long time after that, because I couldn’t stand how he just took guys down and submitted them. It was like he ruined the show with his cheap tactics. I remember rooting for Pat Smith to win that tournament, but by the end I was not surprised that he lost to Gracie. Even though Ken Shamrock was a grappler as well, he still threw some punches and I became a huge fan of his by UFC 3 because he seemed to have the best chance of beating Royce. I remember seeing his interview during UFC 2 about coming back next time to avenge his loss and I thought he was the coolest guy ever.

After that I started being able to get the UFCs on ppv. I even remember ordering Pancrase and extreme fighting (or something like that) with Mr. T doing the pre-fight interviews.

Later on Don Frye became my favorite fighter due to him having both the boxing and wrestling skills. He seemed extremely evolved at the time and I remember being shocked later when Coleman came out of no where and beat him. I was also a huge Marco Ruas fan.

It always bothered me how grapplers dominated back then, but I still loved watching because it was the reality of fighting.

It would have been pretty cool to have seen a legit hvwt boxer in the first few UFC’s. They would have lost to the grapplers but I’m sure they could have beaten the karate guys up lol

The style vs style aspect was fascinating, I agree. Back then it truly was boxing vs karate or judo vs shoot fighting… the fighters today are too well rounded

Remember the big grudge match between Royce and Ken Shamrock at ufc 5? Damn was it a major dud. Shamrock stunk up most of the ‘super fights’…

My life was turned upside down when I realized that Sensai Segal was full of shit!!!

It was a shit show with past their prime or fake fighters hand picked to lose.

I watched UFC 1 and 2 live on Ppv. I was familiar with the gracies from their in action videos and also had bought their instructional series and was 100% sure Royce was going to win.

Ken Shamrock, Oleg, Patrick Smith, Severn and Beneteau were all picked to lose?

Who did ufc promoters reject in the early days? From what I heard they invited Alexander Karelian and Tyson and top judo guys. Perhaps you are talking about the machado bros or lutu luvre guys?

Yeah, I saw this live and even though it was a dud I was on the edge of my seat the whole time waiting for something to happen. Royce Gracie was invincible at this time, so when Ken Shamrock was able to survive in his guard I was losing my mind, because he had neutralized his offense. When he landed that one punch standing I absolutely thought he might pull off the victory. It’s hard to remember, but I believe he was the first person to draw with Royce Gracie, and that was a huge deal.

I also remember freaking out during the Royce vs. Kimo fight, thinking Kimo was kicking his ass and was going to win. Then later celebrating when Royce Gracie had to throw in the towel before his next fight, as if that counted as a victory.

I just wish Ken had tried to do more during the super fight. He literally just tucked himself in and survived. The one time he tried to raise up, Royce had him caught in front gi choke of sorts. I remember Bob shamrock screaming at the top of his lungs “come on Ken, do something!!!” Lol

Royces performance vs Kimo was not that impressive. Kimo to my knowledge had no actual skill set at that time. He was just big, tough and athletic … oh and he looked the part of a fighter lol

Royces performance vs Kimo was not that impressive. Kimo to my knowledge had no actual skill set at that time

Say what.He had a black belt in Joe Son Do

They billed Kimo as a black belt in Tae Kwon Do,but I think it was bogus also.

Yeah Kimo never struck me as a karate guy. He was a brawler . Makes me wonder in those early days what exactly it took for fighters to get into the ufc. I heard they had to send in videotapes so I’d love to see what was on Kimos lol

Yeah Kimo never struck me as a karate guy. He was a brawler . Makes me wonder in those early days what exactly it took for fighters to get into the ufc. I heard they had to send in videotapes so I’d love to see what was on Kimos lol

Art Davie has said that he was sold on Kimo’s look (remember his claims of 5% body fat) Kimo looked like a monster. 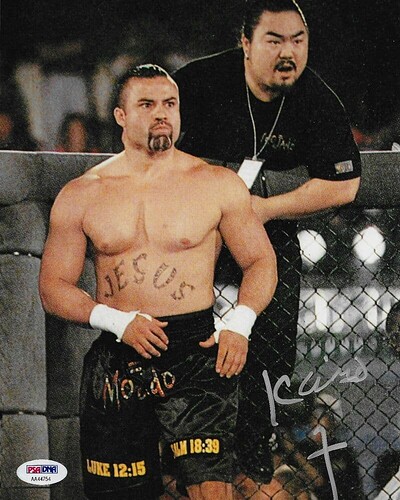 I wonder why they let Paul Varelans and Julian Sanchez in? All respect to Varelans(Rip) but he was just a real big guy . He never developed an actual skill set