Jalin Turner is a problem

He is now in a great spot, just got that big win and made it look easy, 5 fight win streak, lots of experience and only 27 years old. 6’3, thats a big LW. Just imagine what he walks around at compared to someone like Frankie when he was at LW.

Gillespie, Gamrot, Tsarukyan and Fiziev were my picks in December for fighters ranked outside the top 8 who would really climb the ranks and win big fights in 2022… not going out on a limb with those picks but those were my picks.

Gamrot has done tremendous and the Tsarukyan fight was close. Lets see whats next for both fighters. Gillespie shit the bed here. The moment of truth has arrived for Fiziev, the man is 5-1 in the UFC and riding five wins with last three over Carneiro, Green and Riddel, if he can go out there and beat RDA…he should be in the next #1 contenders fight vs Dariush or Chandler. Possible he will need on more but lets see.

This site is great for seeing everyone’s recent fights and upcoming scheduled fights. Highlights how deep the division is too.

I know some fights just happened and there is a big one tonight but not a lot booked right now for the top 30 LWs at the moment. I’d say Oct-Dec will shape up though.

Looked flabby vs Dustin but with proper time to fill into the frame would prob do ok. Dustin had years to fill into it.

Something Max lacks is reach, which isn’t often talked about. At 69", he’d probably have one of, if not the shortest reach at LW.

I don’t see Max having near the success at LW that he has had at FW.

LW was the right move for Dustin and Charles but I don’t see it as the ticket to success for Max at all. Not the type of success he has enjoyed at FW.

I don’t see Max having near the success at LW that he has had at FW.

LW was the right move for Dustin and Charles but I don’t see it as the ticket to success for Max at all. Not the type of success he has enjoyed at FW.

I agree, the LW’s are too big, unless Max can pack on a lot of muscle. His striking is right there at the top, but people like Oliveira, Gamrot, Tsarukian, Islam etc. would handle him on the mat.

Max is one of my favorite fighters. I’ve seen every single fight of his in the UFC

I definitely don’t want him at LW. I remember when him and khabib were supposed to fight (I believe it was a last second thing) I was so fucking devastated cause I knew khabib was gonna do to him what he does to everyone; take him down and maul him to death

When he fought Dustin at 155 he just didn’t look right to me for some reason. I know he cuts a lot of weight to get to 145 but he really is better off there

All that being said though I think Max should take some time off before his next fight. Alexander mirked him

Then WTF do you do with him? Hope Volk leaves 145 forever, then can win the belt again and be talked about as the guy who has the belt now that Volk left?

I don’t think Max wins the belt at 155, but I don’t think it makes sense to leave him at 145 for rematches with guys he’s already beat. He fights like once or twice per year, and I think he should move to 155 and see how it goes. Even if he doesn’t win the belt, there’s nothing left for him at 145, and I don’t think anyone gets excited about a title reign for him at 145 after Volk moves to 155.

If not then just fight at 155 and see how it goes. Or try to land the “money fight” that everyone seems to want and get his rematch with Conor once he comes back

Honestly that’s what makes most sense to me. Conor still needs time to heal and get ready for his return. Max needs time off after than brutal beating he endured. It doesn’t even have to be at LW since Conor is huge now (pause) and max cuts a lot of weight himself so they could do a catchweight at 160 or 165

Biggest win of his career right there for Fiziev. Riding a 6 fight win streak, if he were to fight and beat someone in the top 5 next then a #1 contender’s fight could happen for him. Gamrot is right there in that type of position as well but we got to see what happens next with Makhachev’s title fight and Dariush’s return.

Don’t know whats next for RDA but I bet he fights again wit year.

Missed the Johnson fight but heard it was great. Might have to watch it today.

Now we got only two guys in the top 25 booked at the moment with #16 Ferreira booked vs Klose and #24 Dober booked vs Alves. Going by the rankingmma site and looking at upcoming fights. I’ll check back at the end of the summer and I’m sure a lot of good stuff will be booked.

The Johnson fight was great. You missed a banger. I had Johnson winning rounds 1 and 3 though I thought he got robbed but it was close

I’m on board with this 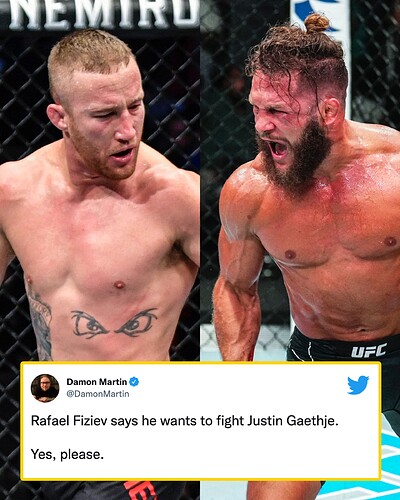 I don’t see how Gaethje beats Fiziev or Gamrot

Hope Gaethje is willing to fight an up and comer now. And Dustin vs Chandler is a good fight, hope it gets booked so we can move past it. Time has come (arguably already passed) to let the new guys in the top ten get their shots at the main stays like those three. Charles-Islam is the only fight that should be in discussion for the title. Didn’t mention Tony…want him to rest up and fight a grappler later on at some point. Too much damage absorbed, and that punt to the chin was the exclamation point on that

It’s time for UFC to feed all the ageing rank squatters to the young lions. 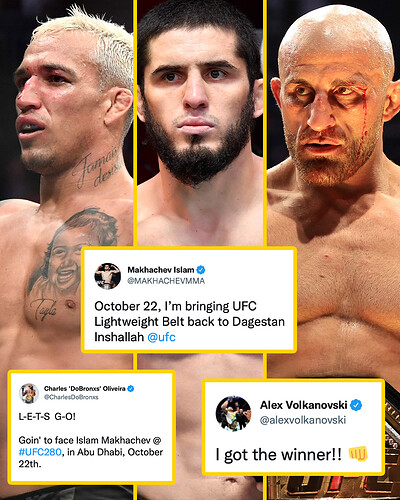 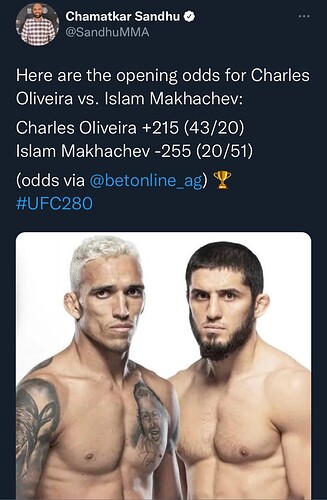