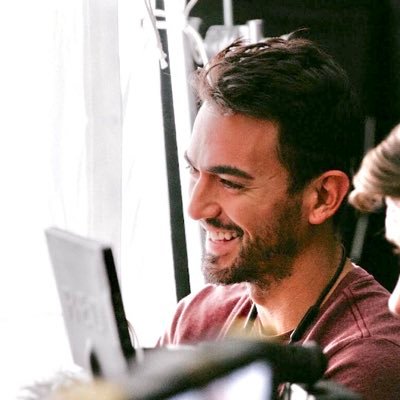 @bokamotoESPN
Talks are ongoing for a huge lightweight fight between Dustin Poirier (@DustinPoirier) and Michael Chandler (@MikeChandlerMMA). Date is still TBD. Per sources, Chandler’s preference is December. Poirier has made it clear he’s been ready to fight. Date being worked out now.
BJ_Penn_Forever August 4, 2022, 10:42am #902

Its crazy how Gillespie is still sitting out at 7-1 and saying he won’t fight down in the rankings.

We watched Khabib, RDA, Tony, Oliveira, Makhachev and perhaps soon Dariush all fighting down in the rankings to get their title shots.

Gillespie wants the Conor/Chandler/Gaethje/Pettis treatment but I don’t see it working out too well for him. UFC has endless LWs to promote, guys willing to be active.

RDA was already 12-5 when he finally got his LW title shot and the division was less stacked then than it is now. 7-1 is not shit compared to that.

After winning, defending and losing the belt, RDA then went just 3-1 to get his second title shot in another weight class so you add in the title fights and that means RDA was 14-6 after he lost the LW title and then 17-8 after he lost his bid to win the WW int. title. Still got the chance to beat Usman and be right back in the title hunt right after losing the int. title fight too. Won a fight vs the guy who just KOed Gillespie and was right back in there vs Edwards headlining a card and if he had beat Edwards, he would have been right back in the mix. After Edwards he was 18-9 in the UFC and was still fighting top 10 guys right after that.

Now he is 20-11 in the UFC and I guarantee the UFC is not done offering RDA fights that can advance him to another big fight and I don’t see it happening with his age and miles but if he were to win enough, he would be right back in the title picture.

Put another way, RDA has fought 24 guys who were ranked in the top 15 at some point in his UFC career and 8 of them were at some point the world or int. UFC champ.

Gillespie is sitting out while he has fought 2 guys ranked in the top 15 at some point in his career and neither of them ever won the world or int. title.

RDA is only two years older than Gillespie to put it in perspective.

Yeah…insane. On the bright side, he’s unranked now so he should have no trouble getting a higher ranked opponent.

It’s about as poorly as I’ve seen anyone play a hand ever. He’s currently on a one fight winning streak, and the guy that beat him is no longer in the UFC…and the ranked guy that he beat is on a 3 fight losing streak.

I really like him as a fighter, but he has one win in the last three years. He’s not in a position to demand anything. He could have fought 3 times while sitting out demanding a higher ranked opponent because he doesn’t have the time to fight down. It makes no sense. Guys like Oliveira and Chandler both fought the same month Gregor last fought, and have fought twice since AND have another fight booked.

It’s the worst holdout I can remember. It makes no sense.

With only five fights in the UFC Gamrot has really punched his ticket to the bigtime. Its almost impossible to put yourself in the LW title picture with 5 fights but Gamrot has done it. Just needs to beat Dariush and another top five fighter and he could be in a title fight.

Other guys with five or less fights who have put themselves on the map are 5-0 Ismagulov, 1-1 Kutateladze, 4-0 Madsen, Claudio Puelles is 5-1 but throw him in there anyway because kneebah and 3-0 Paddy Pimblett,

Was lucky to get by Arman but guess fight was close enough. This is an interesting fight for Dariush as I find him one of the biggest overachievers in the UFC. It’s good to see guys with primary grappling come back to the top (khabib, Islam, Gamrot). Arman is too rounded to be considered a primary grappler? Charles has the most subs in the UFC but TKO’d Chandler and went to war striking with Dustin and Gaethje, sending Gaethje to the congas worse than he ever has been floored in his career.

Even look at the guys who seemed to get the faster road to the title shot in terms of their UFC career than Khabib, RDA, Tony, Oliveira and Makhachev… they all still had a much more impressive resume than Gillespie.

Conor had already upset Mendes and Aldo for the title and was coming off the Diaz win.
Chandler was coming over a Bellator tourny champ, 3x Bellator LW champ and he had just KOed Outlaw and Bendo most recently. He had been in 11 Bellator title fights at that point and was usually exciting as hell. Gaethje came over the WSOF champ and he was the most exciting fighter in WSOF. When he got to the UFC he won FOTN in his first 3 UFC fights. POTN in his next fight and then FOTN again in his 5th UFC fight. Won another POTN in his 6the UFC fight and then FOTN once again to capture the int. title vs Tony. Even after losing to Khabib he earned FOTN once again in defeating Chandler to earn his next title shot. Pettis earned SOTN to earn his WEC title shot and then won the title in a FOTN. Even after a UFC lose he earned KOTN 2x to get his title shot where he won SOTN and then SOTN again in his first defense. Beat Oliveira to later earn a int. FW title shot.

You can look at the 72 active UFC LWs that are under contract right now, all Gillespie has done is beat #17 and #30 out of those 72 fighters. That don’t exactly scream punching your ticket to a Tony or Chandler fight. Gillespie needed to keep fighting like Oliveira and Makhachev if he wanted to get somewhere. 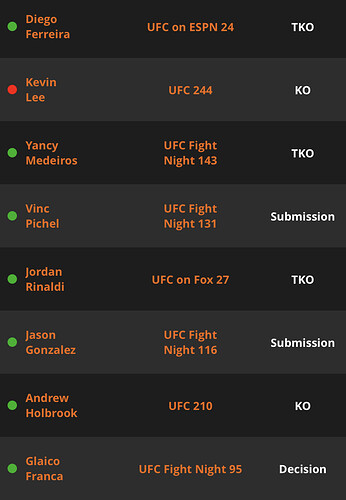 This resume should not get you into the top ten. Especially when you consider inactivity. I like Gregor but it’s bizarre behaviour. Most casuals won’t even know who he is, he has no bargaining power right now. As was already mentioned he’s on a one fight win streak, he needs to just fight. He’d be a good test for Madsen

He’s got some great finishes though at least

Terrance McKinney is becoming a LW to watch. 3-1 in the UFC at LW with all wins in the first round. I see that 12/13 of his career wins were 1st round finishes.

He was calling out Pimblett last night but I don’t see that happening next. Prior to last night’s win he was the 44th ranked UFC LW at the rankingmma site.

Its a division where the UFC has around 80 fighters under contract and you probably don’t want to miss the fights of anyone good enough to crack the top 40 of the rankingmma rankings.

McKinney vs Alexander Hernandez would be fun next.

I’d say McKinney, Pimblett and Puelles have been my favorite LW newcomers to watch over the past year.

Guys like Turner, Tsarukyan and Ismagulov have been around longer

McKinney is awesome to watch I agree. Entertaining personality to match. Hernandez makes sense. Klose just fought as well so the timelines could work out for that one too 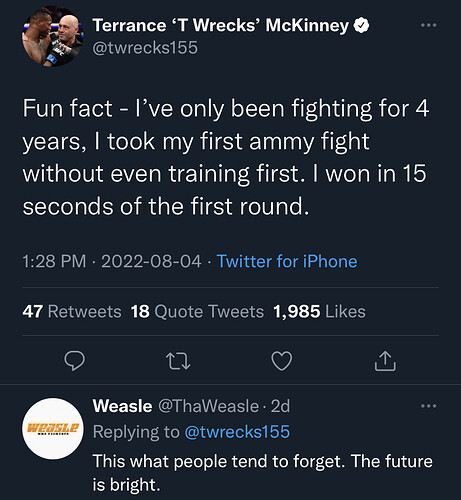 “without even training” in MMA maybe but he wrestled in high school and college.

They should feed Charles to him after Islam is done with him.

Tapology lists Poirier vs Chandler as rumored for 281: Adesanya vs Pereira on Nov. 12th.

But when tapology lists a fight on a card like this and notes “rumored”, it ends up happening like 90% of the time.

They should feed Charles to him after Islam is done with him.

TREX sleeps Islam, which is why Islam will NEVER take that fight.

Dagestani’s cherry pick and pull out better than anyone in combat sports.

Oliveira would take the fight like he always does.

I’ll dig up the amazing Dagestani pull out stats soon for you.