UFC title shots can be such a joke

Not only did they keep the wrestlers away from him, they kept Charles Oliveira away as well. Conor also only had to fight only 2x a year in 2013 and 14 to get that Siver fight to setup his title shot. Max was a 3-2 UFC fighter when they booked him vs Conor and he had just fought and lost ten weeks prior to fighting Conor. Its not like it was prime Max they fed him to. Brimage, Brandao, and Siver were all selected as opponents because they were short fighters without great wrestling and Conor would have a nice reach advantage in all those fights to utilize his boxing.

By the time Conor arrived in the UFC, Oliveira (who is a year younger than Conor) was 24 years old but had already fought Elkins, Miller, Lentz, Cowboy, Cub, Frankie etc… some at LW and some at FW. He went 3-1 in the UFC FW division in 2013 and 14 (Conor’s first two years) and beat Ogle, Hioki and Stephens and only lost to Frankie in a FOTN performance and was calling out Conor but they had Conor avoid him as well. By the time Conor got the Siver fight, Charles was a 5-2 at FW in the UFC with 4 subs and often winning POTN/SOTN/FOTN awards and had only lost to Frankie and Cub at that weight.

Yes add Charles to the curated avoid path for Connor as well.

Like I said, he could have beaten most of those guys and would have likely gotten to the title eventually but he def coulda lost one or two en route ala Pettis and they couldn’t take that chance.

Much as I love Aldo, I think Connor would have beaten him anyhow due to the size and styles. Aldo did continue to evolve at BW but I think Connor, Max and Volk’s styles were too next level for Aldo’s more limited style. May have been interesting to see Aldo leg kick Connor but he isn’t a southpaw like Poirier and at LW Poirier is much bigger than Aldo. Calf kicks also weren’t around back then.

Glad to see UFC do the right thing in the end here. 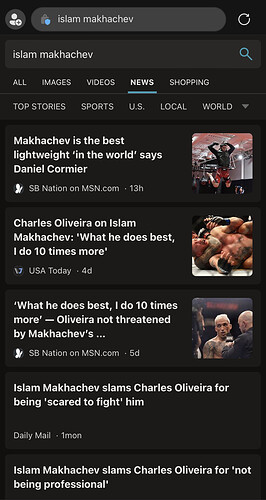