Ultimate Rumble In The Jungle 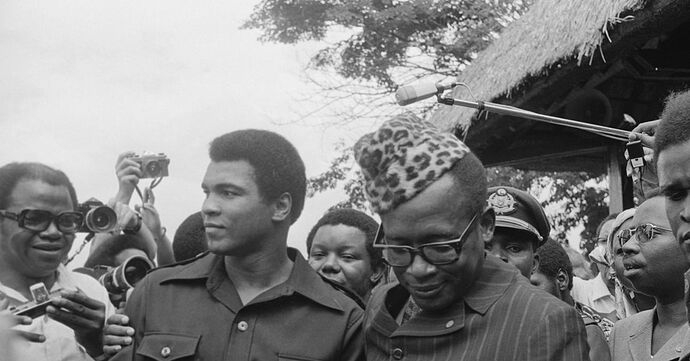 The UFC is angling for its own ‘Rumble in the Jungle’ showcase in...

Karim Zidan delves into the UFC’s Africa ambitions and the various reasons why the MMA organization should proceed with caution given the history of combat sports on the continent.

International expansion has long been a defining characteristic of the UFC’s business strategy.

Over the past two decades, the world’s most recognizable MMA organization has held major events in Australia, Brazil, Canada, China, Germany, Russia, and the United Kingdom. It also established footholds across a variety of continents including the Americas, Asia, Europe and the Middle East and North Africa (MENA) region. Now, the UFC plans to set its sights on Africa as the next frontier of its expansion efforts.

Speaking on “The Bill Simmons Podcast” in April, UFC President Dana White revealed plans to host a UFC event in Africa in 2022.

“One of the cool things is right now we have three African [champions]: Francis Ngannou, Usman and Israel Adesanya,” White said. “One of the many monumental times in my career, but one of the things that I’ve always wanted to do is have a fight in Africa.”
Nigerian-born Kamaru Usman became the UFC’s first African champion when he defeated Tyron Woodley to claim the promotion’s welterweight title at UFC 235 in March, 2019. His fellow countryman, Israel Adesanya, followed suit a month later when he defeated Kelvin Gastelum for the interim middleweight title. Cameroon-born Francis Ngannou joined their ranks after defeating Stipe Miocic by knockout at UFC 260 to win the UFC heavyweight title.

Considering that the UFC now has three African champions on its roster for the first time in its 28-year history, it comes as little surprise that the promotion is keen to capitalize on a golden opportunity to enter a new market. In fact, the UFC’s promotional machine is already hard at work promoting the potential event as MMA’s “Rumble in the Jungle.”

“The Ali-Foreman ‘Rumble in the Jungle,’ all that stuff I remember growing up, I haven’t had mine yet,” White added. “But it’s coming. We’re looking at Africa in 2022, so I’m really looking forward to that.”

While revisiting the historic “Rumble in the Jungle” event would likely appeal to combat sports fans around the world, it is not without its concerns. Few remember that the event was an elaborate example of sportswashing—a term used to describe authoritarian regimes weaponizing sports events to garner positive publicity, soft power, and to further political agendas. It was also one of the rare times that Muhammad Ali—rightfully considered to be one of the greatest athletes of all time—was on the wrong side of history.

TheThe palace at Nsele—long abandoned and left in ruins—still carries the memories of its glamorous past.

Situated 40 kilometres east of Kinshasa, the capital of the Democratic Republic of Congo, the palace had been overrun by the relentless Congolese jungle. Creeping vines encircled the ruins, while untamed grass overwhelmed the imperial Chinese garden. It resembled a desolate moor, deserted of people and forsaken by history. Those who visit the site now would find it hard to believe that the palace and its surrounding grounds were once fitted with the finest furnishings, sports facilities, a hydroelectric plant, and even an airport runway capable of accommodating commercial airliners.

The palace was commissioned by Mobutu Sese Seko, a Congolese politician who was president of Zaire (later remained the Democratic Republic of Congo) from 1965 until 1997, when he was forced into exile. Mobutu rose to power following a coup that deposed the democratically elected government of Nationalist Patrice Lumumba in 1960, whom he executed the following year.

Dressed in his characteristic leopard-skin hat and ebony cane, Mobutu presided over a period of widespread human rights abuses, including political imprisonment, forced disappearances, sexual assault, and torture. He allowed his military to plunder with impunity, which helped him maintain power for more than 30 years. His tenure and bloody record make him one of the most destructive dictators in African history. Yet despite his track record, Mobutu enjoyed strong support from Western nations such as the United States and France, who viewed him as an antidote to rising communist sentiments in Francophone Africa.

Throughout his reign, Mobutu was known for his corruption, embezzling up to $15 billion during his presidency. He was also an extravagant ruler, famous for taking jaunts to Paris on a private Concorde airliner. His economic exploitation and boundless corruption led Congo into a dire financial situation marked by hyperinflation, uncontrolled currency devaluations, and massive debt. This did not stop him from building the Nsele palace, which, for a five-week period in 1974, was home to Muhammad Ali as he prepared for the “Rumble in the Jungle” showdown against heavyweight champion George Foreman.

In 1974, Mobutu convinced promoter Don King to bring Ali to Kinshasa for a boxing event, believing that the publicity from such a high-profile showcase would benefit his regime. Mobutu had long promoted a program of “national authenticity,” banning colonial and Western influence and instead emphasizing African clothing, music, and culture. This won the approval of Ali, who as an outspoken African-American during the 1960s-70s, espoused Africanist-centred politics.
When Ali arrived in Zaire, he was greeted with respect and adoration that he had been denied in his home country (due to his stance on the Vietnam War). Ali enjoyed the pageantry and embraced the country. He also appeared to have a cordial relationship with Mobutu. There was no mention of the ruler’s despotism or his human rights abuses. Instead, the event was viewed as a boon for Africa and Zaire, exactly what Mobutu hoped would happen.

The fight was, by all accounts, one of the most successful sporting events in history. More than 1 billion viewers worldwide watched Ali, a 4-1 underdog, defeat the unbeaten Foreman to reclaim the heavyweight title, making it the most watched live television broadcast at the time. The fight grossed an estimated $100 million (worth $500 million after adjusting for inflation) in worldwide revenue and was the subject of the Academy Award winning documentary film When We Were Kings.
In one of the most successful examples of sportswashing in the 20th century, Mobutu managed to cement his name alongside one of the most influential sports events of all time. He would remain in power for another 23 years, tormenting his people while the world watched in silence.

The UFC’s Penchant for Dictators

Back in February, the UFC announced an exclusive deal for Chinese media distribution with China Mobile subsidiary Migu.

The deal, which began with UFC 259 on March 6, includes every live events produced by the organization (12 PPVs and 30 Fight Nights), all of which will be shown to viewers in China via a “UFC Fan Club” subscription package.

“There has never been more talent, more fans, and more energy and momentum for UFC in China than right now,” said UFC president Dana White, per a press release.

While the UFC’s attempt to capture the Chinese market is part of its global expansion strategy, it had no qualms working alongside a government with a well-documented history of human rights abuses.

China’s ruling Communist Party is responsible for detaining more than a million Uighurs, a Muslim ethnic minority group native to Xinjiang, in internment camps that the state defines as “re-education camps.” Reports suggest that China is forcibly mass sterilizing Uighur women to suppress the population, while others are being forced to pick cotton. There is also evidence of systemic rape and torture in the internment camps, all of which led the U.S. government to sanction top Chinese officials responsible for Xinjiang abuses in July 2020.

Beyond the atrocities against the Uighur people, China has a long history of repression and has taken active measures to limit freedom of expression, freedom of the press, and religious freedoms. This has not stopped the UFC from signalling China as one of its primary international partners.

The UFC faced similar criticism when it broke into the Russian market. During the promotion’s inaugural show in Moscow in September 2018, the UFC welcomed Chechen dictator Ramzan Kadyrov, who was seated in the front row alongside an entourage of loyal henchmen. Given Kadyrov’s well-documented human rights abuses – the most recent of which includes a deadly crackdown on LGBTQ+ people within Chechnya resulting in torture and summary executions – his presence in the front row of a UFC event highlighted the concerning link between the dictator and the world’s largest MMA promotion. 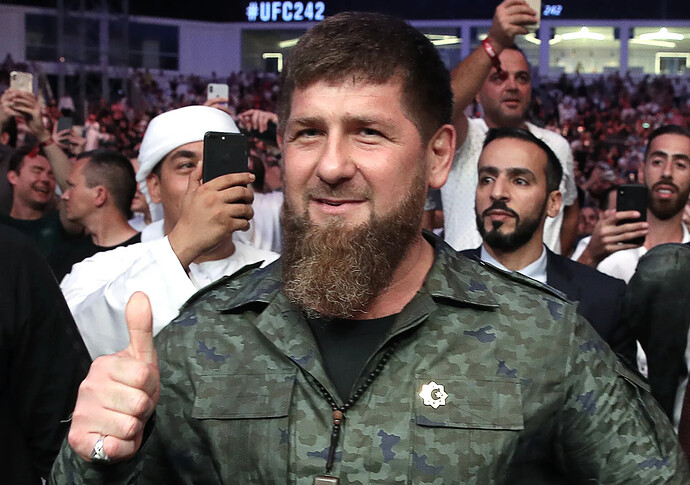 While the UFC is aware of the controversy surrounding the Chechen dictator and the UFC fighters who represent him, the promotion has chosen to remain silent regarding this potential public relations nightmare. Instead, it doubled down on the relationship and continued to sign fighters linked to Kadyrov’s fight club, Akhmat MMA.

Most recently, the UFC announced a five-year partnership with the Department of Culture and Tourism (DCT Abu Dhabi), which guarantees a constant stream of title fights in the Emirati capital until 2024. The partnership began with UFC 242, which took place in a bespoke 13,000-seat arena built specifically to host the PPV, and was further cemented during the COVID-19 pandemic when the government established a “Fight Island” 10-mile safe zone for the UFC on Abu Dhabi’s Yas Island.

While the partnership with Abu Dhabi made sense from an economic standpoint, it further emphasized the UFC’s disregard for human rights in its pursuit for profit.

According to Human Rights Watch, UAE citizens and foreign nationals who publicly speak out against the local government are at risk of facing arbitrary detention, forcible disappearances, and torture. The UAE government also limits freedom of expression by using “digital campaigns” such as surveillance technology to monitor dissidents. The UAE also maintains a leading role in the Saudi-led military coalition against Yemen, which has helped bring about the worst humanitarian crisis in the world, according to the United Nations. More than 20 million people across the country are “food insecure”, while tens of millions lack access to safe water, sanitation, and adequate healthcare.

As part of its ongoing relationship with Abu Dhabi, the UFC has also been promoting G42, a local artificial intelligence company that is reportedly involved in spyware and mass surveillance technology.

Given the UFC’s willingness to work with authoritarian regimes and despotic leaders in their pursuit for increased market share and profit, it is possible that the MMA organization will continue that trend as it sets its sights on Africa. While the UFC should absolutely hold an event in Africa, it is essential that the promotion does not end up working with a despotic regime and recreating all the worst aspects of the Rumble in the Jungle. 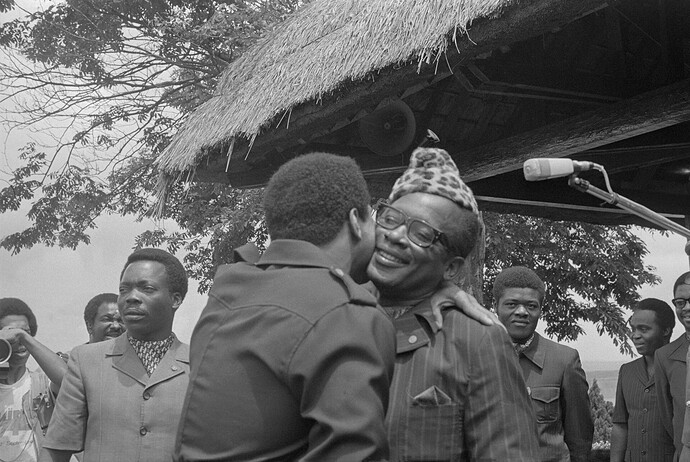 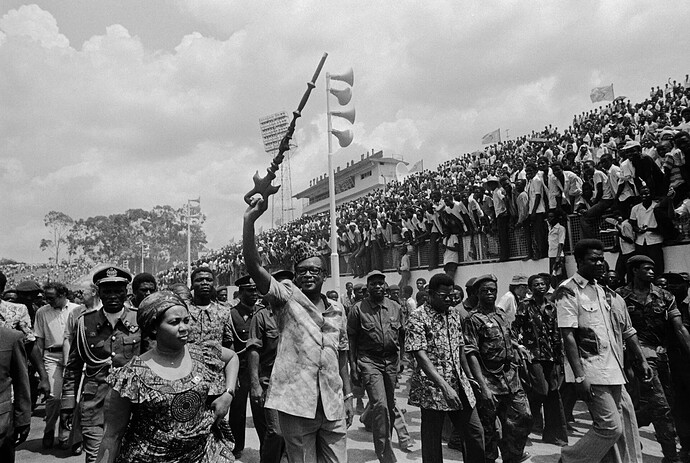 Karim Zidan delves into the UFC’s Africa ambitions and the various reasons why the MMA organization should proceed with caution given the history of combat sports on the continent.

There is a promotion that comes on here real late at night.Its called the EFC & its in Africa.They have good fights on that show.

The UFC wanted to go into Mexico when Cain Velasquez was champ,but that failed.

Jungle Fight was founded by pioneering MMA fighter and long-time Brazilian Jiu Jitsu black belt, Wallid Ismail.[3] The organization was created in 2003 and its first event was in Manaus, Amazonas. In 2006 there was an event in Slovenia, the first and so far only, Jungle Fight event held outside of Brazil. No events were held in 2007, but in 2008 it began to hold a series of events in Rio de Janeiro.

Yeah , Article seems to be a sore subject or just a Frat